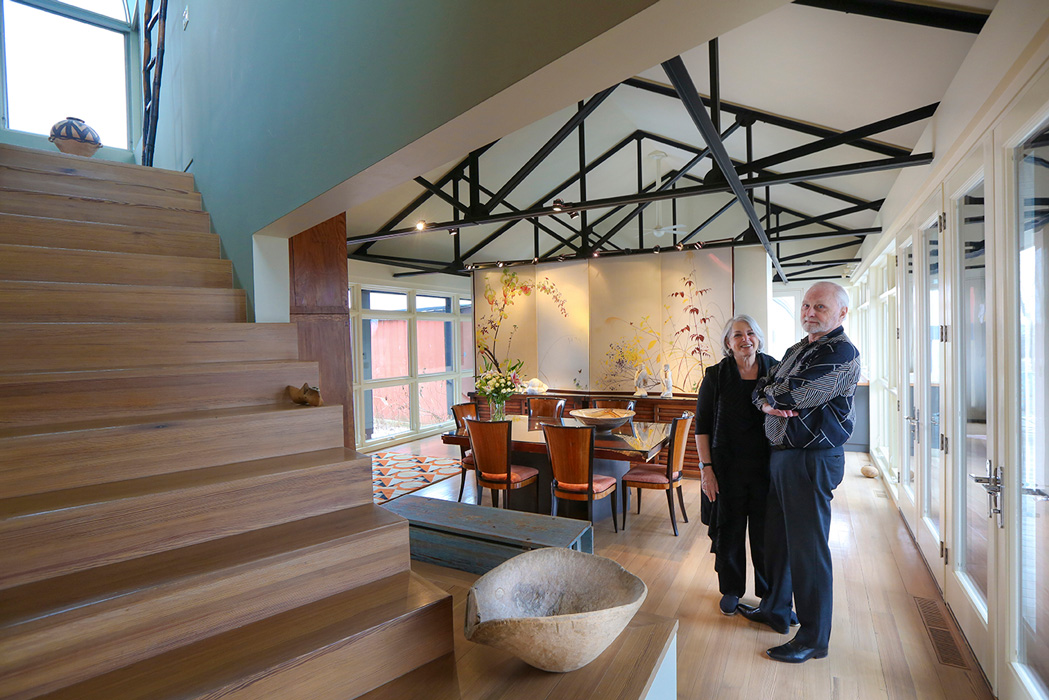 Beautiful and diverse objects reflect a shared lifetime of global travel and study.

For Marc and Elizabeth Wilson, the world is a great visual playground of “forms and shapes” awaiting discovery and investigation.

Marc Wilson is former director and CEO of the Nelson-Atkins Museum of Art, which he led for 28 years following a decade as a curator of the museum’s Oriental art collection.

Elizabeth Wilson trained as an art historian and taught Chinese and Japanese art before opening Asiatica, a shop specializing in garments created from vintage Japanese kimono fabrics and offering unique antiques and fashion items gathered during her regular trips to Japan.

The contemporary house the couple built 20 years ago in rural Platte County, Missouri, is a restful repository of objects collected over a shared lifetime of global travel and study. A delight in the beautiful and unusual and an eye for the aesthetics of the commonplace unifies widely disparate treasures, including Pre-Columbian textiles, Chinese furniture, Japanese folk art, rocks and minerals, antique tools, Modern painting and sculpture, contemporary prints and photography.

What’s your approach to collecting?

Elizabeth: We don’t collect. We just buy stuff. We look at everything, everywhere we go.

Marc: It’s all about visual interest for me. We have great experience with Asia, Africa and the ancient world.

Tell me about some of the Chinese pieces in the living room.

Marc: One focus is good Chinese furniture, like this late 16th-century/early 17th-century side table. It has a classic shape with an apron (horizontal band below the table top) and simple legs. It’s made of huanghuali wood and hasn’t been rebuilt.

And look at this court board. If you are an official at the emperor’s court, every morning you have a dawn audience held by officials. The board is a symbol of authority. It was made of Asian ivory before 1644.

This gilt bronze Han Dynasty fitting represents the Chinese idea of paradise as a mountain, and it’s full of creatures: a shaman, a lion, a deer. It represents the axis of the world as well as heaven.

The Venetian chairs, carpet and coffee table in here are from the (Laurence) Sickman collection. The museum got first choice, and then there was a sale.

Many of the things you collect are not conventional art.

Marc: We’d like to have a great Durer, Caravaggio, Matisse, a Hellenistic bronze. Unfortunately, that’s not available to us.

But any number of things can have visual punch and interest to a person who is attuned. The boot jack we’ve hung upside down looks like a fox face. It reminds me of a Picasso.

I like things that have a sense of insouciance, like this Chinese cast iron camel. It’s scratching its back to get the fleas out!

Elizabeth: If I go to a store, I’m looking for forms and shapes. I just bought this Japanese pot hook in Japan. It was used to suspend a kettle over the hearth. It would be mounted way up in the ceiling and the kettle would be suspended from a rope. I’ve been dealing and studying Japanese objects for 40 years.

On the same trip I also bought a cast iron begging bowl—a monk would have carried that—and a 19th-century Japanese folk art bowl with a pine tree design. I took pictures of them and sent them to Marc.

Elizabeth: I was disillusioned to learn that when most people leave art museums, they don’t want to buy art.  When Marc and I leave, we each think, “I would give anything to have a great fill-in-the-blank.”

One of the reasons I opened Asiatica was for people who would see Chinese art at the Nelson and think, “I would like to have a Chinese piece of furniture.”

The number one thing you have to have is the visual gene! It’s really a genetic predisposition that can be trained. I hope my store will stimulate curiosity.

The variety and scope here is amazing.

Marc: The globe is our playpen.  One of my treasures is this Chinese Warring States lamp, made of bronze inlaid with silver. A sonogram revealed an inscription beneath the layers of patina.

[block pos=”right”]  “If you display too many things they compete with each other. That was my philosophy at the Nelson-Atkins: Keep it spare so every work could remain an individual, but close and dense enough that the pieces could reinforce one another.”
—Marc Wilson [/block]

And look at this Northwest Coast Tsimshian peoples’ soul catcher. It was made out of a bear femur and worn around the neck. The Tsimshian believe that if a person is sick, it’s because the soul left the body. This imagery is all based on the killer whale, and here you can see a figure riding a killer whale.

Despite the great range of cultures, aesthetics and materials, the effect of seeing all of these objects together isn’t hectic or busy.

Marc: It’s very tranquil, but at the same time it’s energizing. That sounds like a contradiction, but it’s more of a yin and yang than a contradiction. It works on your spirit through all these visual combinations.

We keep it reasonably spare. You’ve got to keep harmony and punch. If you display too many things they compete with each other. That was my philosophy at the Nelson: Keep it spare so every work could remain an individual, but close and dense enough that the pieces could reinforce one another.

Tell me about the modern works.

Elizabeth: A friend in L.A. left me the Harry Bertoia Dandelion sculpture in her will. My grandfather was a collector, and that expressionist painting on the wall has been in our family, and I’ve coveted it. It was painted by the Blue Rider group artist, Alexei Jawlensky, and his son, Andreas Jawlensky.

You’ve collected some contemporary art too.

Marc: We have a lot of Russell Ferguson drawings. He is one of the great draftsmen of his generation.

Elizabeth: I gave that Trumpeter Swan photograph by Terry Evans to Marc. I don’t think most people would give their husband a dead swan for Christmas, but what I saw was a beautiful oval form.

The house is also a work of art.

Marc: Architects Tom Nelson and Dan Maginn brought a deliberate geometric play to the design of this house, and I love the interplay of distant nature and geometric shapes visible through the windows. It reminds me of staying in a cheap hotel in Rome—looking out, all you see is geometry.