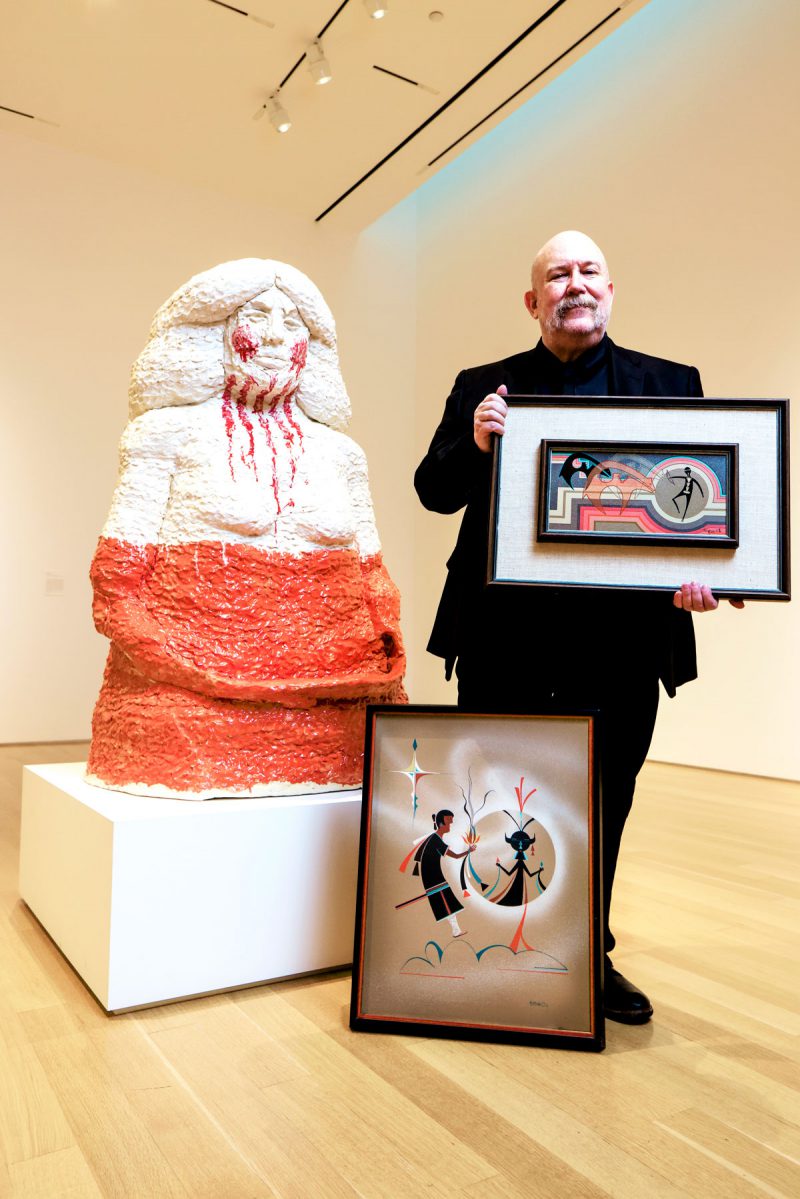 Former executive director and chief curator of the Nerman Museum, Bruce Hartman, has purchased a lot of art online during the pandemic, including (left) Raven Halfmoon’s “She’s Something Else,” which he acquired for the museum when he viewed it on Instagram. For his own collection, Hartman purchased (foreground, floor) “Untitled” (1969), a gouache on canvas by David Chethlahe (Navajo/1926-1984), and “Winter Hunt of the Bear,” an acrylic on board painting by Helen Hardin (Santa Clara Pueblo/1943-1984), buying both works online. (photo by Jim Barcus)

Any serious collector will tell you: Keep the collection going.

But that clarion call has become more of a sanity-saving song during the two-year COVID-19 pandemic.

Like everyone, collectors have had to navigate the life-changing challenges of the virus. But only collectors have had the comfort of their collections to spend more time with at home. Perhaps even the sheer act of collecting has helped to relieve pandemic-related stress.

“People always refer to collecting as an addiction and, once the bug bites you, you don’t easily give up.”

“That’s a well-earned nomenclature,” Hartman says. “People always refer to collecting as an addiction and, once the bug bites you, you don’t easily give up.”

Give up? The retired former director and chief curator of the Nerman Museum of Contemporary Art at Johnson County Community College has only amped up his online-auction bidding during the pandemic.

“Somebody once referred to me as being very predatory online,” Hartman says. “And that, I embraced. You’ve got to be. You’ve got to really be vigilant. It’s one of those things, the more you know about the wide range of works of art or objects . . . the greater the likelihood that you’re going to find something you want to buy. So, if you have wide-ranging interests, you can pretty much ensure yourself of bankruptcy.”

Before the pandemic, Hartman would devote two hours an evening to scouring online auctions. Since then, his auction eyeballing has “much expanded,” he says, whether he’s looking to add to his primary collection of Native American art, his collection of 1950s and 1960s blown-glass Italian Christmas ornaments, his collection of art of the Southwest — or really anything that might suddenly and significantly strike his fancy. And he’s not alone.

“I can’t tell you how many people have said: ‘Online bidding got me through the pandemic — it saved my life,’” Hartman says. “It certainly helped to alleviate the sense of anxiety that I think we all experienced. We have never lived through anything like this, where just by going to the grocery store you can contract something
and die.”

Better to hang safely at home and strive to enhance the collection, sometimes in ways that can’t be foreseen, Hartman says, including earlier this year, when he unexpectedly snagged a rare decanter by South Korean-born artist Chung Chu that happens to be “one of the iconic objects of the 20th-century decorative arts.”

“She made 35 of these in 1960,” Hartman explains. “I would guess that half or two-thirds of them are in permanent museum collections. Number 14 of 35 just miraculously came up at auction, and it was an incredible rush. I was both euphoric and anxious, because you never dream of being able to acquire one of these. I couldn’t believe it was being offered in an auction. But then the anxiety is: ‘Will it go way out of
my range?’”

Hartman was stunned to pay a winning bid of only $1,600 for the decanter, but he doesn’t want to call it a ‘bargain.’

“It’s a steal,” he says. “I’d never seen one for sale. I can’t even tell you what the value is. It’s one of those extraordinary things that just come out of the blue.”

“The old adage is, ‘You never regret what you buy, you regret what you didn’t buy,’” Hartman says. “I was talking to a good friend of mine, and he said, ‘Save all your money. Don’t buy anything. You’re going to go crazy at these auctions.’ I said, ‘It’s too late . . . I’ve already bought too much. I think we’re going to have to mortgage our houses.”

“I keep my eye quite close on things,” Bortner says. “The activity on the internet has definitely increased for me . . . and I get a package almost every day.”

“You just have to be patient,” he says. “Because eventually, that item that you’re thinking about, that you really want to add to the collection, it will turn up. It’s just a matter of how many other people are thinking the very same thing.

“And I’ve noticed some of the things that I’ve had for quite a while, that I know are rare, have started showing up a little bit more. Because I do believe that, during the pandemic, people have had more time to go through their collections and say, ‘Yeah, I found this in the closet, and why don’t I put it on eBay?’”

Although he misses socializing with fellow seekers of fascinating stuff at collectibles shows and antique, estate and garage sales — and he looks forward to when all such events will return in full force — Bortner is biding his time collecting at home. Fortunately, that’s where he keeps his sizable toy collection in several dedicated rooms, including a growing collection of late 1950s and early 1960s toy guns that elicit a favorite reminiscence.

“As a kid, I’d call up my best friend, Charlie, and say, ‘Hey, let’s have a war,’” Bortner recalls. “And, boy, he’d come running over with his little cap gun and we’d go out to the weeds and just have a good time. We all did.”

Bortner has taken the pandemic time on his hands to teach himself how to restore some of his toys’ original exterior cardboard boxes with the delicate use of Japanese paper, wheat paste and acrylic paints. He’s especially happy with the transformation of the box for his 1970s Ideal Toy, Electroman.

“The box was mangled and torn and discolored,” Bortner says.“So I had to iron it. I had to redo the colors in several sections. I had to definitely repair rips and tears. And I think it looks pretty darn fine right now. It’s a wonderful thing when you’re involved in an activity that you really enjoy, and you’re not really thinking about the fact that you’re somewhat secluded because of the pandemic.”

Bortner is also displaying more of his collection during the pandemic. He’s done it for himself, but also anticipating eventual post-pandemic get-togethers where the toys can be touted.

“In the back of my mind, I always wanted to display the collection more,” he says. “If you have it in boxes, you’re not really enjoying it as much as if you’ve got it out and can look at it and talk about it and show folks. But I’m running out of room. And I keep buying, which is a problem.

“There have been times where the wife has said, ‘One thing in, one thing out,’ and I went along with that. But that came down to sneaking things in the basement . . . but I did sell for a while. I actually regret some of the items I let go.”

Bortner graduated with a bachelor’s degree in sculpture from the University of Kansas, and his bronze cast statue of Kansas City native and social activist Bernard Powell was installed in 1991 in Spring Valley Park.

“I do look at these toys as art, I really do,” he says. “Sculpturally, they are beautiful. I look at some of them and I say, ‘Man, I wish I could do that. It’s done so nicely.’”

Vintage comic book dealer and collector Denny Cox has weathered the pandemic by hosting GarageCon comic shows in the driveway of his Leawood home.

Vintage comic book dealer and collector Denny Cox has weathered the pandemic by hosting GarageCon comic shows in the driveway of his Leawood home.

“I had done a couple of GarageCons before the pandemic,” Cox says. “But then I was like, ‘Well, this is perfect for the COVID time, because people can be outside and still look for and buy the comics that they want.’”

At a typical Saturday GarageCon, Cox will offer comics for sale from inside his open garage, while several other comic dealers will line his driveway.

“I have a list of about 20 vendors that are friends of mine,” he says. “And I don’t charge them anything to bring their own tables and set up” on a first-come basis, until the driveway is full, he says. “The more the merrier.”

Merrier might be an understatement. The chance for collectors to have a relatively safe place to confab and shop for comics during the pandemic was greeted with a heady mix of exhilaration and gratitude.

“People were absolutely jazzed,” Cox says. “I had people patting me on the back and saying, ‘I’m so glad you did this. My sanity needed this.’”

As a health and safety manager for environmental and engineering consulting firm Tetra Tech, Cox was also hyper-cognizant of taking proper precautions for GarageCon. “I required masks,” he says. “And I told the vendors to have hand sanitizer on their tables to allay some of people’s fears.”

Worries will likely continue to ebb and flow amid the lingering pandemic. But Cox is optimistic. He predicts the eventual return of even the most COVID-leery collectors, who may have entirely backed away from the in-person marketplace.

“In the next couple of years, I think you’re going to have a lot of people — who maybe felt like they missed out on something — feel like they have to get back,” he says. “That’s a possibility.”

A less likely prospect is that Cox will ultimately sell any of his prized personal collection.

“I’m still a collector,” he says. “There are still books that mean something to me.”

Those include Cox’s copies of Incredible Hulk 181 (first full appearance of Wolverine), Fantastic Four 4 (first Silver-Age appearance of the Sub-Mariner), and his sentimental favorite, Giant-Size X-Men 1 (first appearance of the new X-Men), which he laid out $100 for as a teenage fanboy more than 30 years ago.

Is he sure that’s marked-up enough?