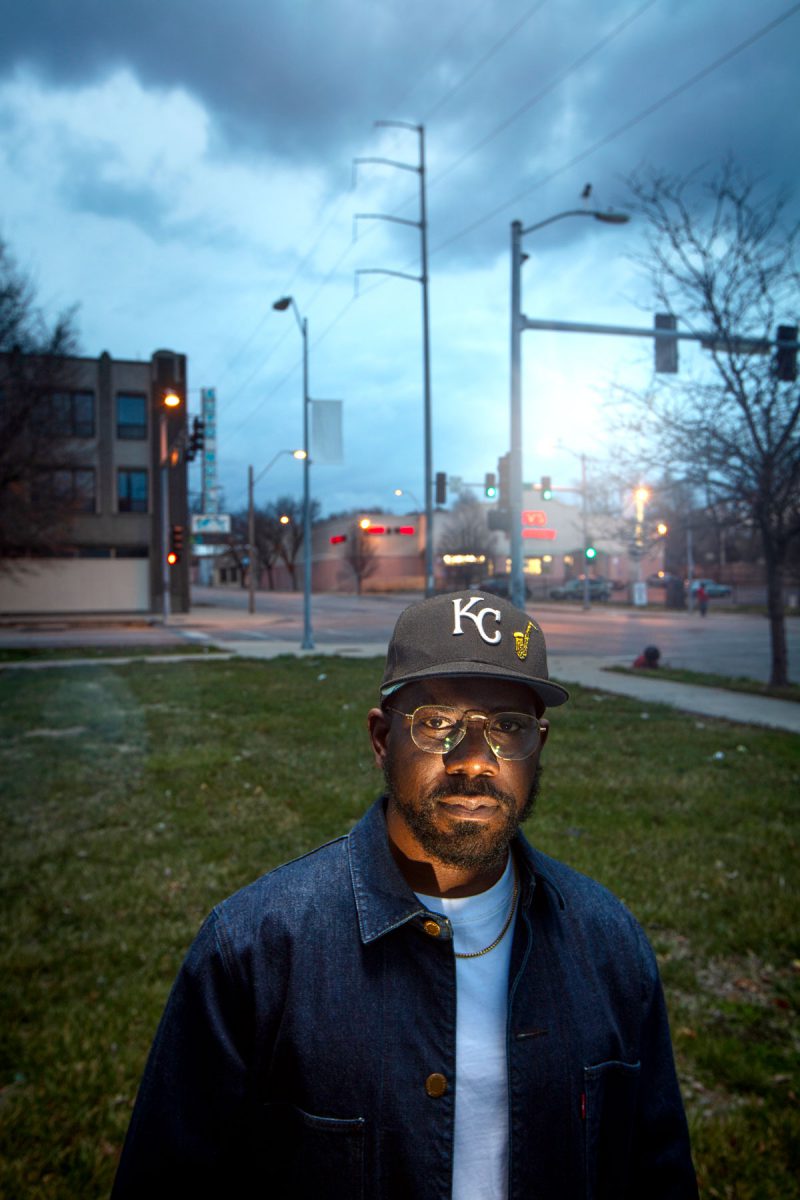 Artist William Toney photographed at 43rd and Troost, where he once lived and was a part of his daily commute. The ongoing changes provided inspiration for his photographic investigation of the area, including a series showing an auto body shop going through the process of being abandoned. (photo by Jim Barcus)

Showcased in a recent exhibition at UMKC Gallery, the Kansas City photographer is drawing praise for his exploration of the African American experience and insights into urban domestic life

Long has photography taught us about the passage of time, the mercurial depths of change and what was or will be.

For photographer William Toney, photography is a way of honoring his experience as an African American and artist while engaging wholly with time and place.

His street photography, still lifes and installations explore the personal, the cultural and the sociopolitical in conversation with assemblage and storytelling. Pinpointing everyday objects such as milk crates and clipper guards, he “flips” them through studio construction.

This year, the UMKC Gallery of Art presented a body of his work in a solo show, called “Grayscale.” “A lot of the work that I’ve made in the past few years has been about growing up in Kansas City, about my direct involvement in the community,” Toney said.

The work touches on themes including joy, agency and change.

A Kansas City native, Toney graduated from Raytown High School. He then moved to Columbia, Missouri, and earned a BFA in photography from the University of Missouri-Columbia. After returning to Kansas City, Toney landed a job as a preparator at Kemper Museum of Contemporary Art.

For some images, decidedly linked with the domestic interior, Toney selects objects from his family members’ homes that are significant to Black culture and a personal and collective experience, extending them through arrangement and juxtaposition. “What I’ve been doing is coupling those things with objects that I find around Midtown Kansas City. To see what it is like to pull on a collective memory but also abstract that experience,” Toney said.

Narratives take on different lives, he says, depending on who is “in front of the camera or behind the camera.” “The ability for Black people to tell our own stories is a wonderful act of refusal.” In Toney’s work, this refusal (to adhere to stereotypical or popularized notions of Blackness or the Black body) becomes an act of kindness, kindness to the self and to past and future generations.

The work reaches outward, catching and arranging materials not as a singular expression of the Black diaspora but as a possible lamppost from which to view a culture and experience. “Although the black and white series has been the most recent development, I really like shooting in color,” he says. Also, Toney demonstrates his knack for presenting how materials shift with time, as in a series that shows a building on Troost Avenue at different points in time or a photograph of a miniature statue of “The Thinker” with a keen attention to residue and light and shadow.

And he is interested in the ways that photography has been used as an abolitionist tool. Toney references Frederick Douglass and Gordon Parks in this regard. “I started with documentation and lately . . . the thing that has been interesting to me is to take the body out of the photographs and rely more on the studio and the construction of still lifes to tell the same story or speak for
a community.”

“I think people are paying attention to Kansas City and there are a lot of artists coming out of Kansas City that I’m very excited about,” he added. “I’m inspired by them.”

Robert Brown is a poet and multimedia artist who works with the Foundation Department at the Kansas City Art Institute. His poems have appeared in “Chicago Quarterly Review” and Kansas City Ballet educational materials.