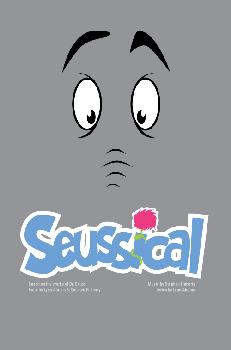 Seussical, one of the most popular new musicals in the United States performs now through Dec. 31 at the Coterie Theatre in Crown Center.

This musical celebration of Dr. Seuss tunefully interweaves the plots of Horton Hears a Who and Horton Hatches the Egg. Though jeered by others, Horton takes on the quest to save the tiny planet of Who and at the same time attempts to protect Mayzie’s abandoned egg, leading us to witness a stirring lesson in standing up for the rights of all living things. “After all, a person’s a person, no matter how small.”  In 2004 with full support of the authors, the Coterie premiered this unique professional theatre for young audiences version of Seussical by the Tony Award-winning team of team of Lynn Ahrens (lyrics and book) and Stephen Flaherty (music and book). Critically acclaimed, the Coterie was credited in The New York Times for originating this innovative version “for all ages.” Seussical has since become a modern classic and favorite among audiences in Kansas City and the around the country.

“The Coterie production glows with whimsy and restraint, its inventive puppetry, its simplicity, imagination and witty direction,” said Lynn Ahrens, book and lyric writer of Seussical.  “I love this show,” said Director David Ollington who served as the choreographer on the previous Seussical productions at the Coterie. “It is fun and zany, but it also has relevant themes of tolerance, responsibility and body image. It’s easy to come at it with a fresh eye and new start.”  After all Friday night performances, there will be a free Something Fun experience. Audiences may enjoy an opening night reception, an autograph and photograph session with the Cat and the Hat, Horton and friends, a dance lesson with the cast, or even a comedy spoof of Dr. Seuss. The experience will change each week.

Seussical is the first of three productions in the Coterie’s Family Series and is funded in part by the Missouri Arts Council (MAC), the ArtsKC Fund and the Neighborhood Tourist Development Fund.

ABOUT AHRENS AND FLAHERTY
Lynn Ahrens and Stephen Flaherty won the Tony Award, Drama Desk Award and Outer Critics Circle Award and received two Grammy nominations for their score of the Broadway musical Ragtime. They also garnered two Academy Award nominations and two Golden Globe nominations for the songs and score of Twentieth Century Fox’s animated feature film, Anastasia. They are co-creators of the Broadway musicals Once On This Island (eight Tony Award nominations, London’s Olivier Award for Best Musical). The theatre for young audiences version of Once On This Island premiered at the Coterie in 2007. The Coterie has also produced their musical Twice Upon A Time: The Lorax and The Emperor’s New Clothes, as well as School House Rock by Lynn Ahrens.

Notable Dates: Nov. 4, Opening Night: Free post-performance reception with director and Company.
Nov. 5, 12, 19, and 26, Dec. 3, 10, 17, and 31 TARGET SATURDAYS: One free ticket and book(one per order; restrictions apply)
Nov. 5 and 6, Q&A: Free post-performance question and answer sessions with the Company.
Nov. 10, 18, 25 and Dec. 2, 9, 16 and 23: Something Fun Friday Night! A free post-performance event that may be a photo and autograph session with the Cat in the Hat, Horton and other friends, a dance lesson with the cast, a comedy spoof or another fun surprise. Event will change with each performance.
Nov. 19: Interpreted performance in American Sign Language