We’ve all heard phrases like that as we grow older. Phrases designed to reassure us that we haven’t lost our youth. Or our vibrancy.

Yes, with each passing year, our bodies get creakier. Our waistlines expand. Our hairlines recede. Our laugh lines become wrinkles.

But we also settle. Into our wisdom. Into our experience. We worry less about what others think and more about what fulfills us. We start to become the best version of ourselves.

Rensenhouse’s resume reads like a dream: national tours of “The Lion King” and “Noises Off.” Guest spots on “L.A. Law” and “Thirtysomething.” A stint as a villain on the soap opera “The Edge of Night.” Playing the title roles in “King Lear” and “Macbeth.”

“I was drawn to a life in theater because I have always loved the sense of community that comes with doing a play,” Rensenhouse says. “The relationships you forge are surprisingly close and true. There was also my genuine fear of a 9-to-5 job. And, of course, the promise of changing the world!”

Once called “Best Kansas City Version of George Clooney” by “The Pitch,” Rensenhouse is now a fixture in the Kansas City theater scene.

“I’m a Taurus,” Rensenhouse says. “I crave routine and stability. I came to KC one summer, in 1997, to perform at the Shakespeare Festival, drove down a street and saw the perfect house with a for-sale sign in the yard. Bought it.”
Since making Kansas City his home, Rensenhouse has worked with the Kansas City Repertory Theatre, the Unicorn Theatre, UMKC, and Kansas City Actors Theatre, where he serves on the board of directors.

“My favorite KC productions have been ones where I’ve been on the directing end of things,” Rensenhouse says. “Top of the list is probably ‘Desdemona,’ which was the first thing I directed for Kansas City Actors Theatre. It was very intimate, and I added a lot of wild musical interludes. It was thrilling to see something I created actually work!”

Rensenhouse still works outside of Kansas City. In March he’ll be at the Resident Ensemble Players in Delaware in a production of “A Flea In Her Ear,” which will be revived in July at the Westport Country Playhouse in Connecticut. In between those two gigs, he will appear on stage at Union Station in the Kansas City Actors Theatre production of “Skylight.” In September, he will direct “Dracula” for the Kansas City Actors Theatre and the UMKC Theatre Department, staging it at Spencer Theater where, 30 years ago, he played the title role for the Kansas City Repertory Theatre.

“Eventually I’d like to bring a work I have written or adapted to the stage,” Rensenhouse says. “I’ve spent my life helping to tell stories that other people have made, and that’s been wonderful, but I want to try my hand at creating my own.”

“I don’t have a bucket list, though,” Rensenhouse says. “I’ve never really lived my life that way. I try to take what’s at hand and make the best of it without looking beyond to other possibilities. Be where I am; stay in the moment.” 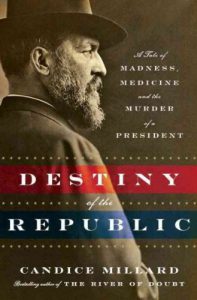 From her office in Overland Park, Candice Millard makes history into a story. And one that people want to read.

Three of her books have been named a best book of the year by publications, including the “New York Times” and the “Washington Post.”

And she’s only written three books so far.

Her books have been described as “slice-of-life biographies.” In her hands, Winston Churchill, James Garfield and Theodore Roosevelt become characters in narratives that bring people and events in distant eras to vivid life.

She didn’t set out to find a niche in nonfiction, but she has. In 2017 she received the BIO Award from the Biographers International Organization for her contributions to advancing the art and craft of biography. She adds this award to the numerous other awards her books have won.

Millard is currently at work on a book about the discovery of the source of the Nile, a subject she fell in love with more than 20 years ago, when she was working at “National Geographic.”

“In my experience, the secret to happiness is not self-indulgence or even self-reflection,” Millard says. “It’s hard work and thinking about someone other than yourself.”

Last year, Lisa Merrill Hickok was presented with the Kansas City Ballet’s highest honor, the Pirouette Award, for her nearly 50 years of commitment to the Kansas City Ballet. Her relationship with the company began in 1970 when Hickok danced the role of Clara, the young girl who falls asleep and dreams about a prince, in the first full-length production of “The Nutcracker” in Kansas City produced by Kansas City Ballet. She danced the role for four years, until they couldn’t lengthen the costumes anymore. After her turn as Clara, she became an apprentice at age 12. The next year, at 13, she became a full company member and danced with the company for seven years.

After Hickok retired from dancing, she became a member of the Ballet’s board of directors. She also founded the Ballet’s library and archives and continues to collect and document the growing collection.

In 2014 Hickok founded Merrill LLC, helping small businesses and non-profits like the Women’s Foundation and Heartland Men’s Chorus with their marketing, fundraising and event planning. She still performs when she can, most recently taking a twirl on stage for the 2017 Dancing with the KC Stars. But her most cherished moments are spent with her family and her dogs.

“Living so close to a public park, I often find myself walking my dogs past the playground,” Hickok says. “It’s exhilarating to watch the children. Running with recklessness. Belly-laughing with friends. Climbing to heights without panic. Hugging each other for longer than seems they can breathe. Twirling round and round until they’re dizzy enough to fall down. Creating new games and letting their imaginations run wild with no fear or care in the world. I encourage everyone to find their playground. Live, love, create and play with abandon.”

Julián Zugazagoitia, the director of the Nelson-Atkins Museum of Art, has a Wilbur Niewald painting hanging in his office.

Niewald’s paintings have a deep and persistent connection to his lifetime home of Kansas City. He was born here in 1925 and studied at the Kansas City Art Institute, graduating with his BFA after taking a hiatus to serve in the Navy during World War II. He earned his MFA from KCAI in 1953 and joined the faculty.

After developing a unique abstract language for his paintings in the ’50s and ’60s, Niewald began to paint in the representational style in 1970, and has continued exclusively in that vein in the decades since. Niewald’s timeless still lifes, studio portraits and landscapes are invariably executed through direct observation in a persistent endeavor to render familiar scenes with new clarity.

At 93, Niewald has been painting for more than 80 years. But he is still focusing on the process, not his legacy.

“A lot of the meaning of painting for me, it’s the moment of doing it,” Niewald says. “The real pleasure is in the act of learning, discovering and being satisfied maybe to have realized something.”

Kansas City-based Danny Embrey has earned a reputation as one of the world’s leading jazz guitarists. In addition to recording and playing concerts, festivals and club dates, Embrey is in demand as an arranger, composer and producer.

During the 1980s, Embrey toured and performed with Sergio Mendes and traveled the globe. He played for King Hussein in Jordan and the Reagans in the East Room of the White House. He also appeared on “Solid Gold,” “The Merv Griffin Show” and “The Johnny Carson Show.”

Embry’s Kansas City connection began with a musical partnership with Karrin Allyson. He appears on eight of her recordings, has toured worldwide as her musical director, and co-produced two of her albums — “I Didn’t Know About You” and “Azure-Te.” He has also recorded with Interstring, Mike Metheny, Angela Hagenbach and numerous others.

At this point in his career, Embrey says he has slowed down a bit. But slowing down for him means starting a new band; it’s a jazz combo of five guitar players called Enormous Guitar.

“Music is a never-ending process,” Embry says. “I’m constantly working on new songs and new techniques. I’ve been at it for 50 years, and I still feel like a kid when I pick up my guitar.”

Krista Lang Blackwood is an award-winning educator, performer and freelance writer. When she's not teaching or performing, she combs the greater Kansas City region for off-the-beaten-path arts and culture offerings, usually in the company of her husband and precocious, French-speaking son.