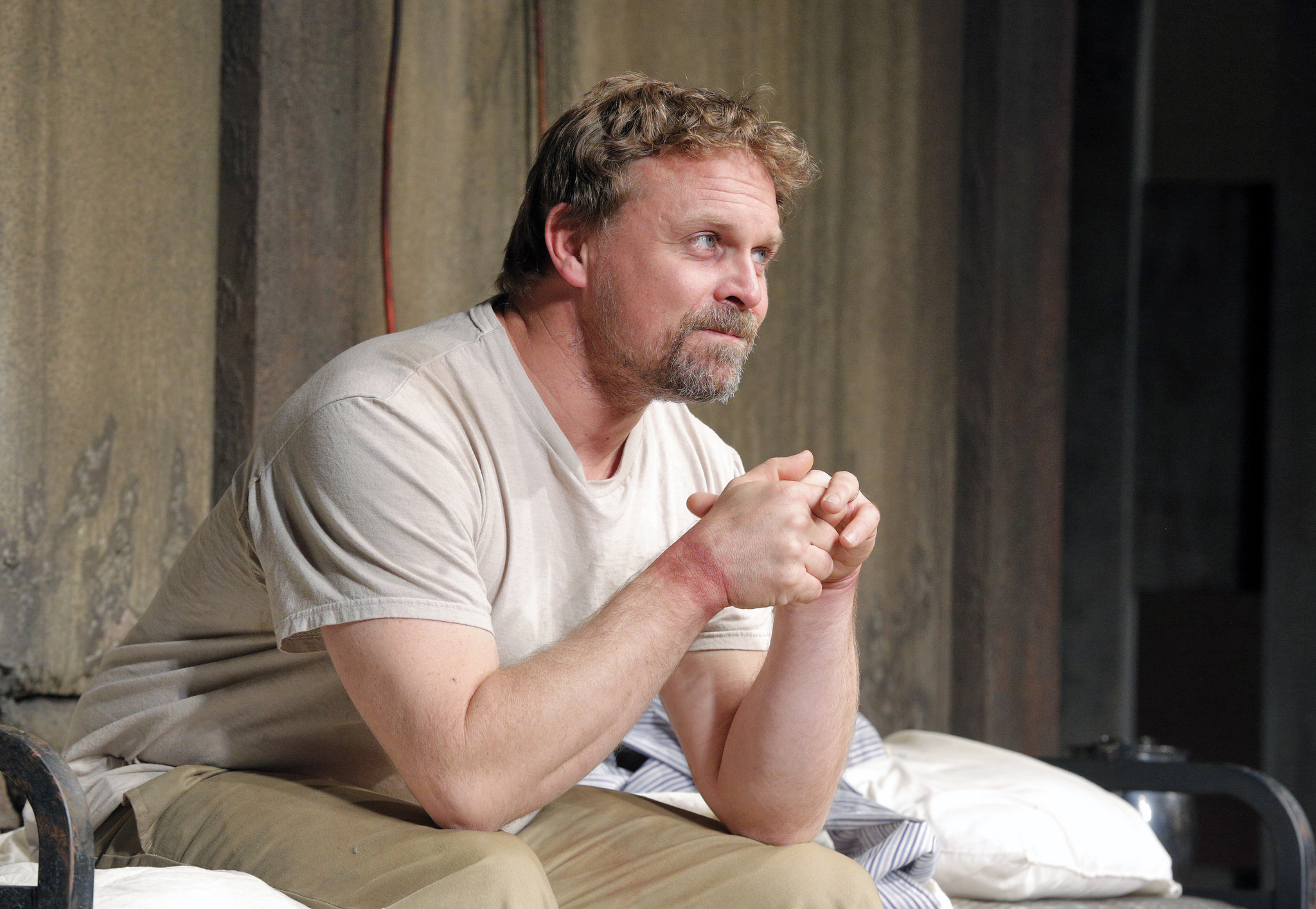 Ayad Akhtar’s The Invisible Hand is a brainy thriller balanced precariously between a melodrama and an international finance seminar.

It’s fascinating, unique and even educational as nuanced characters engage in crisp exchanges about capitalism, money laundering, international currency markets and the First World’s exploitation of the Third World.

Kansas City audiences first encountered the prize-winning Pakistani-American playwright two years ago when Kansas City Repertory Theatre staged his compelling family drama, The Who & The What. Clearly, Akhtar has a lot on his mind. His well-crafted plays offer convincing characters and a view that suggests that everything — from middle-class immigrants struggling with assimilation to international terrorists — boils down to politics.

The play, set in the “near future,” opens in a cell somewhere in Pakistan where a Citibank officer is held hostage by a small group that doesn’t seem to be part of any established Islamist terror network.

Nick Bright (Jason Chanos) remains handcuffed at all times. He tries to reason with his captors — the initially friendly Dar (Neal Gupta), the abusive Bashir (Andrew Guilarte) and their leader, the thoughtful Imam Saleem (Rock Kohli) — by explaining that their $10 million ransom demand is unrealistic.

Nick proposes a solution: Let him raise the money by playing the market. Soon the British-born Bashir becomes an apprentice as he makes trades on a laptop according to Nick’s instructions. Nick schools him about buying futures and the art of betting for or against a company’s performance. Bashir, as it happens, is turned on by the numbers game and he and Nick develop something close to mutual respect.

At one point Nick escapes through a hole in his cell wall only to be returned and chained to his metal-frame bed. Ultimately — and, I might add, predictably — there’s a falling out among thieves as Bashir, emboldened by his new-found trading expertise, makes a power play. But I did not see the play’s bleak, ironic conclusion coming, which shows once again that Akhtar knows how to lead an audience.

The opening-night performance lacked the most important quality in a play purporting to be a thriller— tension. Despite the high stakes, the situation smacked more of gamesmanship than life-and-death desperation.

It also failed to communicate the forced intimacy inherent between a hostage and his kidnappers. I watched the the play from the nosebleed section of Copaken (where many other theatergoers will see the show during its run) so it is possible that people closer to the stage picked up on a bit more tension and intimacy than I did. But who can say?

The show boasts fine performances by Guilarte and Kohli. Both Bashir and Imam Saleem undergo remarkable transitions during the course of the play, which the actors handle with impressive skill. Gupta is effective in the minor roll of Dar.

Chanos, who has demonstrated his superior acting chops on Kansas City stages for years, seems a bit of a cypher as Nick. A little more humor in the performance would be welcome.

Akhtar sees both tragedy and absurdity in the play. The absurdity should yield comic moments, but there are precious few in this production.

One advantage to watching the show from a distance is the ability to fully appreciate Jeffrey Cady’s projection designs. Projections are almost obligatory at the Copaken, a problematic space that positions half the potential audience too far from the stage, and Cady’s fine work includes both compelling abstract imagery during scene transitions as well as supertitles below the stage stating the passage of time between scenes.

Another key design element is the sound. Andrew Pluess provides the frequent whirr of overhead drones and distant explosions as they hit their targets. Pluses also composed the ominous, atmospheric music.

So yes, this is a sharp-looking production with flaws. But the play itself gives viewers plenty to think about on the drive home.