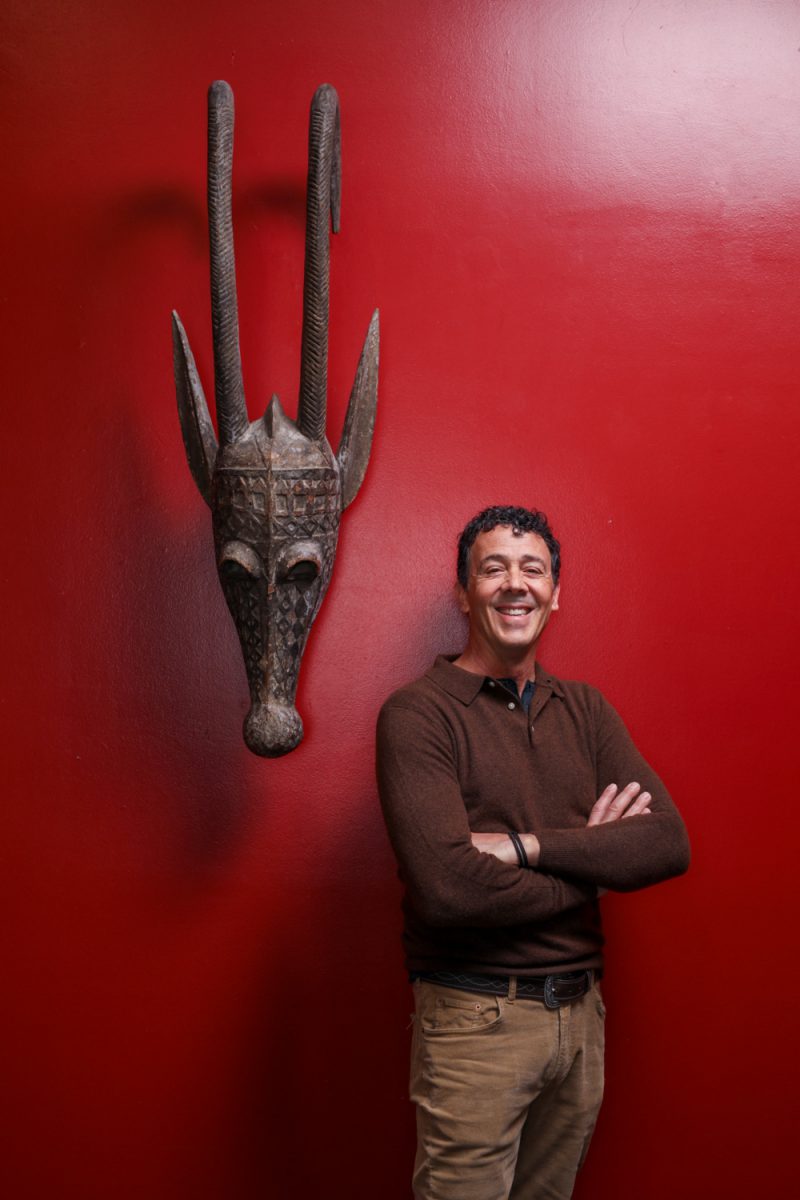 From prints by Thomas Hart Benton to antique butter churns and notable Kansas City collections, auctioneer Dirk Soulis has sold a wide range of valuable objects since establishing his eponymous auction business in Lone Jack, Missouri, in 1997. Soulis’ top offerings last year included the estate of American Legacy Gallery owners Jack and Georgia Olsen and works from the estate of Morton and Estelle Sosland, major benefactors of The Nelson-Atkins Museum of Art.

Soulis came to the auction business via a meandering path that included studies in English and history at the University of Central Missouri in Warrensburg. Prior to college and encouraged by a brother in the jewelry business, he learned how to repair jewelry and developed an interest in antique jewelry.

By 1985 Soulis was working at a Saturday night auction in Freeman, Missouri, a small town about 40 miles south of Kansas City. The family that organized the auctions also owned an antique shop, where the store’s proprietor, Merrillee Mickelson, also happened to be the principal at Soulis’ grade school. Soulis still remembers when she confiscated a switchblade from him in fifth grade. Mickelson’s son, Kent, acted as the auctioneer every Saturday night at their weekly mixed consignment sale. Soulis gradually began to buy and sell all kinds of items on his own, frequenting the Pier Show in New York, the Brimfield Flea Market in Massachusetts and other venues. He also attended Missouri Auction school where he honed his skills at calling bids.

Today, Soulis is considered a “highly regarded auctioneer,” says Bruce Hartman, former executive director and chief curator of the The Nerman Museum of Contemporary Art.“ He presents some of the most important and exciting art auctions in the region. I’ve acquired a number of works at his auctions, both for myself and the museum.”

Soulis Auctions has six full-time employees and takes on additional staff during sales. Auctions are scheduled every other month, each with two or three sessions. The majority of works Soulis sells are offered without reserve, a minimum price used by many auctioneers. While sales for higher-priced works will be sold by live auction in Lone Jack, some of the more moderately valued collections will only have bidding by phone or via the internet.

“I really respect Dirk’s knowledge and sense of curiosity. He is constantly pushing himself to learn more and to reinvent how he showcases his sales.”

Over the years, Soulis has sold many notable Kansas City collections.“One outstanding sale from this last year (2021),” he said, “was the estate of Georgia and Jack Olsen. We sold their personal collection of fine art that we removed from their home where it covered the walls from floor to ceiling. It took us three auctions. They operated American Legacy Gallery here in Kansas City for nearly 40 years, and as we talked to their family and many former customers, we heard many interesting stories about their travels to Santa Fe and elsewhere to buy works directly from artists like Gene Kloss, while they also represented many local artists, including their handling of the estate of Birger Sandzén.”

During the first week of December 2021, Soulis offered items from the estate of Morton and Estelle Sosland. The Soslands were well known both for their collecting and their philanthropy, including their 2009 gift to the Nelson-Atkins of their collection of Northwest Coast art as well as their support of the museum’s new Native American galleries that opened the same year. While many items from their estate were donated to institutions or dispersed among family, there were still more than 400 lots offered by Soulis. Ethnographic art, art books, designer fashion, modern furniture, and American and British silver were just some of the types of items included in the auction. One highlight of the consignment was a silver tureen created by Paul Storr in 1810.

The highest price for anything sold by Soulis Auctions (as of this writing) was a 1943 oil painting by the American artist Henry Koerner, “Tailor’s Dummies”; it sold in December 2014 for $235,000.

Soulis’ auction slated for February 2022 will include a selection of 35 lithographs by Thomas Hart Benton. The star of the group is “The Station” from 1929, a rare early work with an edition size of just 10 impressions. It is expected to fetch between $10,000 to $12,000. Soulis will also be offering more than 200 pieces from the Sawa Boulden Collection of French cameo and American art glass. The pieces range in value from $200 to $10,000.

Soodie Beasley, formerly a Kansas City appraiser and now a fine and decorative art appraiser with the IRS in Washington, D.C., worked as a consultant to Soulis Auctions beginning in 2009. “I really respect Dirk’s knowledge and sense of curiosity. He is constantly pushing himself to learn more and to reinvent how he showcases his sales.”

Beasley believes that Soulis was ahead of the curve when he experimented using different online platforms. “He was very astute to link with LiveAuctioneers early on,” she said. (LiveAuctioneers is a website that presents auctions as they unfold in real time, allowing collectors to bid from wherever they might be located). “He was able to reach not only a broad national audience but many international buyers as well.”

Soulis believes that the internet has made huge changes in the business, citing an experience from early in his career. “After selling a full set of Dazey churns made in St. Louis, Missouri, (including the rare one-quart number one size), another auctioneer made the comment, ‘You will wear out your set of tires before you see another one of these.’ Now with online access, one might be able to see two in a week and safeguard their tires at same time.”

The internet also made a huge impact on clients’ ability to bid remotely. Soulis Auctions was one of the first five auction houses in the world to incorporate online bidding into its business. Soulis joined forces with the earliest and rather primitive iteration enabling online auction participation in May 1999. At that time, Soulis noted, “Some of my local competition did not even have websites.” Four years later, he aligned with LiveAuctioneers.

During the pandemic, Soulis devised a novel approach to safeguard the health of his clients. “In 2020 I held what I called Americana Week in Missouri when we sold back-to-back sales of American and Folk Art, he said. “In response to the pandemic, we held these auctions outdoors under a tent and offered what was the undisputed world’s first drive-in auction where bidders could sit in on the action less than 40 feet from the auctioneer and bid from the safety of their car. And they did. They could listen to the auctioneer over the loudspeakers, or they could tune their radio to an FM station and listen to the auction broadcast live there.

“Last month,” he added, “one of the attendees who used to come to the Freeman auctions over 30 years ago sat in his truck at our Oct. 22 auction. He stayed all day bidding throughout the auction from his pickup truck window, while we conducted the sale under a tent in our parking lot. Afterwards I said to him, if it weren’t for reality, he might’ve told his wife, ‘I had the strangest dream last night — I dreamed I was at an auction sitting in my truck bidding on items and Dirk Soulis, that kid that worked at Mickelson auction, was the auctioneer.’”