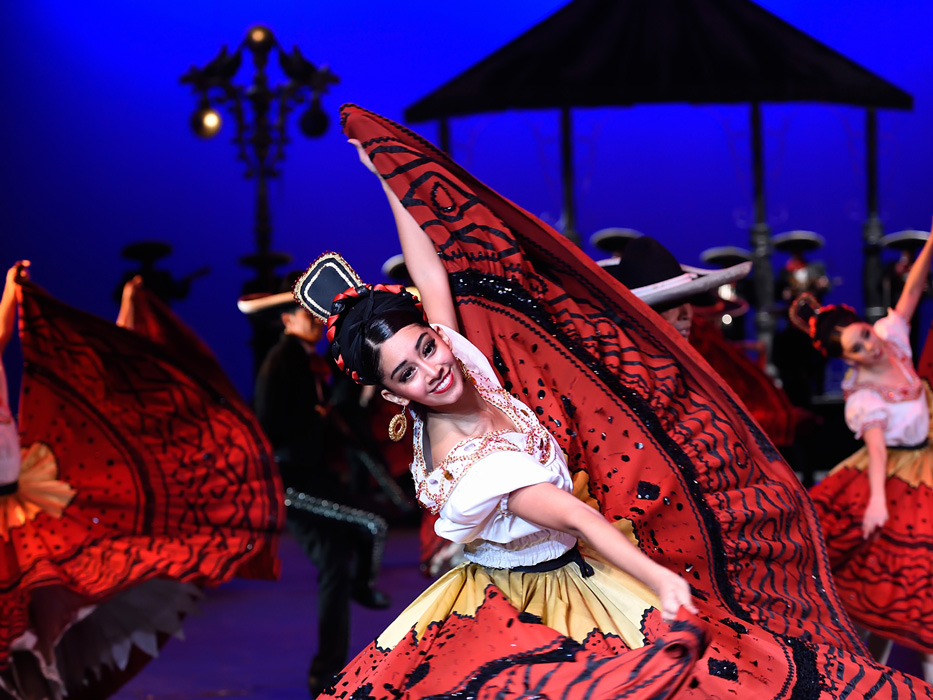 For more than 60 years, Ballet Folklórico de México has introduced audiences to the incredibly rich and varied forms of Mexican dance with a theatricality worthy of Busby Berkeley.

On Nov. 3, Ballet Folklórico de México will make its third appearance on the Harriman-Jewell Series, filling the Kauffman Center’s Helzberg Hall with its exuberant live music, dance and spectacular costumes.

Ballet Folklórico de México was founded by Amalia Hernández in 1952. What began as a group of eight performers became an ensemble of 52 within 10 years. Since its founding, it has toured more than 80 countries, as well as the United States, making two stops in Kansas City on the Harriman-Jewell Series in 1997 and 2012.

“The music started and the lights went on,” Tetuan said. “A single young lady flew from one side of the stage with so much energy you could feel the wind from the movement of her skirt. The color was a glimmering aqua blue with red ribbon trim on the bottom. Soon there were two other girls with a couple of varieties of colored skirts with the same glimmering look, and then there were three other dancers who joined them with the music playing. All of their ballet dance movements were done with beautiful smiles.”

Tetuan says that the breathtaking performance was an inspiration.

“There must’ve been 12 guys who came out to the stage dancing with handkerchiefs or paliacates,” Tetuan said. “After the dancers finished, I was hooked. I was already involved with the folklorico arts, but it was then that I looked at it from a different perspective and wanted to start my own dance group, like my Maestro, Ediberto Gonzalez, from Ballet Folklorico de Topeka.”

The Harriman-Jewell Series has arranged a folkloric dance master class on Saturday, Nov. 3, at 11 a.m. led by members of Ballet Folklórico de México. Tetuan’s Grupo Folklorico del Sol is taking part, along with other area folkloric dance groups. The master class is free and will take place at the Guadalupe Centers, 1015 Avenida Cesar E Chavez. There is no charge for the master class.

Yannick Nézet-Séguin, who was in Kansas City to conduct The Philadelphia Orchestra in September for the Harriman-Jewell Series, is returning Dec. 13 . . . and he’s not coming alone. Nézet-Séguin will perform as pianist in recital with none other than mezzo-soprano Joyce DiDonato, when she performs Franz Schubert’s masterpiece of German lieder “Winterreise.”

DiDonato, an international superstar and Prairie Village native, is especially beloved in Kansas City. Her many appearances on the Harriman-Jewell Series have been emotional love-fests, and her December recital at the Folly Theater, with another charismatic musician at the piano, promises to be an evening to remember.

Nézet-Séguin, one of the greatest conductors of his generation, has a special feeling for opera. In February, he became music director for New York’s Metropolitan Opera. Nézet-Séguin’s sensitivity to the human voice will make him the perfect collaborator for DiDonato in a program of what are considered the greatest art songs ever written.

Schubert’s Winterreise (Winter’s Journey) is a profound meditation on the meaning of life. It is rare to hear the entire cycle performed in concert. It is even more rare to hear it performed by artists of DiDonato and Nézet-Séguin’s caliber.