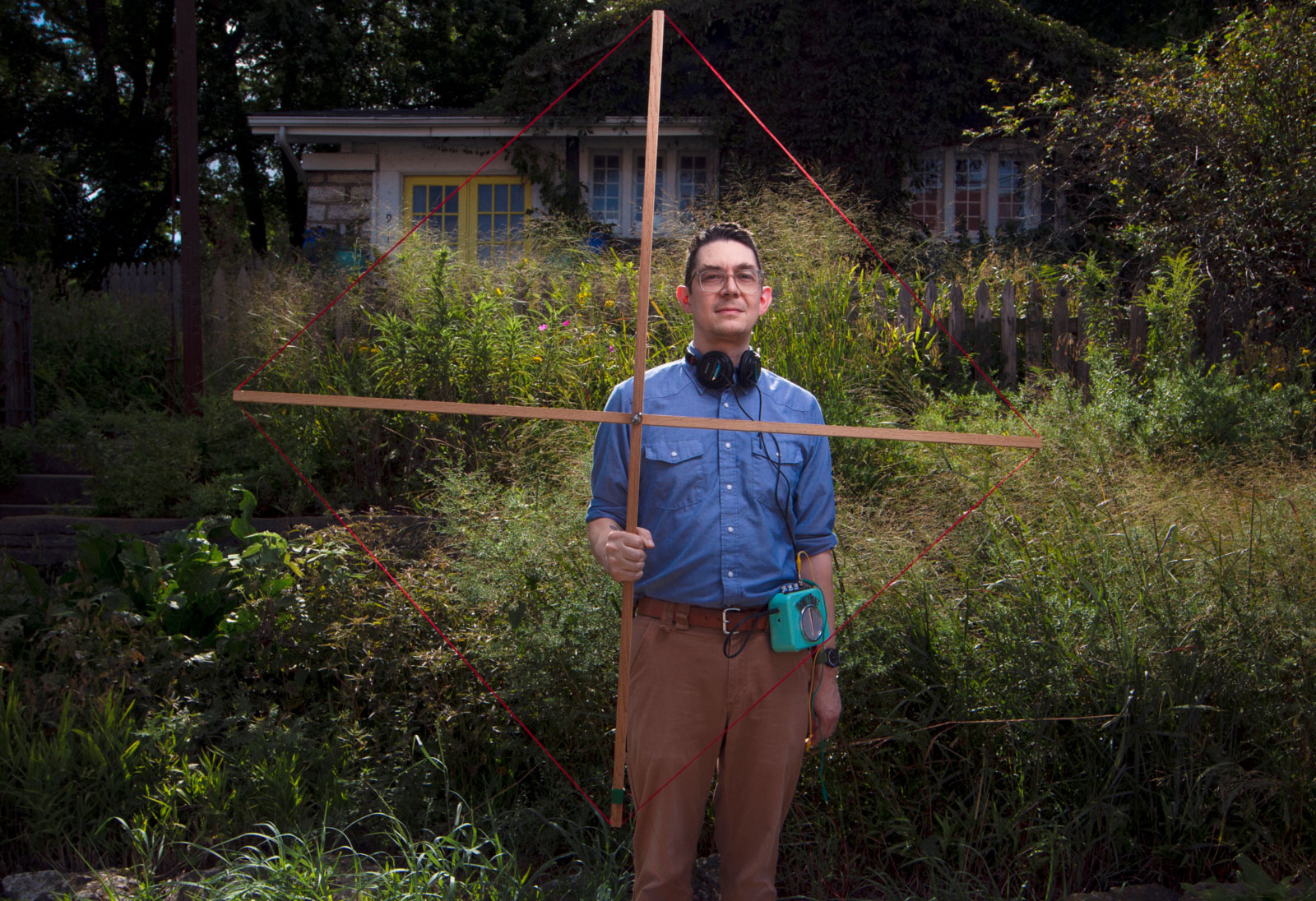 Imagination is the Medium of this KC-Based Composer, Improviser and Performer, Who Was Recently Recognized with a 2018 Charlotte Street Generative Performing Artist Award

Composer and improviser, phonographer and performer, Shawn E. Hansen works outside: outside of convention, outside of expectations, and, sometimes, literally out-of-doors, outside the realm of the traditional concert stage or studio.

Hansen received a 2018 Charlotte Street Generative Performing Artist Award. His work goes beyond formal composition practices into the realm of conceptual art. Though he performs most often on analog electronic instruments, imagination is his medium.

He grew up in Prairie Village, Kansas. That’s where he created his longest-running performance piece, KJEA-radio, an imaginary radio station he started when he was six years old.

KJEA-radio, at first, was purely conceptual, and then tangible, with Hansen making mix tapes (or misc. tapes, as his family called them) with recorded skits, fake talk shows and interviews, and deejaying records. “It moved into this kind of imaginary realm, or it stayed there, and functioned, as an adult, as another layer,” he said.

KJEA-radio has traveled with him, so to speak, throughout his career; in graduate school, he turned it into a real radio station.

Hansen graduated from the University of Northern Colorado with degrees in theory and composition but decided to break out of the strict academic music path. He pursued a Master of Fine Arts at the Milton Avery Graduate School of Fine Arts at Bard College, where he studied with some of his heroes.

“Getting that kind of education seemed more relevant to my interests that were, at that time, becoming more conceptual and less typical composition,” said Hansen. “I had stopped writing conventionally notated compositions, just using a shorthand instead and getting into improvised music, so it seemed like a place where I could successfully make work in the style that I wanted and get the right feedback, not just be an outsider.”

While at Bard, Hansen explored the concept of thought structures, as described by Francis Yeats, who researched the mnemonic devices devised by Greek orators. “It was interesting to think about a structure where I could house all human knowledge and then . . . build an extra wing on that. What would be in that wing?”

That extra wing became Sycamore House, a conceptual “safe space for creating things that might be economically unfeasible or physically impossible, or dangerous for one reason or another, either physically or emotionally.”

He continues that practice. “A thought structure is something to inhabit when you make a choice. . . this has been a way for me to translate the way I think about improvisation personally to other collaborations.”

Hansen reconstituted Sycamore House in Kansas City as a music series, partnering with Charlotte Street Foundation to create a venue for touring improvisers, doing four concerts a year for about five years.

Hansen returned to Kansas City ten years ago, establishing his career as a piano technician and developing his artistic output.

He moved back, in part, for family, but it was also strategic, considering Kansas City’s low cost of living compared to that of other major metropolitan areas. “I’ve lived in these places in different parts of the country, but I didn’t travel very much.”

He decided to flip that and now he travels regularly to Philadelphia, New York and Los Angeles to meet with collaborators and work on projects, both solo and collaborative. He’s toured in Europe and hopes to visit even more exotic locations, like Patagonia.

To these locations, and the more mundane ones, he takes his Sonic Field Journal, a portable, battery-operated set of electronic instruments, to create his Field Recordings, a practice he described as “hunting sounds.”

“I’ve been trying to make music outside of the conventional music form of the score or a recording studio,” he said.

Whether the field is in nature, at a bus stop or library, Hansen records the environmental sounds directly, so as to not disturb the sonic landscape, and at the same time improvises in accord with or response to those stimuli.

His first album from these field recordings is “Radio Badlands,” released this summer on cassette by Norwegian outlet TIEP.

It was also at Bard where he was encouraged to take KJEA-radio from concept to reality.

“I made my first transmitter in 2001, and started using that in specific music projects, but I also have that just streaming all the time at home, so there is this few block radius pirate radio station that I curate the music for. It’s been running for years now as an actual radio station with music on it.”

Along with electronic instruments, he also plays saxophone, piano and organ, though he doesn’t perform as much on those instruments.

He’s worked on his latest, somewhat more conventionally notated composition, since 2002. Somewhat less conventionally, it’s written on a scroll, is currently 30 feet long and continues to grow. “I’ve slowed down the improvising process so slowly that I can write it down while I play, so every note or chord has to fully decay before playing the next.”

Last year, he performed a portion of the work at the Kemper Museum of Contemporary Art inside sculptor Rashid Johnson’s installation “Antoine’s Organ,” the room-sized structure of steel beams filled with plants, books, lights, television monitors and a piano.

Involving improvising, experimenting and composing at the piano, the three-hour performance represented about a fifth of the overall work as it currently exists.

“That space in between the end of the decay on the instrument and the threshold of hearing is really interesting to me,” said Hansen.

Though much of his catalog is experimental solo work, his years of improvisation encourage collaboration.

“I have so many project ideas that they often need some outside influence to spark and continue. Working, if you just choose a single project and try to force it to happen, can be unsatisfying, and that’s why collaboration is great at some level, where you get either the excitement or the thought process of someone else involved, which can really propel a project forward.”

Hansen’s work demonstrates his experiences as listener, maker and thinker. A curated selection of his work is available on both Soundcloud (as KJEA-radio) and Bandcamp (as Shawn Edward Hansen), providing remarkable access to his explorations of thought and process, space and reality, phenomenon and deliberation, response and chaos, imagination and possibility.

Above: Shawn Hansen with his “very low frequency” radio antenna, which can listen to sounds of the earth’s electromagnetic shield. He appears in front of his Rosedale home, landscaped with native perennials by Barbara McReery. (photo by Jim Barcus)