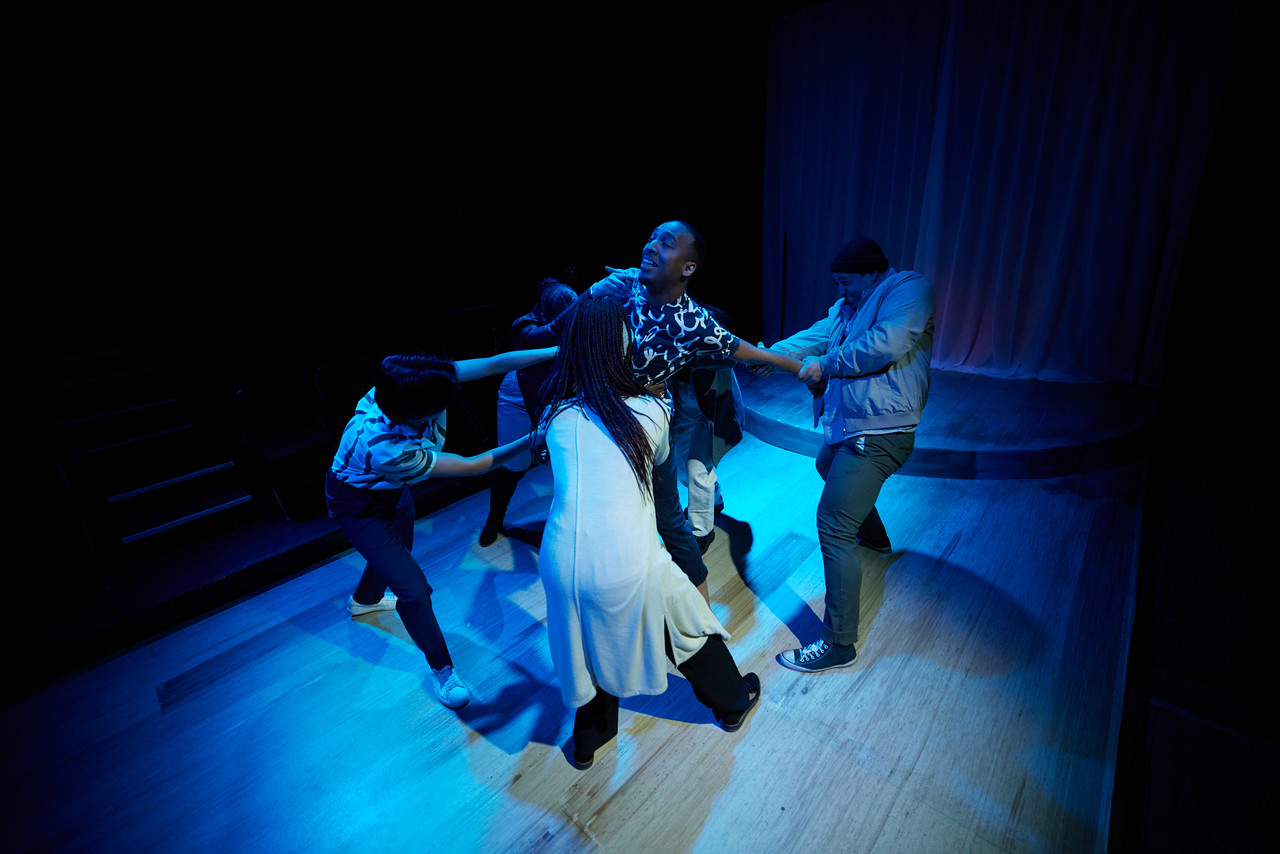 Vaughan Harrison and the cast of “Spilled Milk” (Brian Paulette)

We seem to be in the midst of a fascinating era of theater, where new plays that found success in competitions and festivals in and leading up to the early months of 2020 are finally now getting their first mountings outside of those settings. It’s a story I’ve been hearing more often from plays premiering in Kansas City. And while it can be difficult to think about silver linings to the events of the last few years, we do seem to find ourselves on the receiving end of a windfall of immensely creative new works that have been sitting on the shelf for that whole time. As far as silver linings go, it doesn’t feel insignificant.

“Spilled Milk” premiered at the New York Theatre Festival’s Winterfest in February of 2020. It was named a finalist for Best Play and “two days later, the world shut down,” as writer/director Khalíf J. Gillett tells it. It’s tragic that such a boundlessly original play was forced into hibernation for so long, but we are luckier for it, as the production has now found a home at Fishtank Theatre, giving us access to this beautiful piece of art.

Gillett’s “Spilled Milk” is a self-described “choreopoem”—a combination of poetry, movement, and more straightforward prose—centered on Bobbie (Vaughan Harrison), a college soon-to-be-senior who recently died by suicide. The story primarily focuses on Bobbie’s friends the day of his funeral, also dipping into flashback, as well as letting us hear from Bobbie as he addresses the audience directly as a post-mortem narrator. Sitting on a throne in the form of a large metal patio on a platform raised above the stage, watching the action and scribbling in a notebook, Bobbie’s constant presence is both a comfort in this time of mourning, while also making us wonder if this is a story he’s remembering or if it’s one he’s writing as we go.

Despite its fantastical premise (or perhaps because of it), Gillett’s script feels striking in its realism—rooted in an incredible chemistry between Vaughan and the actors playing his friends (Chelsea Turner, Jerry Mañan, Lauren Moore, Un Joo Christopher) and his step-brother (scene-stealer Bùi Ngọc Hiếu). These grounded relationships serve as a launching pad for the breaks into the more fantastical elements, as these characters’ inner struggles are beautifully represented through emotionally evocative gesture work led by movement director Jenise Cook.

Gillett takes on heavy subject matter in this play and the work not just survives but thrives by choosing not to try to offer anything in the way of answers. We are better off not going in expecting any sort of reason for why Bobbie has killed himself. What we are offered is simply a sort of meditation on these characters’ lives and relationships, which are presented without judgment.

The lack of judgment here is actually pretty remarkable, and helps ground the characters in that realism. Gillett finds some humor here, especially in exploring Bobbie’s passion for poetry. It’s how he’s able to break through his extreme depression and express himself, but he is also a 21-ish-year-old college student still developing his voice and some of his poetry is bad. Gillett allows us to see the importance and depth of Bobbie’s art while also letting us revel in the relatable pain of a bad open mic night.

More seriously, though, characters’ feelings on suicide, therapy, mental illness (and a strongly outspoken preference for self-medication) are presented in the way humans present these things: as their own flawed opinions. Whatever reaction I or any other member of the audience have to them is our own, and I never got the feeling Gillett was explicitly condoning or condemning any single character. It is genuinely difficult to convey neutrality in art but when done well, it serves as an incredible tool to make the audience reflect on their own thoughts, opinions, and biases. Gillett succeeds here, sometimes all too well.