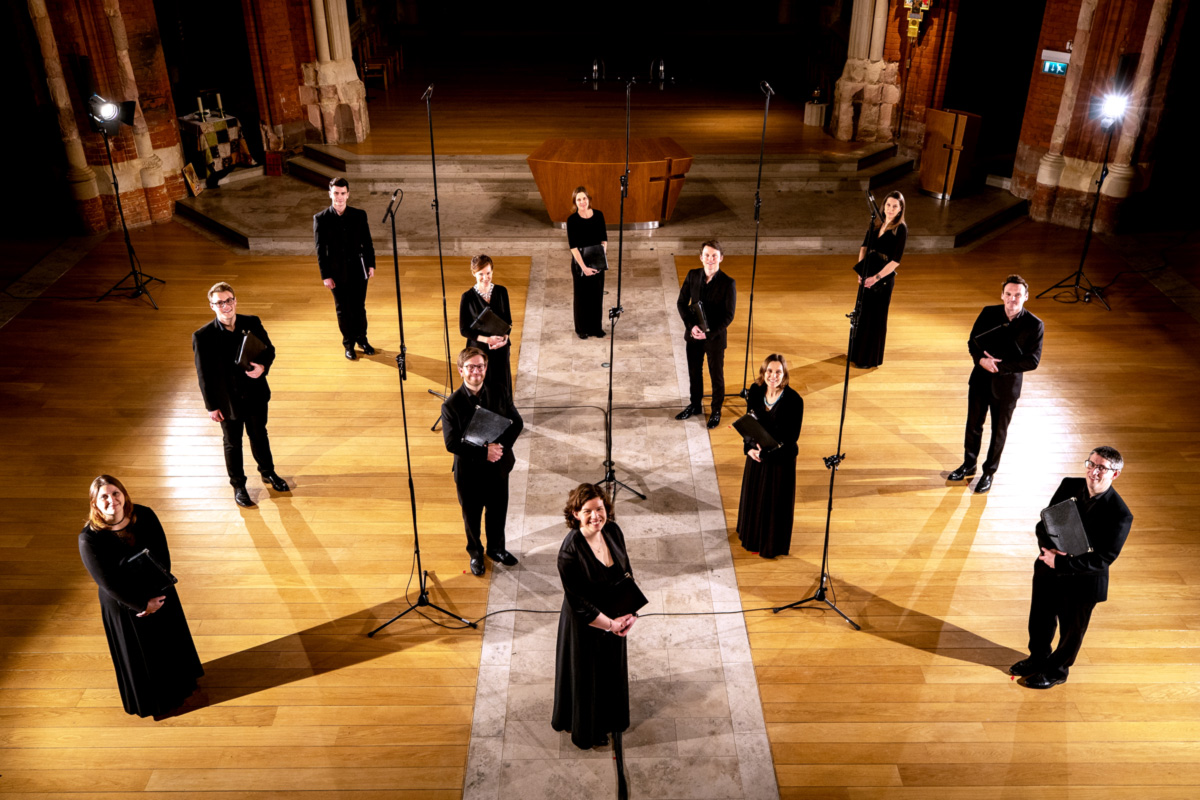 The music of Stile Antico (above) alternates with performances by the Kansas City Chorale (opposite page) in a Friends of Chamber Music concert Dec. 9 at the Folly Theater. (Musicarta Media)

When British-based vocal ensemble Stile Antico had to cancel their U.S. tour — for the second time — it was a big disappointment for local fans of their unique choral sound and thoughtful, unexpected programming.

Friends of Chamber Music has presented Stile Antico [STEE-lay ahn-TEE-co] before, featuring the beautiful polyphony of the Renaissance. Leia Barrett, Friends’ acting executive director, thought there might be a way to still share Stile’s holiday program.

“They are a really brilliant group, who are very innovative, and I didn’t want to cancel the concert entirely,” she said. “I knew from experience that they had done absolutely gorgeous video recordings.” Last season, Friends presented Stile’s “The Journey of the Mayflower,” which Barrett described as “top notch.”

Stile Antico’s touring program this season is “Lessons and Carols: A Victorian Christmas Tradition.” While many holiday offerings are all brash, bright colors and flashing lights, this program is more meditative and reflective. In keeping with the English practice of the Service of the Nine Lessons and Carols (which started in 1880, with scripture interlaced with traditional anthems and carols, typically performed on Christmas Eve), the program combines 16th- and 17th-century choral works with selections from 17th-century metaphysical poets.

Barrett approached the group about commissioning a portion of their program, filmed, and partnering with a local group to perform the other selections live. She then reached out to the Grammy Award-winning Kansas City Chorale, who were able to fit in the program during their already busy holiday season.

This hybrid concert is “A Renaissance Christmas.” An added benefit, said Barrett, is the opportunity to hear two different choral styles side by side. “Hearing an American choir and a British choir will be an interesting juxtaposition that we don’t really hear very often.”

With the two choirs alternating works, the concert runs about 75-80 minutes, with no intermission, at 7:30 p.m. Dec. 9 at the Folly Theater.

The program includes Renaissance-era works, primarily in Latin, from familiar names such as William Byrd, Michael Praetorius, and Josquin des Prez, along with Hans Leo Hassler, Francisco Guerrero and more.

Along with the music, an equally essential part of the program is the poetry. Barrett approached veteran Kansas City theater actor Robert Gibby Brand about performing the readings after seeing him do a similar type of role over the summer. “He just took over the stage. He had this incredible presence and gravitas,” she said.

What she didn’t know at the time was that Brand had studied these poets in college and was not only knowledgeable but a great admirer of these writers, whom he found fascinating.

“It’s a really interesting and intriguing program,” said Brand, brimming with enthusiasm. These metaphysical poets — labeled so in the 18th century — used “exceptional outré images,” he said, drawing from alchemy, astronomy and astrology, and their works continue to resonate today.

Most of these poets were clergymen in the time of William Shakespeare, though two of the selections come from women (Emilia Lanier and Mary Sidney Herbert, Countess of Pembroke), not common in an era when most people were illiterate and education for women was rare. Not only were these poets contemporaries, but they were “closely connected,” said Brand, friends and supporters of each other’s works, sharing “intellectual stimulus.”

Their writing most often explored their views of faith. “The whole idea of salvation was so real to them,” he said. England, by that time, had been embroiled in religious wars for decades, Protestants versus Catholics, and that tension can be found in the writing, too, not a far cry from the political and social tensions we feel today.

There is also “wit and humor” in some of the poems, said Brand. “Not falling down laughing, but the ability to see the contradictions, the surprises, putting unexpected elements in juxtaposition.”

Along with names still familiar today, like John Donne and George Herbert, the selections include Henry Vaughan, Lancelot Andrewes and Robert Southwell, a Jesuit who practiced in secret, but was eventually found out and executed.

It is this variety and thoughtfulness that allows the audience to consider the different emotional journeys people travel in their quest for salvation in any of its forms, in their service of faith, especially during the holiday season of the present, when so much is distorted through consumerism and manic displays of cheer.

“I think it’s such an original choice of music and poetry,” said Brand. “I am thrilled that I’ve been asked to do this, and I think it’s an awful lot of fun. And I’m thrilled that the Chorale is doing it, because I think they are our great jewel, and I love sharing the stage with Charles (Bruffy).”

Additionally, Friends invited musicology professor Bill Everett to share insights about the era, the music, and the program for their “Chamber Music Now” video series. The 30-minute talk will stream free on the Friends’ YouTube channel.

“It felt like this perfect merging of community groups while also providing the audience with beautiful programming by Stile,” said Barrett. “It’s going to be a really stunning program.”

Friends of Chamber Music presents “A Renaissance Christmas” at 7:30 p.m. Dec. 9, at the Folly Theater. For tickets and more information, www.chambermusic.org.