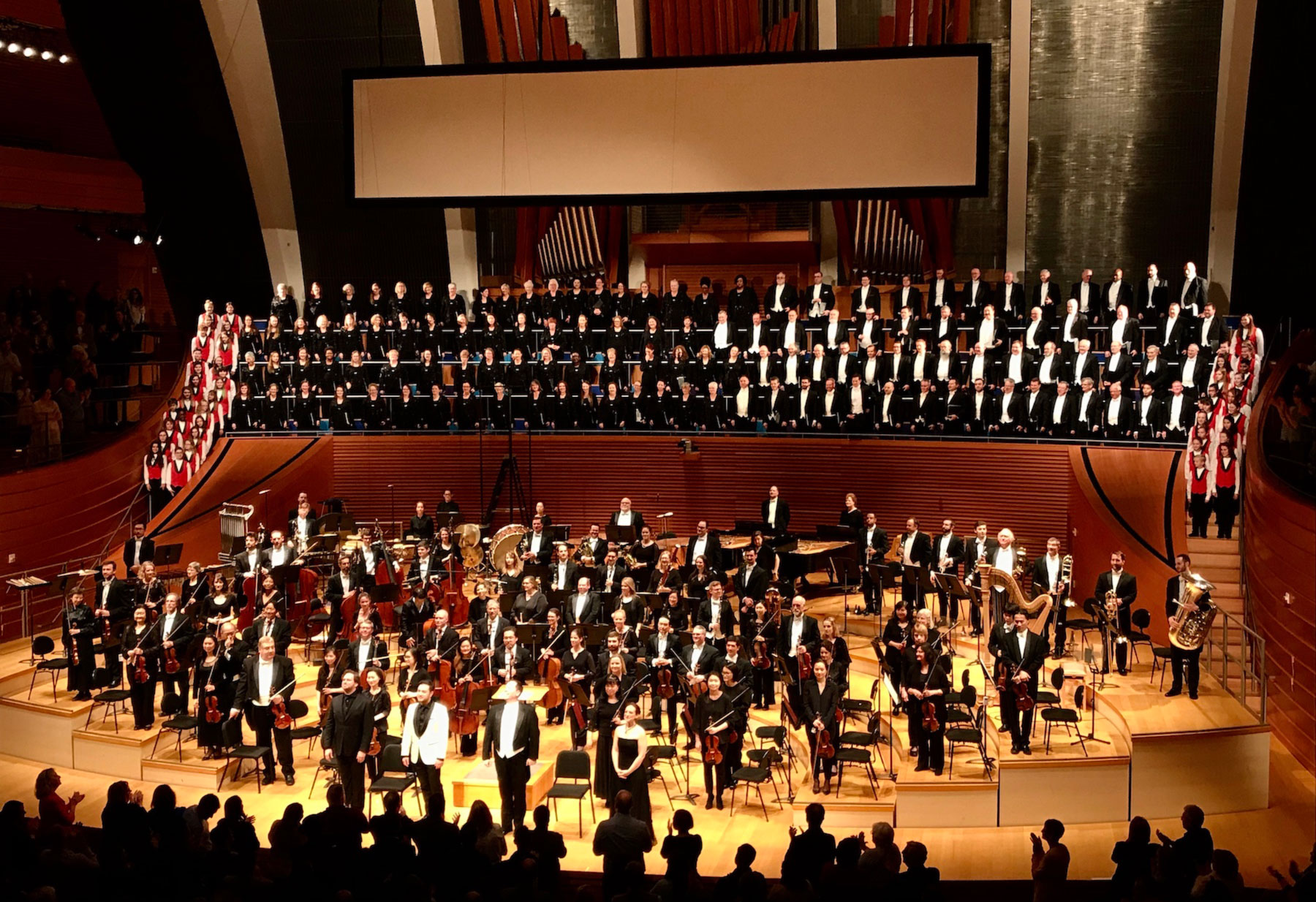 Who knew that the ancient cycles of life and death, grief and hope, dawn and dark could be so much fun? The Kansas City Symphony gave a spectacular concert Thursday night, performing modern pieces with a sense of timelessness.

Guest conductor Ryan McAdams made his Helzberg Hall debut with a program that engaged a prismatic palette, connecting the human experience through mythological, Medieval and modern sources.

The cornerstone of the concert was Carl Orff’s “Carmina Burana,” written in the 1930s. McAdams paired that well know work with two startling, clear-sighted pieces by living composers, written within the last five years.

This was not McAdams’ first time in front of the Kansas City Symphony, though. His international career has allowed stops in town for recent performances of “Madama Butterfly” and “La nozze di Figaro” with the Lyric Opera of Kansas City.

From the podium, McAdams opened the concert with comments about the pieces, how they worked together (this idea of cycles, renewal, of pain and healing) and what was essential to know regarding the background of each piece (pains and joys of humanity, experience of trauma and survival, nature’s endurance).

McAdams apologized, first off, for the lack of dragons, referring to a preview article that glossed the cantata as classical music’s “Game of Thrones.”

“We went with our first choice: the brass section,” McAdams joked, “though they’re much more difficult to feed.”

This earnest and amusing welcome set up an earnest and evocative performance. From the chatter throughout the concert and anecdotal observation, I estimated that this was a new, or at least rare, experience for a fair percentage of the audience, but that reinforced my appreciation of the program. Not only did we hear a fine rendition of a 20thcentury monument, but also captivating and cohesive works from the 21stcentury (instead of your typical orchestral workhorses).

The first was Sarah Kirkland Snider’s “Something for the Dark.” Bold at first, the work built fragile, shifting waves with the intricacy, strength and delicacy of a spider’s web. Flourishes emerged from inner voices, creating shimmering cascades of transmuted energy.

A single tone of golden silk from concertmaster Sunho Kim brought this energy to a reflective grounding point, McAdams shaping these final moments with the gentle, yet sudden, dissolution of dappled shadows.

McAdams conducting was bold as he led the orchestra with clear affection and detailed enthusiasm. He worked the orchestra like a living thing, his movement direct and energized.

The orchestra had a trickier time with Augusta Read Thomas’ “EOS (Goddess of the Dawn),” a ballet for orchestra. The rhythmic complexity, quick emotional changes and exposed moments generated a sense of hesitancy from the ensemble, but the experience of this piece is what live performances are for, with a rich interplay of the voices and the shimmering, combative harmonies.

However, within the piece, there were some impressive individual moments, especially from the winds, like the bass clarinet and bassoon during “V: Spring Rain” and the formidable percussion part.

I appreciated that McAdams had the title for each movement put up on the supertitle screen, since the piece flowed one section into the next, though it would have been helpful to have Thomas’ narrative description included in the program notes, too.

Then we came to the headlined. Orff’s legacy sits firmly on two pillars: “Carmina Burana” and the method of classroom music education he developed with Gunild Keetman, which teachers use in elementary schools all over the world. It’s hard to say which, in the end, makes the biggest cultural impact, but this performance was a persuasive case for the former.

As exciting as the work is, the orchestra translated that energy into their details for a finely honed performance, instead of just a forceful one, crafting a fully realized ensemble sound, joined by the Kansas City Symphony Chorus, prepared by Charles Bruffy, and Lawrence Children’s Choir, prepared by Carolyn Welch.

Balanced and well articulated, the opening statement rattled the rafters. The chorus gave a fine performance, too, offering nuanced phrasing and an emotive delivery. Some entrances needed a jumpstart to really get grooving, especially keeping the intensity of the soft, fast moments, but overall the movements were exceptionally delivered.

Zetlan has a lovely, effortless delivery, as a coy, curious maiden.  Phan, who appeared in a white tuxedo jacket for his solo as the roasted swan, gave a rendition that was both tortured and comic, the orchestra underneath nearly purring in hungry anticipation.

But it’s the baritone role that gets the meat and Russell ate it up, stealing the show with the sly, semi-wittiness of the more-than-slightly drunk during the tavern scene and delicious control of his vocal range during the Court of Love.

With the lyrics in the program and projected as supertitles, it was easy to follow along. Lighting also helped insinuate emotional shifts and scene changes.

Congratulations are abundantly appropriate, not only for this riveting performance, but for McAdams’ newest and more commanding role: he recently became a father. With now even more responsibilities, I hope he keeps Kansas City on his roster and comes back again soon.