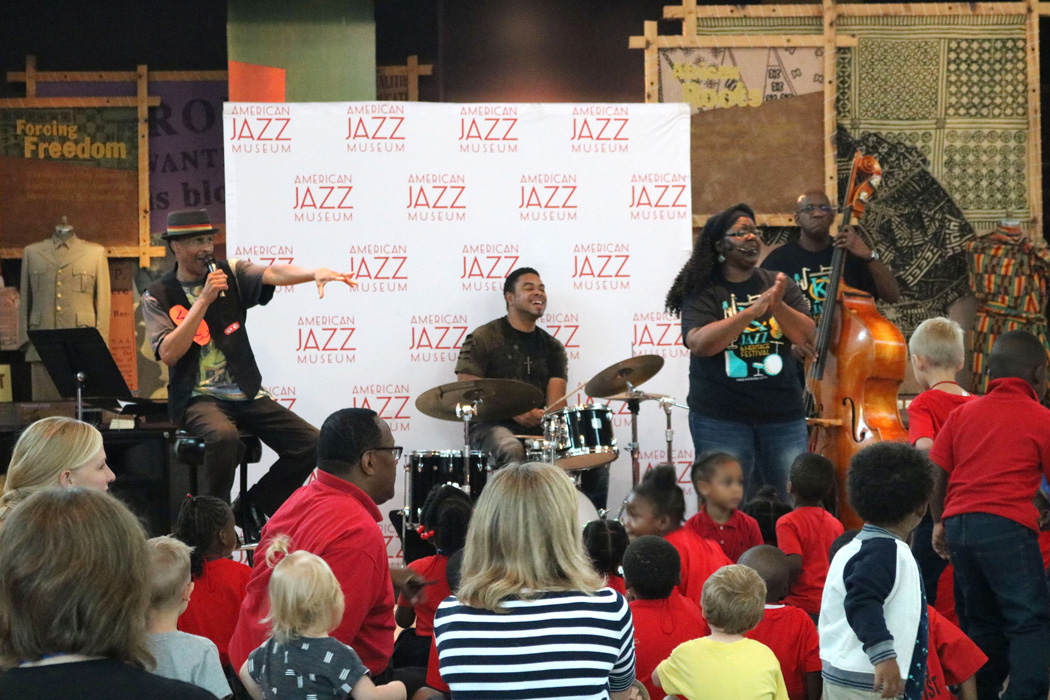 We sat down with drummer and KC native Mike Warren for a conversation about his connection to the jazz culture, the American Jazz Museum and Jazz Storytelling, one of AJM’s educational programs for children.

Growing up, were you aware of Kansas City’s place in the history of jazz?

Yes and no. I wasn’t entirely aware of the scope as a child. Once I was older and I started meeting people that were in jazz they would say, “You’ve got to come down to 18th & Vine.” So that’s how I was introduced to the history.

Back then, the way that jazz was handed down was very traditional. There were still all of the old cats that were still alive like Jay McShann, Luqman Hamza and Ahmad Alaadeen, who gravitated towards young musicians like me. That’s the way music and traditions have been handed down for generations.

Now that I’m considered an “older” musician, it’s my job to teach younger musicians what the history is and why we do things a certain way. It’s about the tradition; we have to be cultural ambassadors.

Throughout your career, how has the “jazz scene” changed in KC?

I would say it’s thrived, but it’s different. It’s been the musicians doubling down with their determination to push this music forward, make it relevant, while still trying to maintain the history.

We constantly have to appeal to new audiences. In order to build an audience you have to appreciate the music, and to appreciate it, you need to have been exposed to it. The educational system doesn’t have to necessarily produce a bunch of great artists, but it does instill music appreciation. People can relate and say, “I used to play the horn when I was in high school.” Those are the people that then become your audience.

Tell me about the first time you came to the American Jazz Museum.

I was there on day one. I can still remember the inaugural concert and thinking, “Somebody is actually creating a space where our stories can be told. There’s a place where we can still present the art form as it is today and pay homage to the past.”

At that time, it was the only place in America where you could do that. It was the only jazz museum in the country and that was something to be proud of. If you wanted to be at the cutting edge of all of the music and jazz in Kansas City, you had to go to the Blue Room.

What makes the Blue Room special to musicians?

The Blue Room is all about the art, period. It’s about the musicians. All of the people come, they’re there to listen and they’re paying attention. As a musician and an artist, why wouldn’t you prefer that?

Was music education a natural fit in your career or were you specifically inspired to become an educator?

Music education is something I never imagined I would be doing. The fact that I’m an educator is because of people like Bobby Watson and Jim Mair recognizing that what I had could be of value to younger musicians. They said, “You can’t get that good and not give back.” I have to say that I love it now because it gives me a chance to do what I’ve always done, which is mentor musicians.

Back when Jazz Storytelling started, there was little music, and even less jazz education, in schools. We thought we could introduce this music to kids and babies, make it fun and interesting, and that’s going to make them lifelong jazz supporters.

We have fun, and educate them at the same time. That’s the thing that I love about Jazz Storytelling. I get to play and be silly, and kids have no filter so they just run up to you and hug you. It’s really fulfilling.

This article has been shortened to meet word count limitations. For the full length interview, visit AmericanJazzMuseum.org/newsroom