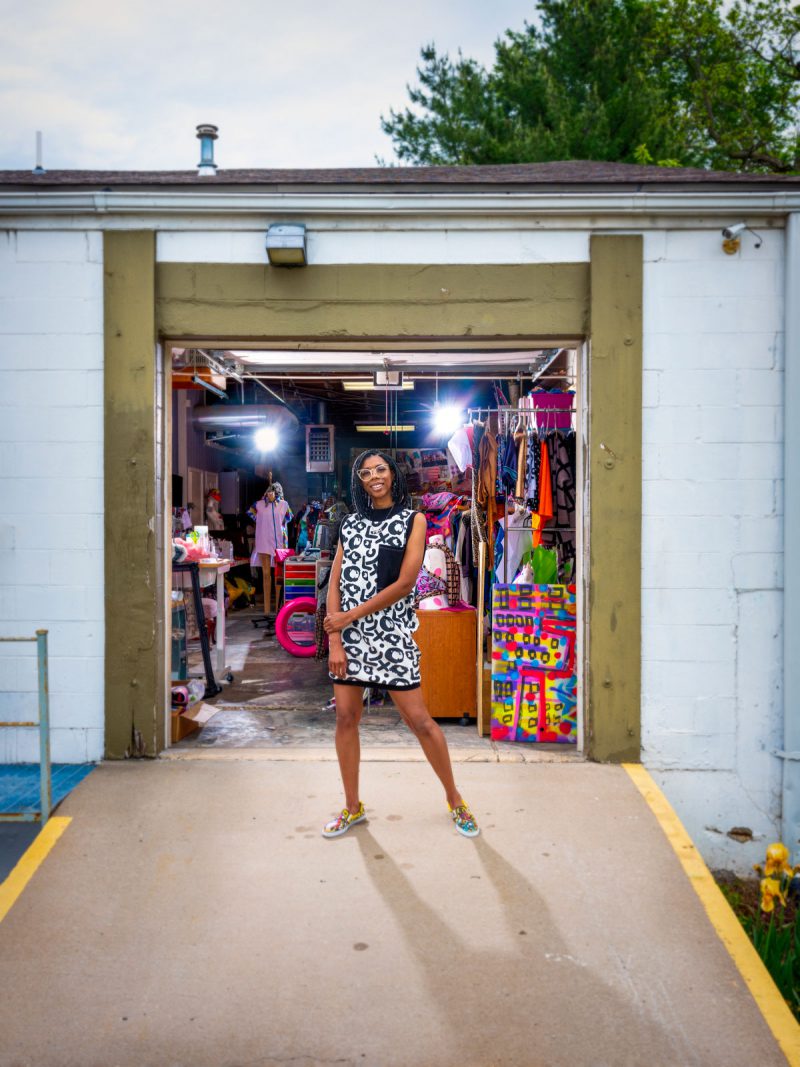 Whitney Manney outside her studio, which she shares with a church near Penn Valley Park (photo by Jim Barcus)

Whitney Manney is on fire, a remarkable whirling dervish of activity and production.

Manney, a 2012 graduate of Kansas City Art Institute, is a Kansas City-based fashion and textile designer. Since the art institute does not offer degrees in fashion, she opted to major in their top-rated fibers program, taking a deep dive into studying all aspects of textile creation and manipulation. Even before starting college, she knew she wanted to be an entrepreneur. Internships, extra reading and seminars helped school her in starting and owning one’s own business. By the time she graduated, her designs were being sold at two local retailers. By 2014, she had established her own business, “Whitney Manney,” and just four years later she was able to devote herself to it full-time.

Manney has had many honors; she won first place in Art Westport in 2017 and was also one of 20 top winners of the JOANN Fabrics Minority Creative Grant. In April she was featured in the Nerman Museum Virtual Visiting Artist Presentation, discussing her designs and working methods. She also recently acted as wardrobe designer for a Wendy’s commercial, providing five uniform tops in two days. The PBS series “My World Too” featured Manney on the fifth episode as they highlighted makers and creators recycling materials in fashion design and other fields.

Manney had asked for a sewing machine when she was 13 and likes to joke that Barbie was her first client. But she was also motivated to learn how to sew to counteract rapidly outgrowing her own clothes. She figured if she could alter them, they wouldn’t become hand-me-downs so quickly.

“My work is inspired by the aesthetics of street art and cultural movements that have shaped our urban landscape.”

The Kansas City native briefly moved to Phoenix with her family, attending a performing/visual arts high school while there. She returned to Kansas City to study at the art institute and decided to remain in what she refers to as a “cool city” after graduation. While many fashion businesses are located on either the East or West coasts, Manney explained, “I get asked a lot about why I haven’t left KC, but it really just makes sense for me to be based here. I’m able to take bigger chances with my work, have a full studio, invest my resources into more things. I’m not too sure I would be able to do that on one of the coasts.” She has never felt as if her growth has been restricted by being in Kansas City. “My thought process is that everyone is an email away. I ship packages all over, and if I’m in a show somewhere else or have been hired for a gig, I can always jump on a plane.”

Manney discusses various influences, saying, “My work is inspired by the aesthetics of street art and cultural movements that have shaped our urban landscape.” Designers with whom she feels the most affinity are Betsy Johnson, Donatella Versace and Kimora Lee Simmons.

The three main elements of her work are color, pattern and texture. She uses a mix of fabrics that she has purchased or created; she paints the designs before they are digitally printed. The photo with this story shows Manney wearing a dress she made in 2021. First, she doodled with acrylic paint, then reinvented it as a repeating motif to be digitally printed on cotton jersey.

She describes her customer base as largely 25- to 45-year-olds, with 25 to 36 the most active segment. She feels that being able to offer clients separate pieces is a great way for them to add some excitement or color into their existing wardrobe. While she loves making jackets, she feels less enthused about structured clothing.

Manney is an extremely savvy user of social media, and her self-designed website is impressive. Her Instagram account documents among other things her work, clothes, puppy, music playlists and a favorite hobby of roller-skating. Undaunted by so many social media commitments, she also decided to start a newsletter in case Instagram ever crashed.

In 2021, she joined forces with the collective The City Girl Farm to create a collection of nine chicken footstools, which Manney described as her favorite collaboration to date. Using fabrics she designed as well as felted and marled wool, Manney named the chickens after members of her family. “The Flock That Raised Me” was a pop-up (and sold out) exhibition at the Crossroads Hotel.

Whitney Manney is a dynamo whose energy and creativity will continue to impress us. After all, she says, “My job isn’t done until everybody in the world believes fashion is art.”