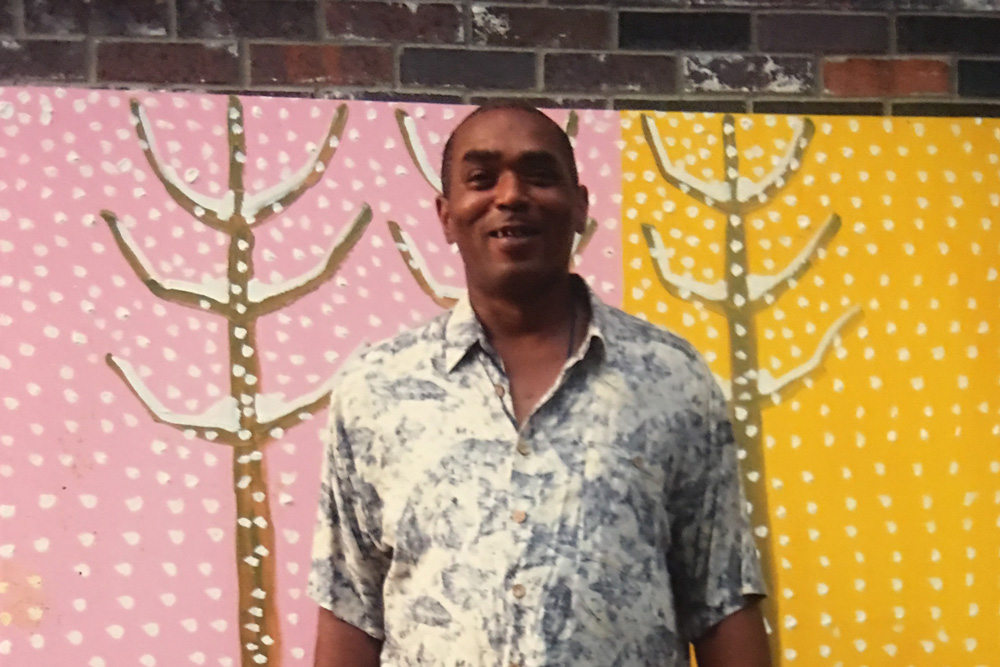 When Russell Easterwood — one of the brightest lights of the Kansas City artworld — died in April, the rainbow lost a little bit of its light. A sublime colorist, Easterwood, a self-taught artist, created large paintings, drawings and notecards with his trademark idiosyncratic imagery in a palette Matisse would envy. Frequent motifs included flowers — usually three, in a patterned vase with wildly striped wallpaper in the background; trees — often three, bare and sometimes with falling snow; and fruit markets with an assortment of shoppers, magically placed within a red milieu and shining yellow light beams. His Christmas cards, which he would sometimes sell along with other artworks in the Crossroads on First Fridays, were treasures of wit and good cheer.

Born and raised in Kansas City, Kansas, Easterwood graduated with an associate degree in business from Johnson County Community College and later received a real estate license. At times, he made and decorated clocks and operated a gift basket service. According to his family, in 1979, he decided to be a full-time artist.

Easterwood suffered from mental health issues and became homeless for a time, living at the City Union Mission, which he also decorated with his art. It was there that Tom Deatherage, the late director of The Late Show gallery in the East Crossroads, discovered him and his art in the mid-2000s. (The late Bob Carlson, a print dealer for years in Kansas City, had previously championed Easterwood’s work.)

Deatherage gave him a one-person exhibition at his gallery, which was covered in “The Kansas City Star,” and collectors began buying his art. Later Easterwood was represented at the Todd Weiner Gallery in the Crossroads, and his art was in exhibitions at the Nerman Museum of Contemporary Art and KU Medical Center, among other places. (This writer included him in the exhibition “Celestial Terrestrials: Between Heaven and Earth” at the Greenlease Gallery at Rockhurst University in 2011.)

Easterwood’s family notes that “he loved making trips to the Nelson Art Gallery (The Nelson-Atkins Museum of Art), with a special stop in their food court for their Reuben sandwich.” He was also a Baptist, and said his talent was a “gift from God, and to God be the praise.”

Despite Easterwood’s personal suffering, his artworks were symbols of energy, good will and hope. They were also utterly individualistic and deserve a place in any museum in the country.