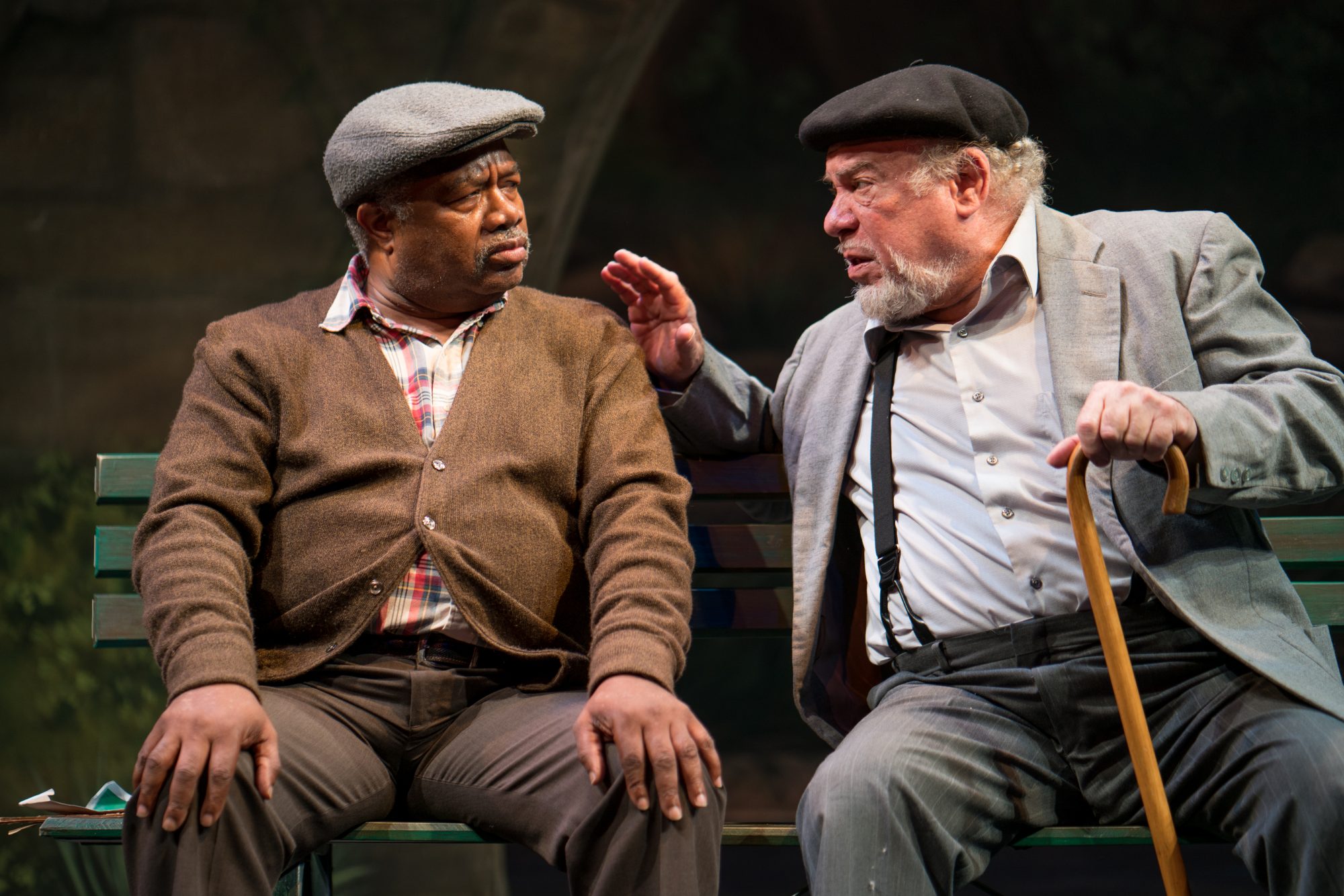 KCAT short-changes itself by opening its 12th season with a creaky play that was a Broadway hit in 1985 but feels stale. Herb Gardner’s I’m Not Rappaport ran for three years in its initial New York production and snagged a Tony Award for Best Play.

But that was then. By current standards, this two-act play about two garrulous old men who meet daily in Central Park is an unconvincing construct. Any hints of meaning get overwhelmed by a never-ending stream of one-liners, gags and — in the second act — preposterous antics.

But director Dennis D. Hennessy is a master of comic timing and he assembled a superior cast. Let the record show that many audience members in attendance Friday night responded to the director’s button-pushing with uninhibited laughter.

The spine of the story is the relationship between Nat, a Jewish one-time radical who sincerely believed in the ideals of Communism, and Midge, an African-American building superintendent losing his eyesight. Theirs is a cantankerous friendship that allows them to bond amid constant bickering. These roles are written for actors who love to ham it up, and Victor Raider-Wexler as Nat and Granvile O’Neal as Midge are happy to oblige.

Raider-Wexler is one of the city’s finest character actors and his performance, as you might expect, is a showcase of nuanced timing. Nat is given to flights of fancy and entertains himself by sharing his autobiography, the details of which can change on a dime. His problem? His adult daughter thinks it’s time for him to live a supervised life at a home for senior citizens. Midge has a different challenge: The apartment building where he works is transitioning to a co-op and the board of directors has no further use for his services. O’Neal, a veteran performer on local stages, projects the right mix of anger and anxiety and holds his own quite nicely with Raider-Wexler.

One is tempted to categorize this play as a dramatic comedy, but there’s no valid drama in sight — just ginned-up melodrama. Gardner’s play does address the plight of the elderly, and comments on old-school left-wing idealism. But Gardner never lets those themes stand in the way of his real mission: Getting laughs.

If Gardner had contented himself to write a long one-act that consisted only of Nat and Midge in conversation, he might have achieved the poignancy he clearly desired. But the clumsy plotting and reliance on thin supporting roles only distract us from the Nat-Midge friendship.

Even so, Mark Robbins delivers a polished performance as Danforth, the building resident assigned to tell Midge he’s out of a job. The luminous Amy Attaway is less a character than a presence as Laurie, a young artist who comes to the park to sketch. Brian Huther makes an sharp impression as Gilley, a young Irish thug who extorts payments from Midge in a small-time protection racket. Logan Black is menacing as Cowboy, a drug-dealer. Cheryl Weaver, who plays Nat’s daughter Clara, delivers the strongest supporting work. In a long scene in Act 2 we get a clear picture of their relationship and how it changed after Clara stopped believing in her father’s political ideals.

Raider-Wexler and O’Neal are fun to watch. But the second act becomes increasingly nonsensical as Nat and Midge decide to intercede on behalf of Laurie, a recovering drug addict who owes Cowboy money. They do so by posing as mafiosi, which is the stuff of bad farce.

Rappaport smells a bit like a commercial calculation. The show could be considered a companion piece to  KCAT’s memorable production last year of D.L. Coburn’s The Gin Game, in which Raider-Wexler and Marilyn Lynch played cantankerous residents of a home for the elderly. That production, also directed by Hennessy, was reportedly a huge hit for KCAT. Maybe the company’s leadership thought lightning might strike twice. That’s not necessarily a bad bet, but The Gin Game is by far the superior play.

Above: Granvile O’Neal, left, and Victor Raider-Wexler star in the Kansas City Actors Theatre production of I’m Not Rappaport. Photo by Brian Paulette.