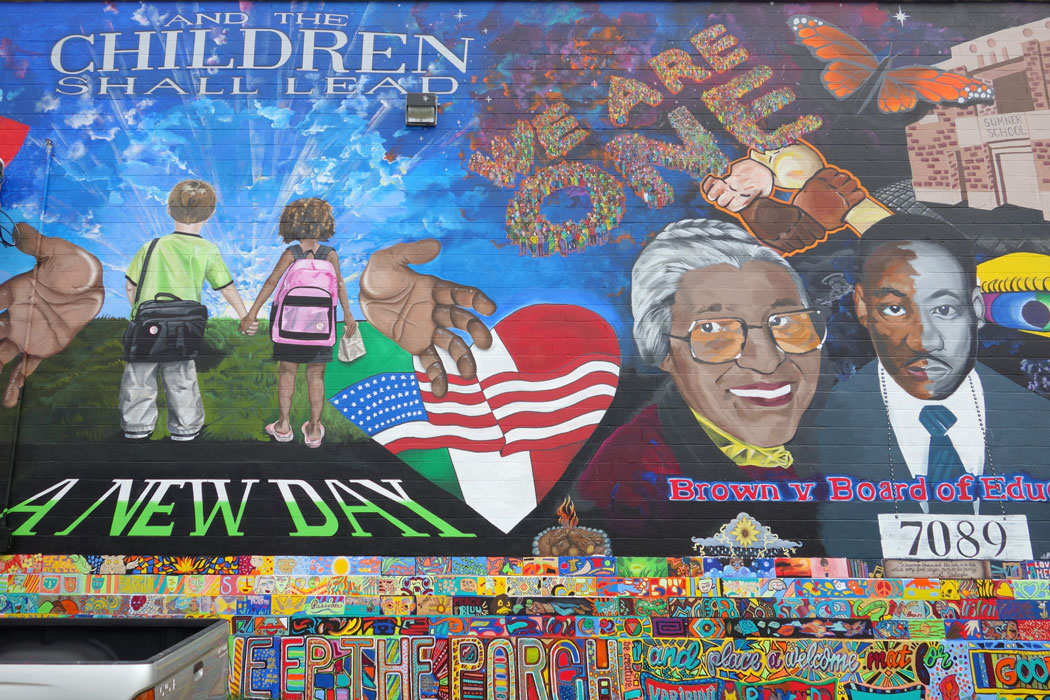 Now, a dynamic new mural across the street from the school brings a new generation’s perspective on the decision, which found that school segregation violated the 14th Amendment guaranteeing equal protection of the laws.

Its creation recalls a Renaissance-era production, with Toombs in the role of master artist, working with more than 20 professional artists from Topeka, Kansas City and Lawrence, and approximately 90 youths. Toombs and his operations manager Cathy Burchett also recruited more than 300 visitors to the Brown v. Board site to walk across the street and paint!

Toombs conceived the mural’s overall composition and its central image of a boy and girl holding hands as they walk toward the horizon between a pair of open hands and the phrases “And the children shall lead” and “A New Day.”

Other major motifs in the work include portraits of Rosa Parks, Martin Luther King Jr., Cesar Chavez, Winnie Mandela, Gandhi and Thurgood Marshall, who was an attorney for the plaintiff on the Brown v. Board case and who later served as the nation’s first African American Supreme Court Justice.

Each year, the Brown v. Board site collaborates with the Topeka-based Living the Dream, Inc. to sponsor activities honoring the legacy of Martin Luther King Jr. Art created as part of this celebration is exhibited at the Brown v. Board National Historic Site.

The idea for a youth mural was conceived by Sarah Fizell, executive director of ARTSConnect, a Topeka non-profit that has sponsored mural projects since 2013. Three years ago, when she was jurying the youth art submissions to the Living the Dream exhibition, Fizell realized the youth-made works would make a wonderful mural. She broached the idea to Joan Wilson, park ranger and VIP coordinator at the National Historical Site.

With Wilson’s encouragement, Fizell approached Larry Hill, the owner of the Hill Co. plumbing supply building across the street from the Brown v. Board site, about donating the use of a wall of his building. Hill’s family has owned the building since before the Brown v. Board decision, and with those deep roots in the neighborhood, the Hills agreed enthusiastically.

At the time, Toombs was participating in an exhibition celebrating the 60th anniversary of the Brown v. Board decision at Washburn University in Topeka’s Mulvane Art Museum. Fizell saw Toombs’ work and shared her idea about utilizing the Living the Dream art. Soon, the mural project was off and running, and after many months of fundraising, planning and outreach to community partners, the work came together.

Toombs describes the mural as a “curated collage of children’s drawings.” Drawings made by the Living the Dream youth artists and executed by more experienced artists are incorporated in the upper portion of the wall, while the youngest participants and casual visitors to the site helped paint a frieze along the lower portion. The repeating rectangle pattern in the frieze suggests quilts, as well as African textiles.

Images of refugee women appear beneath the head of the Statue of Liberty near a monarch butterfly that Toombs likened to a symbol of migration, while a large scroll in the upper left corner lists the names of participating artists.

Two images of schools appear in the mural. On the left is the Monroe Elementary School for African American students, which was at the heart of the Brown v. Board case. On the right is the Sumner Elementary School. Sumner was the school for white students where Linda Brown attempted to enroll in 1950 because it was closer to her home, part of a concerted effort organized by the Topeka chapter of the NAACP. Brown’s application, along with those of 19 other students, was rejected by the Topeka Board of Education. In 1951 the Topeka NAACP joined a national class-action lawsuit that was eventually named after Linda Brown’s father, Oliver.

Toombs’ intertwining of race and education represents a significant contribution to public art practice; indeed, the mural stands as his most important public project to date. ARTSConnect raised nearly $100,000 for the mural from corporate donors, grants and individuals, with FHLBank Topeka as the lead funder.

As Toombs points out, “The biggest demographic in Topeka is Caucasian. Most of the images made by the Living the Dream youth artists were made by white kids.”

From his perspective, the beauty and profundity of the Living the Dream submissions indicate that today’s white students consider the civil rights successes of the past to be part of their heritage too, and not just the heritage of people of color.

Toombs’ goal with the mural — “to create opportunities for lots of people to make art, not just a single guy” — is similarly inclusive. His artistic selflessness raises the bar for how to execute a community-based public art project.

On August 6, the mural made “The New York Times,” when a picture of it was reproduced with Ron Stodghill’s story, “On a Civil Rights Trail, Essential Sites and Incredible Detours.”