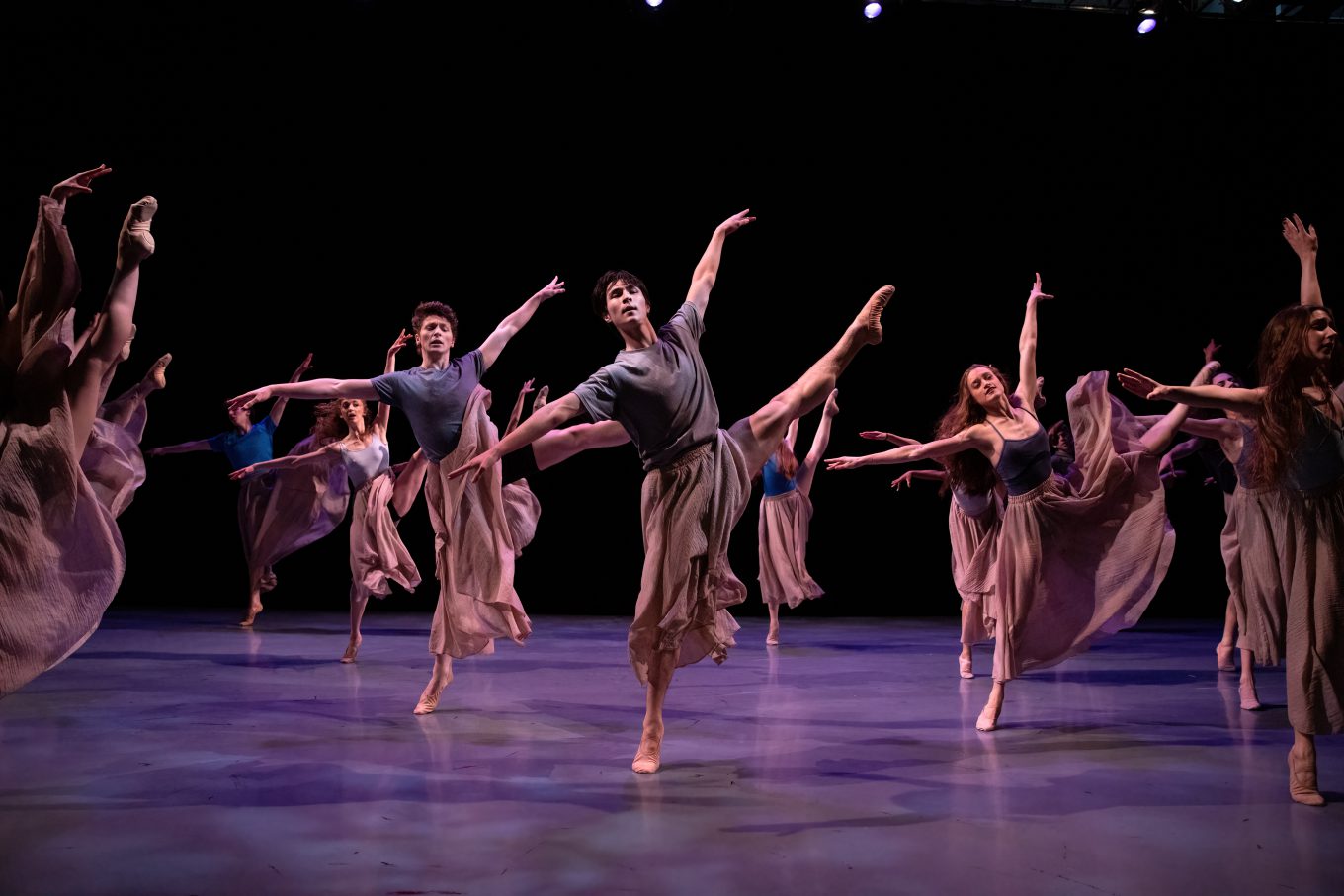 The tenth anniversary presentation of the Kansas City Ballet’s New Moves program was a thrilling return to live performance, not only for many in the audience, but for New Moves itself. The series’ first live presentation in three years welcomed visitors back to the company’s home at the Todd Bolender Center for a light, lively sequence of original delights.

In the Michael and Ginger Frost Studio Theater, the audience views the dance floor from above, and at very close distance. It is a perfect intimate setting for these pieces, which as a group felt personal and immediate.

The Kansas City Ballet commissioned female choreographers to create all seven of this year’s new works, an initiative to be applauded in a field dominated overwhelmingly (80%) by men. With such ratios, one can hardly blame the choreographers who felt compelled to address the imbalance directly, but the most rewarding moments occurred when the language of dance was trusted to communicate simply and powerfully.

The rom-com pas de deux that opens in one lies two escalates to a comical Jets vs. Sharks dance battle of the cis-genders, and ends in a timid gendered costume change — points that feel like over-determined strawmen. After all, the Mark Morris and Bill T. Jones companies, to name two, have subverted and equalized gender for decades, with women lifting men, cross-gender costumes, and pairings of every configuration. in one lies two was collectively choreographed by three KCB Second Company and Trainee members—Brooke Amundrud, Sophie Hod and Malerie Moore, which perhaps accounts for the multiplicity of themes it attempts to undertake. Polemic falls away in the luscious second act, however, when the company — Jets and Sharks — rush the stage in matching, long, gauzy skirts. As legs lift high, the skirts describe full, dramatic shapes. Legs lift, extend, arabesque. Skirts fill the air, floating and drifting, a beautiful blur, a vision of oneness and fluidity that holds. (Cast: Second Company)

With her utterly weightless port de bras and his marvelously free extension, Whitney Huell and Humberto Rivera Blanco, who duet in Sanctuary, may have been the most ethereal, ravishing pairing of the evening. Less clear was how Katlyn Addison’s lyrical classical choreography relates to the deliberate tempo and heavy rhythms of “Swing Low” and “I Want Jesus to Walk With Me” (arranged by Maria Thompson Corley). The lift of the third song, “Motherless Child,” lets Addison’s sequences flow free. The choreography becomes all soft, agile feet and effortless lifts. We arrive at pure dance and joy, and maybe that is the sanctuary.

Courtney Nitting’s refreshing H2O makes a splash playing with the covalences between its three dancers — Gavin Abercrombie as Oxygen, a charismatic charmer in gleaming white coveralls, and Amanda DeVenuta and Danielle Fu as the two sprightly Hydrogens, remarkably identical in matching blue hair ribbons and one-armed ice skater dresses and ebullient smiles. Nitting’s ingenious scientific motif allows for playful fractal patterns of repulsion and attraction, alignment and realignment — at one point Oxygen lifts and twirls both Hydrogens — in the process of achieving the final title bond.

Emily Mistretta also goes light with Ladies Lunch, which is framed with the sounds of gossip and chatter of ladies who lunch. Its all-female cast — Kaleena Burks, Lilliana Hagerman, Taryn Mejia, Emily Mistretta and Heather Nichols — pose, primp, vamp and mock in pastel Vargas Vixen bra-and-bloomer sets. Are they the ladies of the title? Or are the ladies the ones they mimic and parody? Like worldly-wise chorus girls backstage in a 30s slapstick comedy, these five are brassy, sassy and a blast to watch.

Marika Brussel’s Already Infinite is a complex large-group work that is constantly dazzling, a kaleidoscope of beauty. I’ll confess to having made very few notes as I couldn’t bear to tear my eyes away. The twelve dancers are grouped into threes and fours, each group differently costumed and choreographed. Three of the men form a time piece with mesmerizingly, precisely ticking arms. Yet allegory this is not. It is rather a dancing meditation, a galaxy swirl of infinitudes, possibility and life, as suggested by gorgeous levitating leaps and constant, calm propulsion. Set to a lush score by Ben Juodvalkis (with hints of Appalachian Spring) and featuring virtuoso performances by its cast of twelve, Already Infinite made the strongest impression of the night and grounded the program’s impressive second half. (Cast: Georgia Fuller, Whitney Huell, Courtney Nitting, Amaya Rodriguez, Joshua Bodden, Liang Fu, Joshua Kiesel, Javier Morales, Andrew Rossi, Cameron Thomas, Kevin Wilson, Paul Zusi)

Meraki is flawless; precisely conceived and true to its ideas. It’s not easy to make a pas de deux about love feel original and contemporary but Heather Nichols does it here. Her choreography is mature and thrilling. Everything of a piece, no self indulgence or cheap tricks. Nothing extraneous. This discipline lets the phenomenal Lilliana Hagerman and Humberto Rivera Blanco react to the languorous score with full commitment. Their fabulous athleticism is showcased in explosive spread eagle jumps and contractions as well as scenes of poetic yielding.

It Is What It Is, the large ensemble piece choreographed by Caroline Dahm that triumphantly closes the program, is chock full of ideas, including a rap break, after which the rapper does indeed drop the mike and leap into a bravuro solo dance passage. But despite the superfluity of elements, the whole somehow coheres. The monochromatic costumes help. Most of all, this piece’s daring and spirit of exploration feels commodious and multifarious (Ravel and Shostakovich, in addition to spoken word), big enough for questions, experiments, play and Tik-Tok challenge vibe — in short, everything New Moves should be.

I hope these gifted female choreographers are awarded many more opportunities to create new works. Their New Moves feel fresh, alive and very of-the-moment. They are incandescent with moments when the brilliant dancers of the Kansas City Ballet appeared to be cutting loose, reveling in movement and the charge generated by bodies tumbling in air, in person.