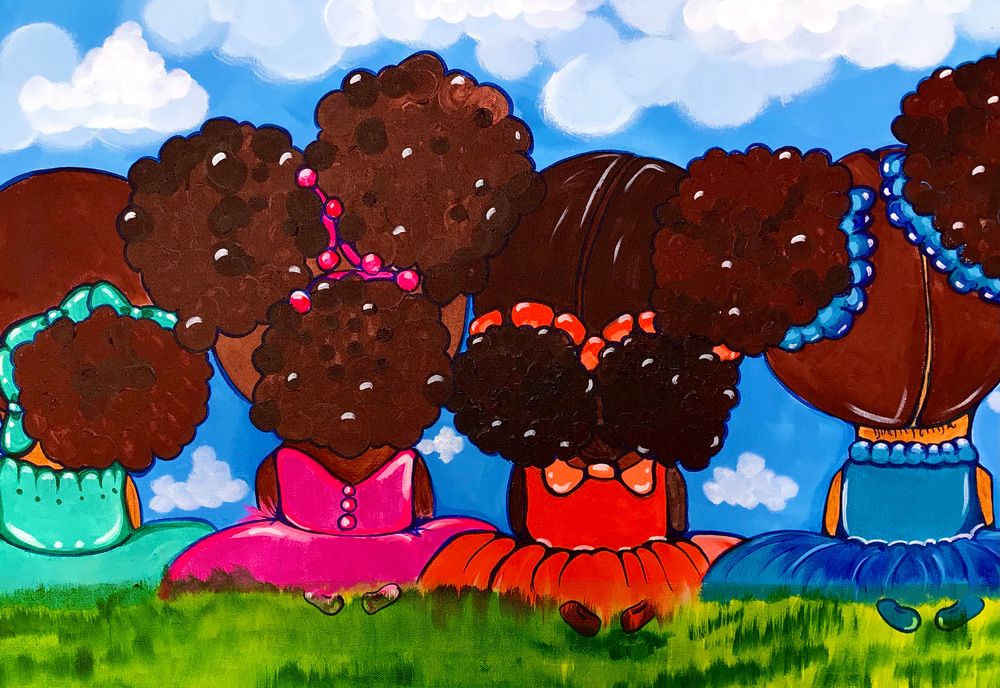 Steadily making her trek from emerging artist to established artist, Vivian Wilson Bluett takes a big step in the right direction with her new exhibition, “Expressions of Blue,” at the Natasha Ria Art Gallery.

This vibrant and emotionally uplifting exhibition engages childhood, trauma, healing, strength, resilience, and social justice through the artist’s delicate use of color, imagery, and symbolism.

With a large amount of work hung tightly in a relatively small exhibition space, “Expressions of Blue” presents a cacophony of provocative imagery that doesn’t just satisfy for its visceral palette but also nourishes the soul.

“My art is mostly influenced by the Black women I know such as my aunts and neighbors,” Bluett says in a statement that accompanies the exhibition. “Being raised in a family of majority women, I was allowed to experience different shades, shapes and styles of Black women. My work is also heavily influenced by my childhood.”

Beautiful women of color adorned with large flowing hats, innocent children integrating a segregated lunch counter, an introspective young man of color fascinated by the bee that has lighted on his nose, and eyeglass-wearing animals simply existing in peace constitute some of the paintings the viewer can expect to enjoy.

One painting that stands out is “All Spring,” a 30 x 40” painting capturing a woman with brown skin, large red hair, pouty blue lips, a floral hairpiece, and a yellow top. Her eyes are closed and peaceful, and an almost meditative expression is on her face. This painting speaks to the strength and courage it takes for women of color to embrace their identity publicly in American society and the deep sense of self-pride and serenity that comes to those who are willing to do it.

Another standout is a 24 x 48” painting from the “Childhood Day Dream Series,” which portrays five young people of color in natural hair, sitting on a field of grass, staring into a pastel blue sky. In light of several very public instances of racist acts perpetrated against children of color by other children, teachers, and even police officers, this painting reminds us that all children, by nature, are innocent and want the best for everyone else and not just themselves. This includes Black and Brown children.

There are more within this series and each one is just as engaging as the one mentioned above.

Bluett, a wife and mother of three children, has been actively painting for about 10 years and exhibiting for four. She was one of the muralists in the Black Lives Matter street mural project and was also the subject of an Honors column in “KC Studio” in January of 2021. “Expressions of Blue” follows her fall 2020 show at Natasha Ria Art Gallery, which was the gallery’s inaugural exhibition.

According to gallerist Natasha Ria El-Scari, “This is the second solo show with Vivian Wilson Bluett and I couldn’t be more excited to feature another layer of her work. With over 80 mostly new paintings in this exhibit, there is an immersion of inner child innocence and trauma, the praise of Black women femininity and the importance of bees along with a taste of Afro-futurism.”

With COVID-19 on the decline and things slowly returning to a new normal, this exhibition will lift your spirits, engage your aesthetic appetite, and provide you with good things to think about.

In conjunction with her exhibit, Bluett will give an artist talk at 6 p.m. April 7 at Natasha Ria Art Gallery, 1014 West 39th St.