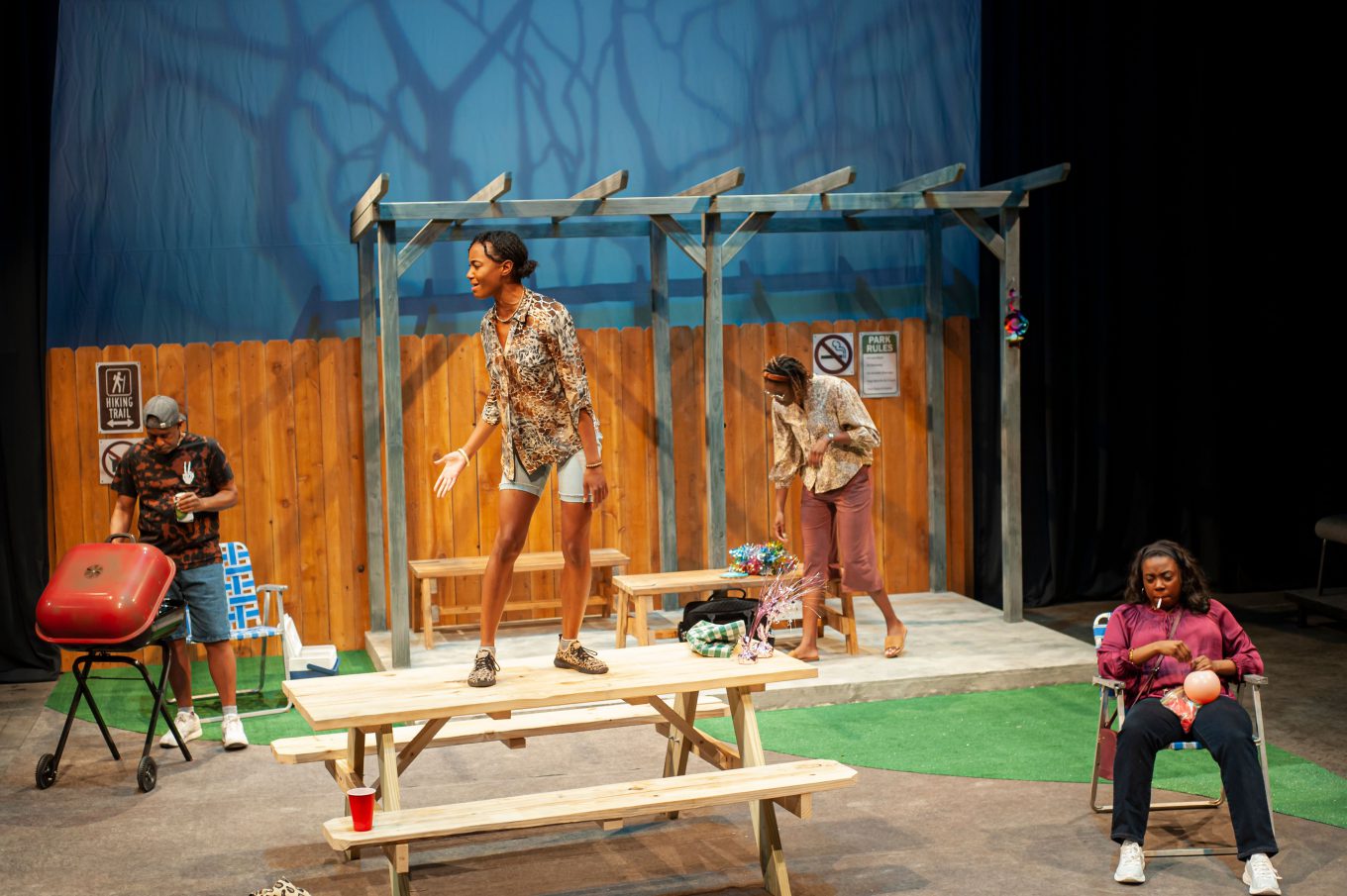 Robert O’Hara’s play “Barbecue” begins with a simple premise: A group of siblings has gathered in a public park to hold a much-needed intervention for their sister, Barbara. But as things unfold, it becomes clear that nothing here is simple, and that this play is built on mounting surprises—not just in terms of plot but in the entire presentation of the story itself.

The family’s oldest sister, Lillie Ann, has summoned her siblings—James T., Marie, and Adlean—to the park in the unnamed U.S. city to stage a fake barbecue party meant to lure Barbara out. Inspired by years of watching episodes of intervention reality TV, Lillie Ann has decided to confront her alcoholic, crack-addicted sister, whom the family has given the less-than-affectionate nickname Zippity-Boom because, as James. T. explains, “She gat two modes. Zippity. Boom. Ain’t shit in between.”

“Aint no zippity do dah,” he says of his sister. “When she taste liquor she go Zippity. Boom! Period.”

We get the feeling that things must be really bad for Barbara if the rest of this family is calling her out, as none of them are exactly beyond reproach. Nearly every one of them has their own obvious substance abuse issues, ranging from crack to alcohol to painkillers. From their clothes to their speech affectations to the open bottle of Jack Daniels that never leaves the stage, this family is the archetype of what would provincially be called “trailer trash,” or possibly “white trash.”

That is, until about 15 minutes into the play, when the lights go down, then come back up on a new cast of actors. They are playing the same characters, in the same clothes, continuing where the same action left off. Only now, the family is Black.

The casts alternate back and forth a few times before the play’s first act ends. The reasons aren’t explicitly laid out but the effect is compelling as we, the audience, are made to connect these dots. In the hands of a lesser playwright, this would likely be read as a commentary on how we’re all the same, sharing universal experiences.

In O’Hara’s sharp, nuanced satire, it’s a challenge. The audience is asked to confront our own conceptualizations of race—how it’s presented and how it’s perceived, especially in the context of theater, an art form historically and still undeniably dominated by the white gaze. (If we perceived the original family as “white trash,” to start, what do we call the Black family? Why is there no equivalent term? Is it because their behavior is more expected? Are we therefore less sympathetic to it? These are all questions that O’Hara does not explicitly ask, but makes sure we find ourselves contemplating.)

There is another reason for the dual casting, revealed in a twist at the end of the first act that is so major, I can’t in good conscience spoil it here. I will say that the second act is grounded by stellar performances by Jabrelle Herbin and Casey Jane, the two actresses playing Barbara/Zippity Boom, and expands its scope enormously to explore issues of privilege, status, and public (as well as, I suppose, self) image—specifically, the degree to which that image can be artificially crafted.

KC Melting Pot Theatre’s production of O’Hara’s play shines by putting the script front and center. In fact, the biggest issue with the play is in the script itself, which is likely to leave much of the audience wanting something of an epilogue. Or perhaps it’s that what serves as an epilogue feels tacked on. Either way, what may seem to many to be an unsatisfying ending does not cancel out the rest of the show’s brilliance. The cast handles the script deftly and the design elements (especially Doug Schroeder’s costumes and set) are simple and unobtrusive, seamlessly supporting the material at hand. The show is not served by its ¾ staging, especially in the final scenes, and audiences will do well to arrive early to make sure they get a seat in the center section, but that is the only issue that could be taken with Lynn King’s direction.

King does an exceptional job maneuvering O’Hara’s script, which rests precariously on the fine line between family-life dramedy satire and acerbic social and racial commentary, and only succeeds at either by being both things at once, at all times. Not exactly an easy feat.

“Barbecue,” a production of KC Melting Pot, runs through February 19 at the Just Off Broadway Theatre, 3051 Central. For more information, call 816-226-8087 or go to www.kcmeltingpot.com.