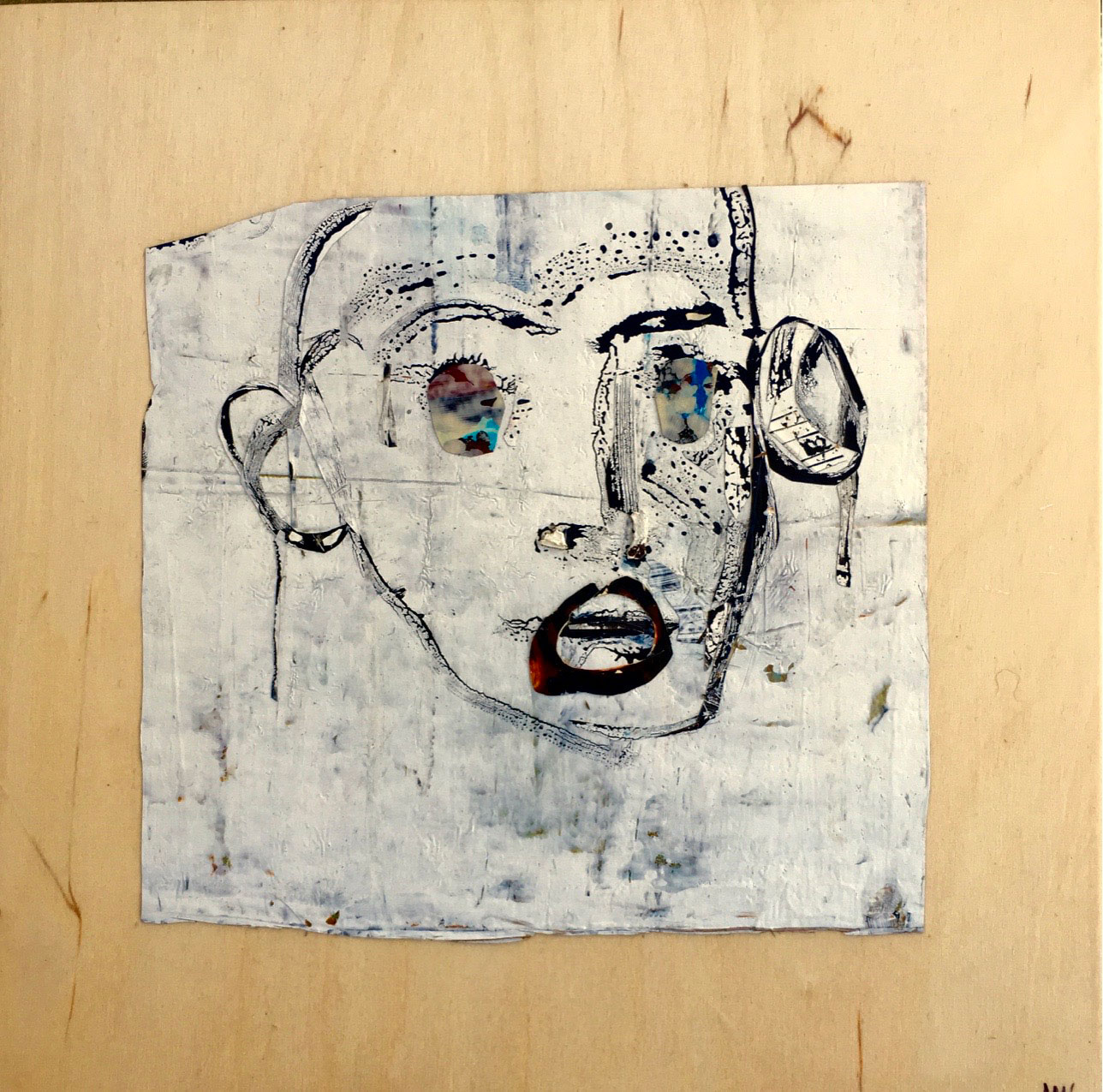 Blue in the Eyes (courtesy of the artist)

Artists make us see things we might otherwise not notice, including phenomena we normally ignore. In his exhibit “Smalls,” Mark Westervelt gives us 400 examples of how the ordinary, the discarded, even the disgusting, can be transformed into magical, aesthetic delights. ​

The title of the show refers to the scale of Westervelt’s works — his pieces are sized at 5 by 7″,  10 by 10″ and 9 by 12” each. They may be small, but they are mighty. On some, the surfaces are completely covered with a variety of markings. On others, a figure or portrait resides on an elegantly sanded and varnished block of wood. Westervelt combines painting, drawing, collage and assemblage, for the most part using dried paint chips, paint skins, debris and glue to create a myriad of images that range from the grotesque to the bizarrely beautiful, with emotions that can be anguished or ethereal or slapstick.

The exhibition, beautifully installed, is hung in what look like series, although the works were not created in any specific order. The majority were made in the last five years, but there are some earlier small works on paper from more than 10 years ago.

One wall of 16 expressionistic male portraits (wall 7), on a mottled white background with heads outlined in black and hung in a grid, could be the basis for an entire show. The faces, inscrutable and intense, radiate an inner force that is palpable. They are in a league with such past gestural masters as Chaim Soutine, or Giacometti.

Another grouping consists of 23 artfully composed, athletically inclined males that reflect Westervelt’s early background in illustration and design. Works such as “Head in the Sand” and “Goggles and Gull” are examples of these, and quite droll.

Other realistic imagery includes a pillar hung with “portraits” of octopuses that are insanely simple yet gorgeous.

Westervelt’s knowledge of art history is extensive, and his groupings of 25 figures and portraits of mostly women are pale, delicate and resonant of the rococo. The hairstyles alone, such as depicted in “Madame Bouffant,” would make Antoine Watteau salivate.

There are some motifs that Westervelt repeats throughout the show. Janus figures appear in his very earliest pieces, such as “Janus Kiss,” as well as current works. Half-figural, half animal beings — often recalling shamanic imagery — also make regular appearances in powerful works such as “Stag.” “Skip to My Lou” exemplifies his use of characters that are provocative but not entirely human.

Westervelt, a Kansas City native, received his BFA from the Kansas City Art Institute in 1990 (he also co-founded the Left Bank Gallery in the Bottoms while a student), and then earned his MFA from the University of Chicago, where he studied with the well-known artist Vera Clement. He started his career making large abstract paintings. But he noticed, when working on canvas, that a lot of paint fell on the floor and dried. He writes: “Through this process, I realized the random beauty that lives within the surfaces of the dried paint and decided it was still very much useful. I started reapplying the dry paint chips to my canvases at first, but then discovered the possibilities of scaling down the size of the current work to 5×7 inches on paper.  I use the paint chip in its natural form as well as manipulate it to a desired form. I also fabricate acrylic paint skins and then manipulate them into final abstract figures on paper and wood panels.  Approaching my work the way that I do, I am able to fulfill a desire to collage, assemble and sculpt without straying from my original discipline of painting.”

“What I like about working this way,” he said in a recent interview, “is that nothing is formalized in my head. It’s up to me to find the image. And then I ask myself: Have I had a moment when I felt like that?”

Although Westervelt’s methods may seem random, he says, “If I didn’t know how to paint and draw well enough to do photorealism, my abstract work wouldn’t work.

“People ask me ‘What are you trying to do?’ Nothing, I say. It’s all self-investigation. This is the closest thing to truth of anything I’ve ever done. I’ve surrendered to my process and my medium. I’ve surrendered myself.”