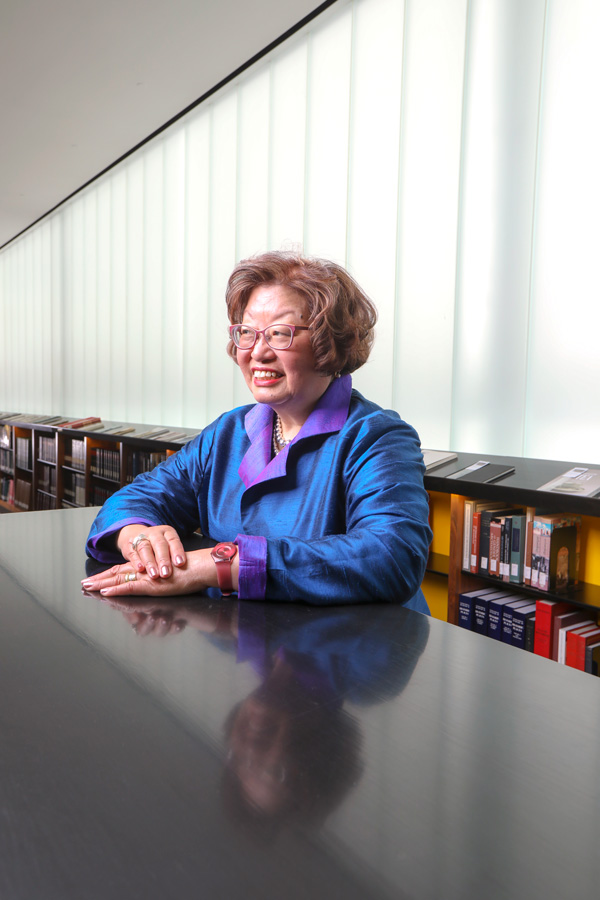 Energy, Creativity and Humor Marked Her Tenure as Head of the Nelson-Atkins Spencer Art Reference Library

Marilyn Carbonell, the popular and personable head of Library Services at the Nelson-Atkins Museum of Art’s Spencer Art Reference Library, is leaving the post she began in 2006 to enjoy a well-earned retirement.

It’s a milestone for the museum: “Marilyn significantly expanded the role of the Spencer Art Reference Library regionally, nationally and internationally,” said Carbonell’s supervisor, Anne Manning, director of Education and Interpretive Programs. “She has been an incredibly generous colleague who helped all learners — from curators and art historians to students and teachers — connect with art and ideas.”

She also, Manning said, “built a significant research collection of over 250,000 books and resources in 11 languages.”

Among Carbonell’s signature achievements at the Nelson-Atkins is the Artists’ File Initiative (AFI), a collaborative project that she started in 2015 to archive the lives and careers of artists based in the Kansas City area. Partners in the project include the Kansas City Artists Coalition, gallerist Todd Weiner, curators from local institutions and other artists, who recommend artists for the file. Currently, more than 250 artists appear on the AFI matrix, and more than 90 have contributed biographical information and artifacts to their files. Active artist files can be accessed at
www.nelson-atkins.org/library.

A high point was Carbonell’s presentation on the Artist File Initiative at the College Art Association’s annual conference in 2015, which introduced some of the Kansas City-based artists in the archive to art librarians from all over North America.

Yet Carbonell’s impact at the Nelson-Atkins goes well beyond the AFI. As a member of the advisory committee of the UMKC School of Medicine’s Medical Humanities and Bioethics Program, Carbonell helped develop academic-focused Medicine in Art tours, designed to help medical students build observation skills that they can translate to medical exam rooms.

Carbonell’s stewardship of the Karen Gould Collection of Medieval Manuscript Leaves and Renaissance Printings at the Spencer Art Reference Library resulted in the acquisition of a remarkable leaf of the Saint Albans Abbey Bible dating from approximately 1330, acquired through the generosity of Lewis Ludlow Gould. In addition, UMKC Professor Emerita Linda Ehrsam Voigts donated the earliest manuscript in the collection, a 12th-century Italian text on parchment created for monastic liturgical use.

Carbonell also worked with local supporters to develop a collection of Thomas Hart Benton’s commercial work and memorabilia. Standouts include a 1940 special edition of John Steinbeck’s “Grapes of Wrath” illustrated with Benton’s lithographs, donated by Richard Rees in memory of his wife Janet, and a 1942 publication “The Year of Peril: A Series of War Paintings by Thomas Hart Benton,” signed by Benton, donated by John and Kay Callison.

A lifelong love of books and art
Art and libraries have intertwined throughout Carbonell’s life. Growing up in the Chicago area, she developed an early love of art thanks to family visits to the Art Institute of Chicago. She received a B.A. cum laude in art history from Knox College in Galesburg, Illinois, a master’s degree in librarianship from Northern Illinois University in DeKalb, and a master’s degree in art history from the University of Iowa. Her art history expertise served her well at the Spencer Art Reference Library, enabling her to work with curatorial departments as a peer and partner in developing research projects and exhibitions.

Carbonell also taught art history as adjunct faculty at UMKC, where she began her time in Kansas City at the school’s University Libraries in 1976.

During her 30-year tenure at UMKC, Carbonell sought to create greater access to learning resources. “At the dawn of the online era in 1976-77, I participated in a project to share online reference source subscriptions and to train staff how to use online resources,” she said. “This project included public libraries, academic libraries and special libraries in medicine and law on both sides of the state line in the Kansas City region. Later the cooperative, shared subscriptions for the four UM campuses were extended to Washington University Libraries and St. Louis University Libraries — the group of libraries that eventually founded the MERLIN library consortium (Missouri Education and Research Libraries Information Network).

“It sounds dry,” she added, “but we can thank early collaborative projects like this for being one of the reasons that we can look up books and articles in almost any library in Missouri today.”

Carbonell also demonstrated the value of having librarians work closely with faculty early in the development of a course, so that the library could procure the newest scholarship in a field as a course was being planned. The practice was so successful that the Reference and User Service Association of the American Library Association asked Carbonell to help publish national guidelines recommending how librarians can work as liaisons more successfully.

With an energy level this high, it’s hard to imagine Carbonell slowing down. Like many in retirement, she plans to spend more time with family.

Asked about work-related retirement goals, she replied, “This reminds me of a ‘Psychology Today’ article decades ago about ‘What to Do When I Grow Up!’ Number one is to continue supporting libraries, learning and local and regional history projects. Two: Continue volunteering for KCUR. Three: Learn Spanish, interrupted many years ago. Four: Keep reading fiction, especially mysteries, and keep reading poetry. Five: Keep listening to Rock and Roll!”

To mark Carbonell’s retirement, The Print Society purchased a print by Asad Faulwell for the museum. His “Djamila” (2018) is on view through August 12 in the “Unexpected Encounters” exhibition.