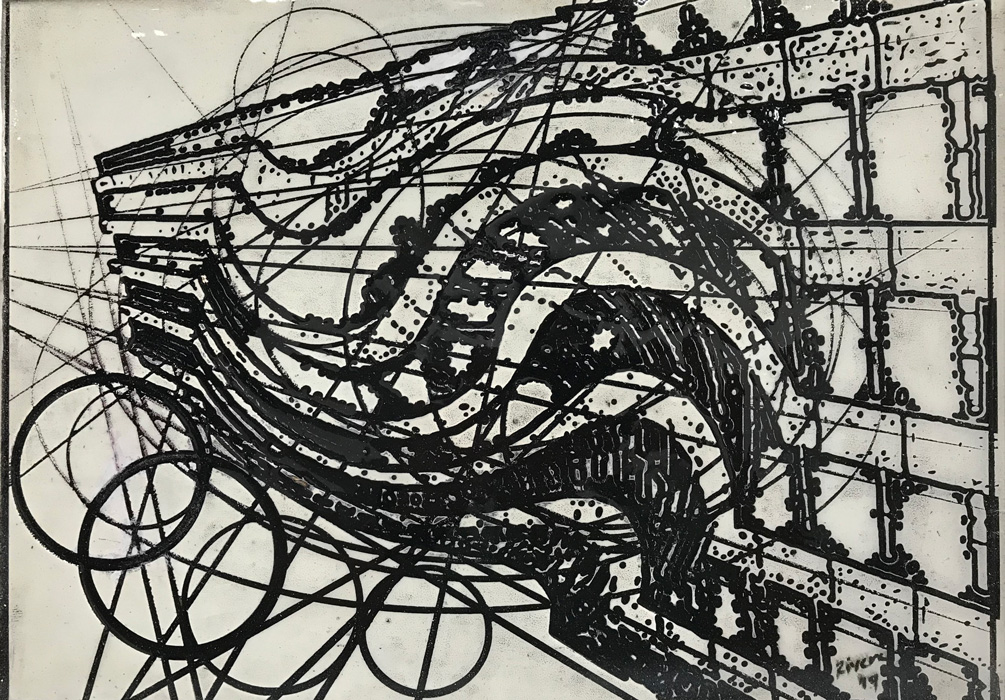 As Miguel Rivera winds up his three-year residency at Studios Inc., he departs on a high note with his solo exhibition, “GEO/MATRIX.”

Rivera began his tenure as the chair of the printmaking department at the Kansas City Art Institute in 2008. Since then, he has exhibited at the Mexican Consulate in Kansas City, the Kansas City Artists Coalition, Cara and Cabezas Contemporary (now defunct), the Nelson-Atkins Museum of Art, Todd Weiner Gallery, and Weinberger Fine Art, which represents him currently.

Much of the “GEO/MATRIX” show stems from Rivera’s 2018 residency at the International Printmaking School in Venice, Italy.

The engrossing, multilayered eight-panel work “Cannaregio” refers to the eponymous district in Venice where the artist’s studio residency was located. In the background, Rivera utilized woodcut to create a whorl-like black-and-white image of a virus. He then used a laser cutter to remove sections of the whorls, resulting in eye-catching textures and patterns. Images taken from Albrecht Dürer’s “Samson Rending the Lion” woodcut also appear in the background of “Cannaregio.” The middle ground of the work features a meandering line that resembles a coastline on a map. Slashing diagonals and pendulous curves in the foreground impart energy and movement and perhaps illustrate Rivera’s contention “Nothing is straight in Venice!”

The artist’s interest in the history of viruses was one of the primary inspirations for his Venice residency. The Black Plague swept through the city in 1630, and Venetians built the Basilica of Santa Maria della Salute afterward to celebrate the end of the outbreak. Rivera commemorated his study of this history with the large multi-panel work “La Salute.”

Smaller scale works in the show also appeal. A suite of four sumptuous mixed-media works on wood panel utilize GPS coordinates as titles, such as “21.0190 N, 101.2574 E,” which corresponds to Louang Namtha, Laos. Relatively spare monochromatic works of paint and black toner pack a lot of action into a small space.

Snippets of figures by Albrecht Dürer appear not only in the monochromes and in “Cannaregio,” but throughout the backgrounds in this body of work. They may stand as personifications of Western civilization or of the church. If so, then Rivera’s use of virus imagery seems to connote the decimation of indigenous populations through diseases spread by colonists.

The work that may address colonization most directly for Kansas City viewers may also be the most personal to Rivera. Imagery in “In Between WPWW” refers to the Oregon Trail, which began in Independence, Missouri, and ended in northern Oregon, passing through parts of what is now Kansas City and northeast Kansas. The work’s looping forms suggest movement, while its linear arrangement brings to mind trail maps of the U.S. westward expansion. At the exhibition’s opening reception, the Myth-Science Trio performed a lively composition for clarinets inspired by this work, written by Rivera’s KCAI colleague Dwight Frizzell, joined by Thomas Aber and Michael Miller.

Rivera seems to empathize with those displaced by migration. He was born in Mexico but received his BFA from Southern Oregon University and his MFA from West Virginia University.

He states, “I’m neither Mexican nor American. I’m my own thing. I’m a naturalized American citizen — my wife is American — who doesn’t fully fit in either in the U.S. or in Mexico.”

Apart from addressing compelling themes, Rivera’s show affirms the ongoing importance of the Studios Inc mission and its crucial place in the Kansas City-area art ecosystem.

The nonprofit mission of Studios Inc. is to serve mid-career artists by offering residencies and other programs to artists who “are poised to significantly expand their careers in accordance with the career goals articulated in their residency applications.”

According to Rivera, “GEO/MATRIX” is the most complex exhibition that he has mounted in Kansas City in terms of the scale of his work and in dealing with subject matter research.

Studios Inc. executive director Courtney Wasson notes “His current exhibition contains three large-scale works (the largest being over 6 feet tall by 14 feet wide), and his work is currently included in five exhibitions showing regionally and nationally with representation in both Kansas City and Seattle. It truly is a pleasure to see the impact that having time and space to create can have on an artist.”