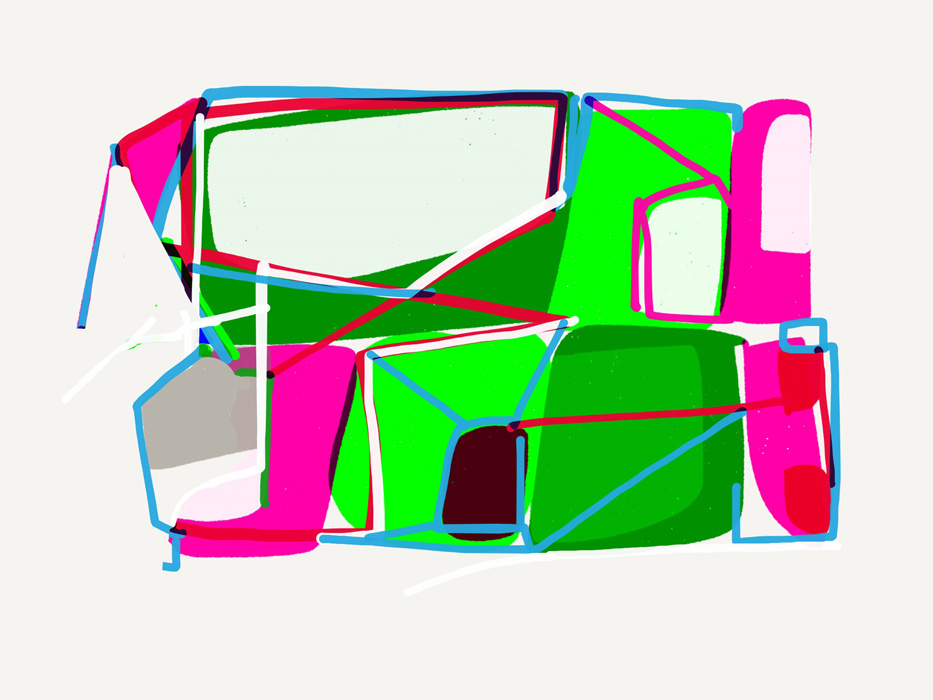 Long before Kansas City art achieved the respect it enjoys today, Nate Fors made local history with an exhibit at the Nelson-Atkins Museum of Art.

That was 25 years ago. Since then Fors has continued the momentum, showing at the Byron Cohen Gallery, Joseph Nease Gallery, Dolphin, and now Haw Contemporary. His works are represented in the collections of the Nelson-Atkins Museum of Art, the Kemper Museum, JCCC’s Nerman Museum and KU’s Spencer Museum of Art.

His career is marked by an embrace of experimentation, including paintings festooned with light, public art made of painted inner tubes and installations featuring feather boas and dog toys. More recently, he pushed himself by creating video, costumes and sets for the Owen/Cox Dance Group.

The following pages feature the results of Fors’ most recent line of experimentation: colorful drawings created on his iPad using a free app called Paper, made by a company called 53.

As Fors explains the process, “I used a Bluetooth stylus that looks like an old-fashioned wooden drafting pencil that 53 sells. The Paper (app) comes with various tools, including an eraser, that can be selected to make different types of marks. You can also rewind. You mix your own colors in the app. It is very simple and pretty sweet.”

“One beauty is that there is no cleanup and you can do it anywhere,” he added.

Perhaps the most striking attribute of these iPad compositions is their spirit of freedom. The play of buoyant shapes and webby linear overlays, like facets unloosed from the surface of objects, yields jazzy rhythms along the lines of American modernist painter Stuart Davis.

Like Davis, Fors employs intense, flat colors that endow the works with graphic punch. The results are fresh and unfettered, juicy and fluid, reflecting the ease of execution offered by stylus and iPad and the opportunity they offer to register the flash of an idea or impulse at the moment it strikes.

“It’s very liberating,” Fors says, “because you know this piece is going to be done today, and not rethought and worked on. That’s the beauty of making big paintings, but with these you can correct or edit or revise quickly — and there’s no drying time!”

Play may be the operative mode here, but Fors doesn’t entirely relinquish his serious side. Titles such as “soul doubt” and “inner varmint” point to an underlying dimension of self-reflection, while “white boy puzzle,” “apocalypse noun” and “motive vacuum” suggest a preoccupation with moral and social questions.

These Artist Pages mark the debut of Fors’ iPad drawings, which at present exist only as digital files. Eventually, Fors says, he plans to issue them as a series of prints.

Images courtesy of the artist and Haw Contemporary