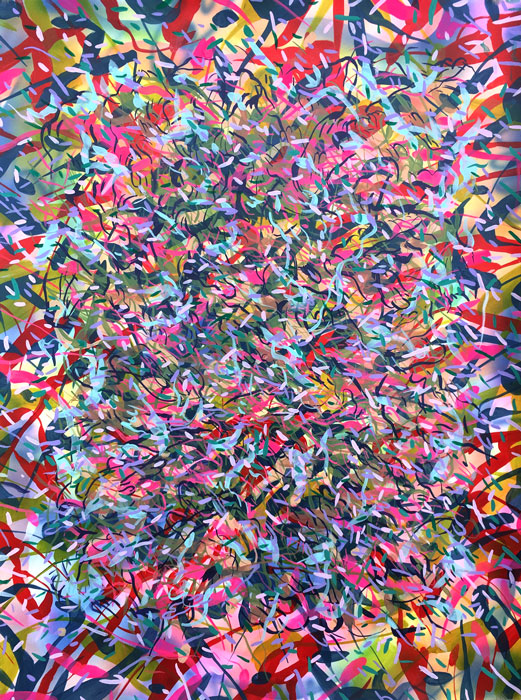 Five years out of the Kansas City Art Institute, Madeline Gallucci is making her mark on the tradition of Kansas City abstraction, bringing it up to date with the information explosion and frenetic pace of the digital age.

As a painter, Gallucci mines the tradition of Abstract Expressionism, but she imprints it with her own generational and gender stamp.

Pink?  You bet. Soft and curvy? —also a pronounced element of her vocabulary. Instead of full-arm gestures, Gallucci layers small strokes and shapes in all-over patterned expanses suggestive of camouflage or densely compiles them in explosive, confetti-like configurations connoting digital debris.

The new paintings on view at Weinberger Fine Art offer an update of Gallucci’s activity since her appearance last fall in the Charlotte Street Awards show at Kemper at the Crossroads.

There’s a lot of continuity, including the avoidance of stretcher bars in favor of hanging the unstretched canvases from grommets, or, in the case of “Tarp Pattern #2,” using colorful bungees laced through the grommets to hold the painting to the wall. This disavowal of rigidity is a central metaphor of Gallucci’s vocabulary and presentation, also evident in her squiggly shapes and looping lines.

In her essay for the Charlotte Street exhibit, writer Annie Raab remarked on the artist’s openness to finding inspiration anywhere, from utility scrawls and old gum seen on sidewalks to airbrushed motorcycles and elaborate desserts.

Those touchstones hold in the current paintings, as does Gallucci’s ability to slice through the culture in multiple ways by re-contextualizing the common things that inspire her, and instilling them with new meaning.

Take the airbrushed motorcycles, which Gallucci characterized as “macho older men demonstrating their skill on motorcycles.”  Of course, when a young woman thinks airbrush, it suggests smoothing imperfections, particularly when it comes to enhancing images of women.  On a formal level, the artist also likes the softness that airbrush imparts.

During a recent studio visit Gallucci added Realtree company’s pink camo duct tape — a feminine version of camouflage — to her list of influences.  But for Gallucci, there’s more to pink than girly.  Although the flickering fluorescent pink marks in canvases such as “The Sun will Soon Burn Out, Causing Many People Great Relief,” may put some viewers in mind of crowds of women protesters in pink pussy hats, Gallucci says “I don’t think of pink as feminine.” It is a color that “generates a spectrum of responses,” she said, including “baby,” “sex” and “flesh.”  “Fluorescence,” she adds, “is a danger, warning sign.”

Gallucci’s vocabulary of shapes and strokes sparks conversation with many painters who have preceded her. While “Tarp Pattern 2” incorporates echoes of Larry Poons’ dots; a commitment to sinuous curving forms aligns her with New York artist Karin Davie. Gallucci’s “gum-on the sidewalk” attraction recalls the spills and puddles traced by L.A. abstractionist Ingrid Calame. Her hooked strokes quote Jackson Pollock’s drips but also share an affinity with Islamic calligraphy On a meta-level, Gallucci’s compositional attraction to teeming organic forms conjures swarm intelligence, in which group knowledge prevails over the will and leadership of a single individual.

Decorative is not a misplaced adjective for these paintings, but it’s a subversive decoration, embedded with references to a wide range of issues and cultural concerns. The motif of camouflage, for instance, points to the pattern’s use in war, and then there’s that wavery diagonal net that undulates across the bright, multicolored surface of “Sunset, Screened.” The off-kilter positioning and squiggly mesh stand as a rejection of the rigid, linear grid and the mindset behind it.

Gallucci points out that the net also functions as a barrier. “After the election,” she said, “I was feeling more closed off from all that is joyful. What if you couldn’t access that joy?”

“New Works by Madeline Gallucci” continues at Weinberger Fine Art, 114 Southwest Blvd., through April 29. The gallery is also featuring new works by Brenda Zappitell. Hours are 10 a.m. to 6 p.m. Tuesday-Friday and noon to 5 p.m. Saturday. For more information, 816.301.4428 or www.weinbergerfineart.com.