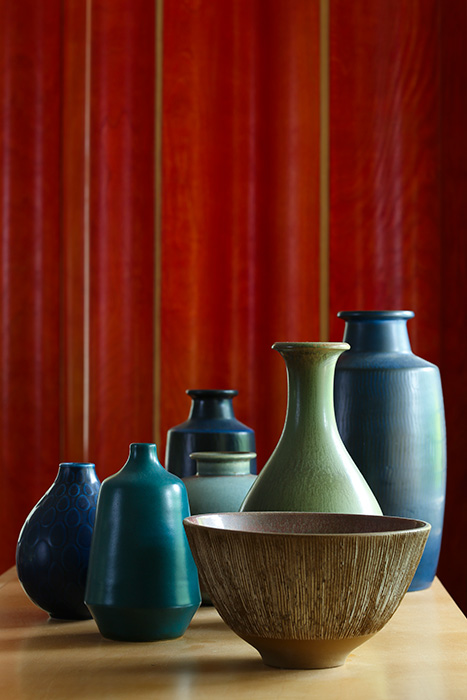 The shapes are minimalist but sensuous; the glazes are astonishing, ranging from the most austere white to rich wine-colored reds and cobalt blues. Some pieces have surfaces that are noticeably smooth and flat, while others are densely patterned, even nubby in texture.

Grouped on multiple tables throughout the Armour Hills home of Sid and Terry Garrison, these mid-century Scandinavian ceramics mutely testify to the electrifying power of sheer beauty and form.

The couple have been collecting them for a quarter of century, after Sid Garrison looked at a 1980s Robert Mapplethorpe photograph and became fascinated by a ceramic vessel he saw in the picture.

Mapplethorpe was renowned for his black and white photos of nudes, but he also created highly stylized still lifes. Garrison, an artist whose work consists of subtle, abstract pencil marks, was drawn to the spare and elegant shape in the photo. When Mapplethorpe’s estate was auctioned off, Garrison bought the
catalog.

“There were four ceramic pieces I wanted but I couldn’t afford to buy anything at that time,” Garrison recounts. “Later I tracked down the dealer who got them, and he explained what they were—midcentury Scandinavian ceramics. And then I bought the pieces from him. I also began to educate myself. ”

Which wasn’t easy. Back then there was little written in English about Scandinavian ceramics and there was no such thing as Google or Amazon. So Garrison did what every student did before the internet made it easy: he went to the library. “For the most part,” he says, “I had to Xerox articles from American Craft
magazines from the 1950s.”

He also scavenged for what books were out there, no matter what the language.

After months of research, in 1993 he took the ultimate collector’s plunge: he traveled to Sweden, Norway and Denmark and started hunting for ceramic art.

“I went before this material was collected much, and established relationships with collectors and dealers who would also come to the antique fairs in San Francisco where I lived,” Garrison notes. Like all passionate treasure hunters, Garrison had collector’s radar that worked over-time. “I remember sitting at an airport once,” he says, “and somehow I found out that the man next to me had Scandinavian ceramics; next thing I know I ended up buying one of his pieces.”

Fifteen years later, Garrison and his wife Terry had acquired almost 200 ceramic vessels and platters. The majority date from 1935–1965, but there are also pieces from the 1920s and ‘70s by top names in the field.

Artists are often the first to notice and collect objects whose beauty and originality have traditionally been overlooked. Only recently have ceramics been acknowledged as a fine art form in America, and vintage Scandinavian works are still little known in the States, even in Kansas City, a town notable for its ceramic collection history.

Cary Esser, professor and chair of the ceramics department at the Kansas City Art Institute, proffers an explanation of why, until lately, Scandinavian ceramics have been little known here.

“Scandinavian pottery was more about design that was very controlled, while Americans were interested in the studio pottery movement, which was about the mark of the hand, and gesture and movement,” she says. Ceramic artist/teachers like Robert Arneson and Peter Voulkos were more sculptural and expressionistic, Esser notes. “But enough time has passed now,” Esser says, “and you can see how incredible and really gorgeous the Scandinavian ceramics are.”

Garrison and his wife stopped collecting art pottery in 2007 when prices began spiraling upward. “A piece that cost 250 dollars 20 years ago,” Garrison notes, “could now easily sell for ten times that, or more.”

David Mann, director of Freeforms, Gallery 215 in New York’s Chelsea art district, specializes in mid-century Scandinavian and European ceramics and glass. In a recent interview he explained some of the reasons behind the high quality of so many Scandinavian artworks.

“Like a lot of European artists at the turn of the 20th century, Scandinavians saw the ancient ceramics coming out of Asia, and they obviously looked at and emulated the shapes of the pottery. For utilitarian purposes, however, they preferred using stoneware to porcelain, because stoneware lends itself much more to hand-work and can achieve spectacular glazing effects. And what really helped,” Mann notes, “is that the Scandinavians shared their information on glazes with one another, which artists did not do in other countries.”

“It is difficult to now know what some of those glazes are,” Garrison says, “because during World War II certain Scandinavian countries, such as Denmark and Norway, were under Nazi occupation. The artists had trouble getting materials, so they had to invent their own glazes by using what was at hand, such as light bulbs, which they smashed and used instead of silica.”

Both Garrison and his wife were born and raised in Wichita. They moved from the Bay Area to the Armour Hills neighborhood in Kansas City two years ago. Their 90 year-old, two-story home, which has been extensively remodeled inside, is the perfect backdrop not only for their ceramics but for the Scandinavian furniture they collect, as well as the tables and rugs they personally designed, and other contemporary artworks.

Throughout both floors of the house is the most noteworthy collection of all: Garrison’s own pencil on paper artworks, which share the walls with a fastidiously
well- chosen group of drawings by other artists such as Jacob El Hanani and Marco Maggi whose work represents Uruguay now at the Venice Biennale.

Garrison’s art has been exhibited widely. He is affiliated with the Danese/Corey Gallery in New York, which also shows artists Larry Poons, Deborah Butterfield and Roz Chast. His work has been exhibited regularly at several Bay Area galleries, and he has shown at other prestigious spaces such as the now closed Knoedler Gallery.

Garrison’s art is as obsessive and exacting as are his collector’s instincts. It is impossible, whether up close or six feet away, to distinguish any of the thousands of marks he has made on the paper he uses. When he works with colored pencils, his surfaces are slick, seductive and playful, full of unexpected juxtapositions of pattern and color. His black and white drawings are more delicate and piquant, even ethereal. It seems clear that his personal work articulates certain internal truths that also reverberate in his art collections.