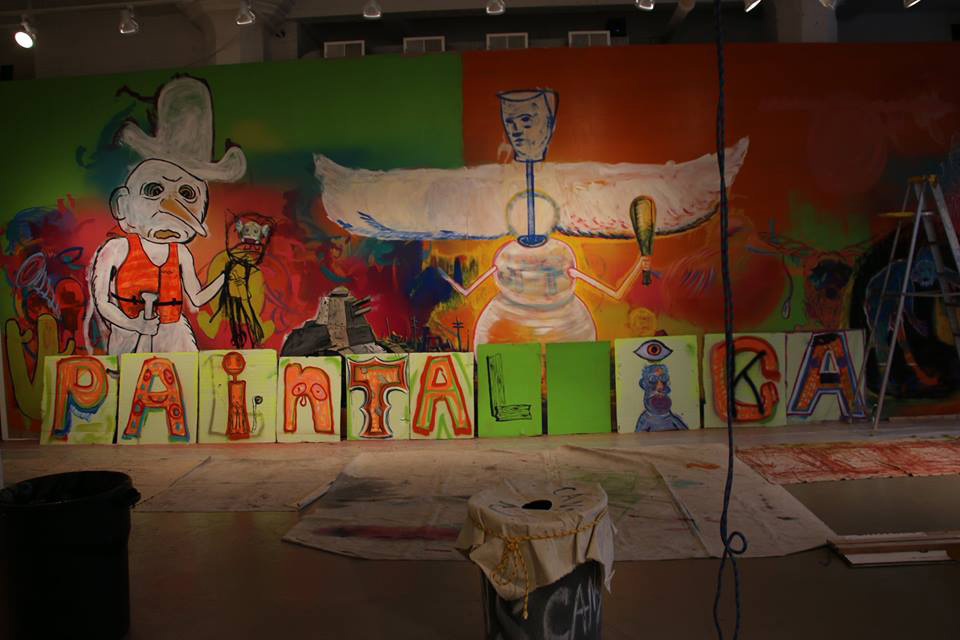 Entering the gallery space, there is almost too much to take in. A 30-foot-long, floor-to-ceiling mural titled “Bad Weed” depicts a radioactive tank, a mutant cyborg elephant being piloted by a duck-man with an iconic, red, Make America Great Again hat, and many more deranged creatures and objects. Sculptural elements project out of it, including a spinning black and white spiral and a cow’s head made of cardboard boxes.

There are similar paintings, including “Center of the Universe” which depicts an enormous baby with an anus for a face and two sagging breasts, one labeled “SWEET” and the other “SOUR.” A man emerges from the creature’s vagina with the words “Yale Art Dept” written on his shirt. In another painting, “Outhouse,” gun barrels emerge from a wooden shack and a signpost points the way to Waco and Ruby Ridge.

Hanging by enormous iron chains from the ceiling of the gallery is an equally enormous wooden club, roughly 15 feet tall and at least 3 feet wide at one end. Studded over the surface of “Club” are little wooden pegs, like the spikes on a weapon.

Towards the back of the gallery is a large tent, big enough to hold a couple dozen people, covered in surreal imagery and slogans including “Slime Shop” and “FLUNK OUT.” Hanging above the entry to the tent is a plastic sculpture of a wiener dog, labeled “Our Mutt” on one side and “R. Mutt” on the other, the pseudonym used by the Dada artist Marcel Duchamp. Above the dog is a plastic mask of Donald Trump and inside the tent is a pile empty beer bottles and a pile of masks belonging to every recent and some not-so-recent presidents.

As part of the exhibit, visitors can watch a video of Paintallica setting up “Worst Show Yet,” with accelerated footage of murals being painted, sculptures installed and communal meals of barbeque and beer, all while wearing the plastic cartoon masks of presidents. Watching this process, the masquerade feels like a comedy routine, allowing the artists to make excessive gestures and displays, but also like some animist ritual, as if the artists are channeling spirits. In either case, the masks allow for the obliteration of personal identity, and a transition into a collective, communal state.

There is no denying the left-wing position of “Worst Show Yet,” and while one could certainly try to imagine its right-wing equivalent, there is something fundamentally leftist about collaborative art practices of this nature. The KC art scene, like the larger art world, has long been dominated by left politics, precisely because they both share the same modern liberal premise that the truth of the world can be revealed through reason and critique. In the 1700s this was called “Enlightenment.” In the 2017 it’s called being “woke.”

Yet something dramatic has changed in 300 years. Where the Enlightenment philosophers once promised progress and a brighter future through reason and science, today the left is focused on averting disaster, whether it be political, ecological, financial, technological or otherwise. The scenes in “Worst Show Yet” are not hopeful images of the present or future. And it’s exactly this narrative, of the left having no vision for the future, that has so often been applied to Hillary Clinton’s campaign.

But “Worst Show Yet” does offer one way forward, epitomized by the slogan “FLUNK OUT” scrawled across their canvas tent. Despite the self-mocking tone of the slogan, this is precisely how “Worst Show Yet” was made: by a dozen artists setting themselves apart from society for a week, creating their own shared language and symbols, donning masks and new communal identities.

Fundamentally, Paintallica’s “Worst Show Yet” is an appeal to those who still believe in the grand Enlightenment narratives of History and Progress. It’s a come on: ‘Why not drop out? We might not be able to fix the world, but we can do things better over here.’