Project X is The Hangover for minors. 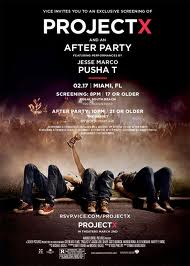 Plato once remarked that boys should abstain from all use of wine until they are adults, for it is wrong to add fire to fire.  With the release of “Project X” we are assured that boys have not changed much in the last 2,300 years.

The new film, the debut of director Nima Nourizadeh and produced by Todd Phillips (director of “The Hangover”), chronicles the 17th birthday party of suburbanite Thomas (played by Thomas Mann). He is an average kid living the average white kid life in Pasadena, Calif. His loud-mouthed friend, Costa (played by Oliver Cooper) is planning on throwing him a birthday blast and wants to record the entire day on film. That makes sense, ever since hand-held cameras have been in existence, teenagers have been filming all sorts of stupid stuff (“Jackass” for example). Behind the lens is Dax (played by Dax Flame), an A/V geek who rarely speaks, he is your eyes and ears for the next 90 minutes.

They start the day with Thomas receiving the keys to his parents’ minivan as his birthday present with a list of rules of what not do since Mom and Dad are leaving town for the weekend. In secret we learn that even Thomas’ own dad thinks his son is a loser. The boys pick up their third wheel J.B. (played by Jonathan Daniel Brown), a nerdy, overweight outcast. This crew of minors mirrors the crew from “The Hangover” – Thomas is the weak Ed Helms, Costa is the overly confident Bradley Cooper and J.B. is the heavy set, weirdo Zach Galifianakis.

Costa makes a point of e-mail blasting and texting everyone at his school to let them know of the party. After of making a daring drug deal, the party is set to begin. They head back to Thomas’ house and it’s time for the audience to turn off their minds for rest of the film and watch as a party for 50 people turns into Armageddon of 2,000 people.  It plays out exactly as a party should play – barely organized, no sense of direction and completely out of control.  A Dionysian utopia in the suburbs gone completely wacko.  We live through a night filled with sex, drugs, booze, an angry midget, a man with a flamethrower and finally the SWAT team to battle a riot of teenagers.

The writers do try to throw in a small love story about Thomas and his best female friend Kirby (played by Kirby Bliss Blanton), whom he grew close to before Costa showed up from Queens. For reasons unknown, this loser hooks up with the hottest girl at the party and his best friend, Kirby, all in one night. Again, you have to remind yourself, it is a party and it doesn’t have to make sense.

In the end the losers are hailed as kings and the dad is secretly proud of his loser son for throwing such an outrageous party that destroys not only his home and his cars, but also most of the neighborhood.

Should you see this movie? Are you a male between the ages of 17-22? Yes, then this will be the movie that will set the bar for you. This movie will certainly get a lot of response from concerned parents after their children try to out do what the boys of Pasadena do here.

Every generation has these party films – “Animal House,”  “Fast Times at Ridgemont High,” “Risky Business,” and “Go” to name a few. “Project X” will be played over and over again at high school parties and frat houses across America. It’s going to be that movie that plays in the background while the youth of America live out their own rites of passage at keggers and rave parties.