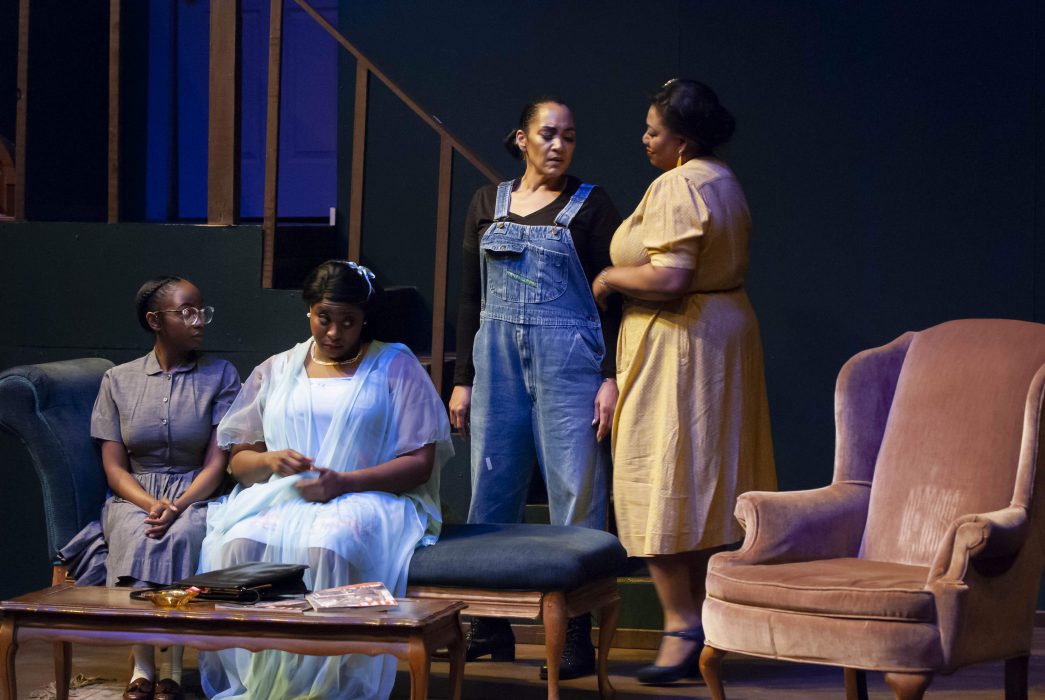 Some outstanding performances and a playwright’s audacious approach to history make the latest production at KC Melting Pot Theatre one that will linger in memory.

Michelle Tyrene Johnson pursues an ambitious goal with her newest play, “The Green Book Wine Club Train Trip.” Her aim is to tell a compelling story that contrasts the experiences of African-American women in 2017 with those in 1946 and make a cogent point about how things have changed for women of color — and how they haven’t.

The result is a two-act play for a cast of five that takes a hard look at social realities then and now. Johnson, in post-performance remarks Sunday afternoon, said she began writing the piece years before anyone had heard of the 2018 movie “Green Book,” which took its title from a booklet first published in 1936 for the benefit of African-American travelers who wanted to avoid the most segregated and dangerous areas of the country.

The Green Book performs an important function in Johnson’s play, which also makes a passing reference to an incident in 2015 in which members of an African-American women’s book club were removed from the Napa Valley Wine Train for apparently being too “boisterous.” Johnson uses those building blocks to construct an unorthodox plot line that includes time travel, explained as a “wrinkle” in the space-time continuum. Adding a science-fiction device to an otherwise naturalistic play is a little jarring, but ultimately Johnson finds a way to make it work.

The piece opens with five friends on a train from Kansas City to St. Louis. The youngest of them, Marie (Khrystal Coppage), is an enlightened feminist conducting research related to the original Green Book. Her four older pals — Alicia (Lanette King), Saige (Jabrelle Herbin), Toni (Karis Harrington) and Lynn (Cecilia Ananya), are more interested in kicking back and having a good time, although Lynn keeps a maternal eye on Marie.

At a stop in Boonville, Mo., Marie gets off the train to explore the station when, suddenly and inexplicably, she finds herself thrust into 1946, when segregation was a fact of life and race and gender were discussed in terms long ago relegated to history. Marie finds her way to a boarding house, which in fact is a bordello, where she meets the proprietors, Bertha (Ananya) and Henrietta (Harrington), as well as two of the residents, Lucy (Herbin) and Cotton Blue (King).

The contrast between then and now is sobering and comic — sobering because, as Johnson makes clear, we still have room for vast improvements in how we think about race, gender and sexuality, and comic in the non-plussed reactions of the ladies in the ‘40s when Marie drops references to iPhones and other commonplace 21st century realities they have no concept of. There are no men in this play, save for the feet of a corpse we glimpse in Act 2. The glue that holds it together are the relationships between the women, which are fractious at times but for the most part supportive and loving.

We get terrific performances from King, whose transition from the lively Alicia to the almost childlike Cotton Blue is stunning; and Ananya, whose evocation of Bertha’s fierce independence and wisdom gives the show formidable muscle and deep compassion. The charismatic Harrington draws a cleanly delineated line between the partying Toni and the mannish, take-no-flack Henrietta. Herbin doesn’t make much of an impression as Saige, but as Lucy she delivers a commanding performance that ranges from pugnacious combativeness to healing maternalism. Coppage in a way has the most challenging role as Marie, and although she seems tentative in the early going, her performance reveals a quirky sense of humor and acquires authority as the show progresses.

Director Teresa Leggard and scenic designer Theresa Kelly create three playing areas — the boarding house, the present-day train car and a railroad waiting room. The train car, situated on the right side of the stage from the viewers’ perspective, feels too far from the audience, for which the actors fail to adequately compensate. The dialogue we can make out is pithy but too much of it is unintelligible.

Nitpicking aside, a haunting quality permeates the play. It will stick with you. Johnson prompts sober reflection — which, come to think of it, is what a playwright is supposed to do.