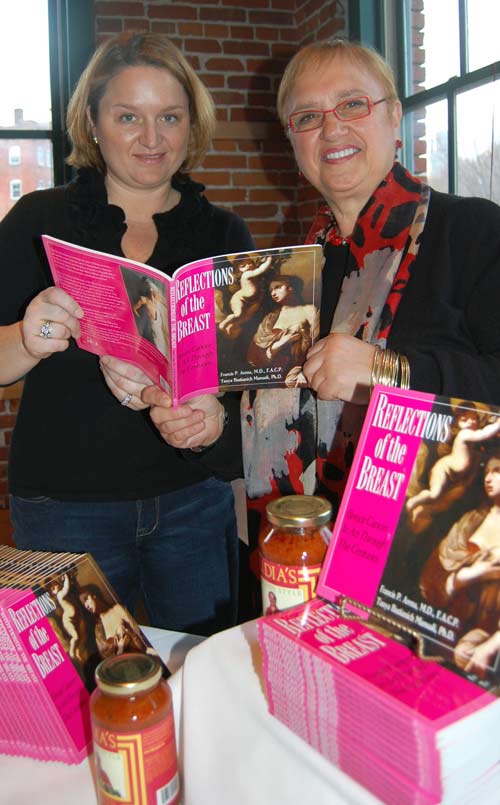 Art has often been held up as a mirror of society’s woes, including the tragic disease of breast cancer. For Dr. Francis Arena, a medical doctor with a specialty in breast cancer, and Dr. Tanya Bastianich Manuali, an art historian with a focus on the Italian Renaissance, the exploration of breast cancer can be found in art.

In the introduction of Reflections of the Breast: Breast Cancer in Art Through the Ages, the co-authors write, “It should be of no wonder to consider that artists were aware of this demon potentially lurking within the female breast as well as they were aware of the breast’s beauty. … Each piece of art is a time capsule snap shot of what was the human experience of that time.”

In a special event on behalf of the St. Luke’s Center for Breast Care, Manuali came to the Kansas City restaurant owned by her mother Lidia Bastianich and shared the art message. That message starts with an Egyptian papyrus that offered a case about a breast cancer patient with significant tumors. She also shared information about votives discovered in ancient Roman ruins that are shaped like breasts. The votives were placed in the Temple of Aesculapius. Even the Greek historian Herodotus claimed that Persian physician Democedes cured the wife of Persian King Darius of breast cancer.

“I am a social art historian. Every work and every reinterpretation has its author. That author responds to cultural influences at his historical moment in creating an artwork. We look at the world shared among members of a social station or class situation,” she says. “I look for the situation of the painting or sculpture and then look for the writing.”

Manuali moved to the female saints, especially the story of Saint Agatha and the many Renaissance images of her mutilation. Several of the Italian painters, such as Sebastian del Piombo, painted Saint Agatha and her martyrdom. The story goes that her denial of a Roman prefect ended with her breasts being removed. Agatha now serves as patron saint of breast cancer.

Arena and Manuali also looked at some royalty, whose lives were solidly documented. Empress Theodora, wife of Emperor Justinian of the Byzantine Empire, rose from the sordid life of a promiscuous actress to wool spinner to empress. Historians tout her intelligence and her support of women’s rights. Twenty years into her reign, she most likely was diagnosed with breast cancer. The physician Aetius wrote extensively about obstetrics and gynecology. His treatment would include the removal of all diseased tissue.

“It is interesting that the disease and diagnosis of breast cancer … none of this is new,” Manuali says. “In fact, fragments of the truth are seen for thousands of years.” 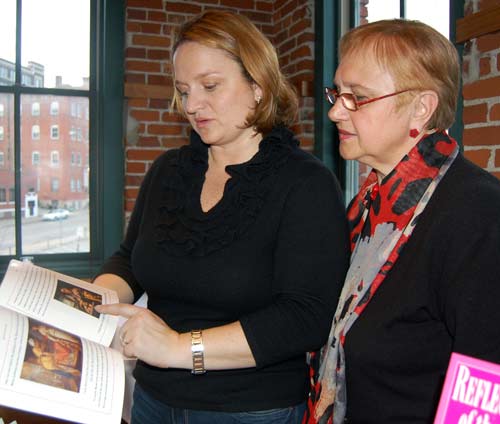 In the book, the co-authors write about Michelangelo’s sculpture, Night, as part of the Church of San Lorenzo, which caught the eye of an American medical oncologist, James Stark, who thought the left breast of the sculpture appeared to represent breast cancer. Another contemporary physician T.C. Greco vacationed in Paris and stood in front of Rembrandt’s painting, Bathsheba’s Bath, in the Lourve. He noticed the left breast showed signs of breast cancer. The reported model, Rembrandt’s mistress Hendrickje Stoffels, died after “a long illness” with the supposition that she died from breast cancer. During the Renaissance and the Baroque periods, more and more painters and sculptors found an interest in anatomy, along with physicians and teachers.

Anne of Austria, wife of Louis XIII, bore two sons. Her eldest became the Sun King, Louis the XIV in 1643. He inherited the throne as a four-year-old boy so Anne served as regent. For a time, she was happy. However, extensive diaries chronicle her decline and death to breast cancer in 1666. The co-authors document the rise of hysteria during the Victorian era even as more anatomical studies were being compiled. With the turn of the century and the movement into the 21st century, the co-authors show women who have beaten breast cancer.

“The next step in the story is to have no more images of breast cancer,” she says.

Manuali studied Italian Renaissance art and received her doctorate. She taught art history in Florence. About a year ago, her son and Arena’s were in school together. They talked about the Egyptian papyrus and were amazed at what the earliest healers said. “The art world reflects the trends of each era,” she says. “We started noticing what others had not. We approached beautiful images with a different set of eyes. With the book, Reflections of the Breast: Breast Cancer in Art Through the Ages, we hope we can reach people. Perhaps through a more educational and artistic view, breast cancer might be easier to discuss. The book really examines a story of hope and that women are survivors.”