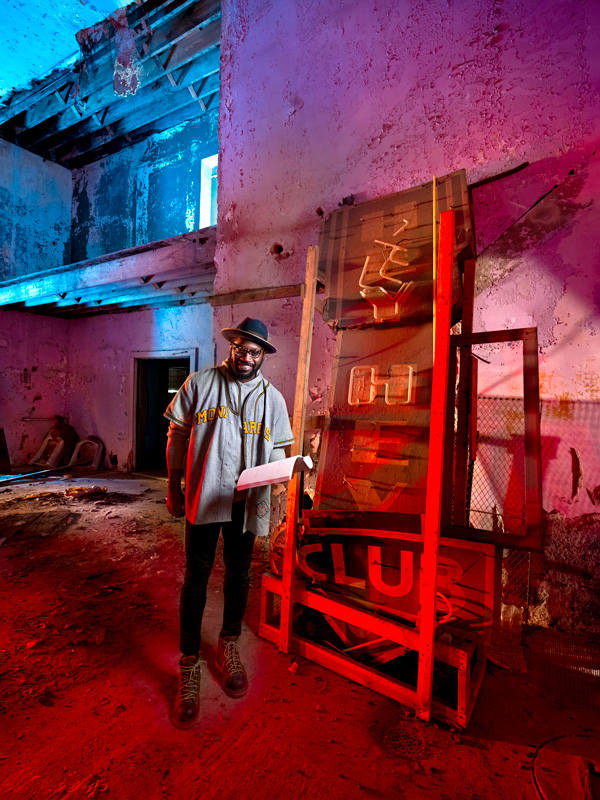 Fox 4 News film critic Shawn Edwards inside the Boone Theatre in the 18th and Vine Historic Jazz District, where he discovered a prop from Robert Altman’s 1995 movie “Kansas City.” Edwards is part of the team restoring the historic theater into a production facility and event space. (photo by Jim Barcus)

Rarely in film do we see Black people fall in love, and when the topic does arise, it is often represented in a toxic way. There is a stigma that Black men cheat and aren’t loyal and that Black women are constantly abused in relationships. Movies often disclude or misrepresent the unique value of Black love.

“If you study the history of film, one of the things that’s been misrepresented is how Black people fall in love. How we demonstrate our love for each other,” says award-winning film critic Shawn Edwards, well-known from his “Screening Room” segment that has aired on Fox 4 (WDAF-TV) News for the past 20 years.

Edwards’ observations exemplify the new era of #BlackVoicesMatter and its battle against systemic racism. In the film industry, that means a push to dismantle the persistent stereotypes, prejudices and under-recognition Black actors and screenwriters face. For most, this movement seems new, but for Edwards these issues are a lifelong passion.

His path to activism began in the 1990s during his student years at the elite HBCU Morehouse College, where he had a column that covered such controversial topics as why African Americans shouldn’t celebrate Independence Day, and why the use of the N-word is offensive. The values instilled in him by Morehouse continue to shape his career and work.

Today, Edwards is among the country’s top African American film critics. Co-founder of the African American Film Critics Association in 2003, he has produced, written and directed four documentaries about Black film.

Edwards is also an award-winning journalist. He won Best Feature for TV and Best Online Film Critic at the 2020 National Entertainment Journalism Awards. Currently he is producing movies in theaters as Senior Marketing Specialist for Hidden Empire Film Group and is at work on a book celebrating 100 years of Black film.

Edwards’ advocacy has been key to elevating the profile of Black film within American culture. Omission was a powerful motivation, including the American Film Institute’s list of 100 Best Movies Ever. Midway into the first decade of the 21st century, Edwards was struck by the fact that there were no Black films on the list.

“Every single film mentioned was not a film I grew up watching, which is so disappointing,” he said in a recent Zoom interview. “This list does not represent the totality of how people watch movies, especially people of color. I always wanted to create my own list.”

At the time, Fox 4 was struggling to find something that resonated with the Black viewership. Edwards saw this as an opportunity to compile a list of 100 of the best Black movies for Black History Month and began creating documentaries highlighting Black accomplishments in film.

“These (documentaries) were way ahead of the curve, he said. “Ten years before George Floyd, years before #OscarsSoWhite, it predated a lot of that.”

“Right Place at the Right Time”

Edwards grew up in Kansas City and spent his early childhood creating comic strips. He credits his early love of film and filmmaking to his mother.

“My mom was real instrumental in taking me to the library. I would check out a bunch of books on how to make movies and ended up buying a Super 8mm camera and buying a cartridge of film,” Edwards said. “I was writing a story and making it come to life with an 8mm camera, three minutes at a time.”

Edwards’ trajectory toward success continued in high school at Lincoln College Preparatory Academy, where he was able to take a television production class at American CableVision, right down the street from the school.

Lincoln College Preparatory Academy “opened a lot of possibilities and a lot of doors,” Edwards said.

The class allowed him access to a plethora of video equipment, which he used to his advantage. Throughout his high school career, he created numerous mockumentaries and short films. Edwards went on to compete in the NAACP’s Act-So academic program. His work was finally getting the recognition it deserved at these competitions.

“It’s funny, the best movie I ever made as a student didn’t even place,” he said. “The judges actually said it was so good they didn’t think I did the film on my own.”

When Edwards entered Morehouse, the film and music scene was on the rise. Spike Lee was producing his early film “School Days” on the set of the college. Edwards became an extra on the set and got to work closely with and learn from an artist who went on to become one of the industry’s most famous Black screenwriters and producers.

“Life back then was so much fun,” Edwards recalled. “You shoot a couple of scenes for “School Days” and hang out with Spike Lee, then go back and shoot some stuff on your own; you hang out with these rappers who later in life become Outkast. You could just feel free to create.”

At the age of 22, Edwards returned to KC to finish his degree at the University of Missouri-Kansas City and had an internship at “The Pitch KC.”

Edwards credits the beginning of “The Screening Room” on Fox 4 to “luck and being in the right place at the right time,” after a producer saw his work in “The Pitch” and reached out. “It became something over time,” he said. “It was all by an accident.”

On Feb. 2, the Critics Choice Association presented its third annual Celebration of Black Cinema. It recognized “the great year of Black cinema that 2020 was all throughout Black History Month,” Edwards said. High-profile Black artists such as Zendaya, John Legend, Taraji P. Henson and Delroy Lindo participated in the event, which was available on all Nexstar platforms.

Movies have been a lifeline during the COVID-19 pandemic. While we are doing our best to return to normal, movies have risen in popularity to pass the time and give us something to look forward to. For Shawn Edwards, movies have been not only been his passion, but a platform for social change.