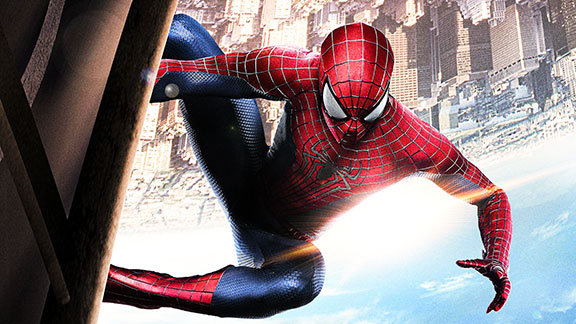 Back in 2012, audiences were sort of thrilled to receive the newest incarnation of our favorite neighborhood arachnid onto the big screen with Marc Webb’s “The Amazing Spider-Man.” Critics were a little rough on the film overall, while, for the most part, audiences seemed to enjoy the newest incarnation. However, two things were very clear. First … nearly everyone, in a moment of Zen-like spiritual awakening and connectivity across the world asked “Why do we need another remake only 10 years after Sam Raimi’s adequate attempt?” and, after viewing the film, “Wow, this Andrew Garfield kid is flipping wonderful as Spider-man!”

Well friends, gladly I can say that yes indeed he is still wonderful. Amazing in fact. Perfect casting to play Peter Parker, the traumatized young man trying to balance a normal existence of school work and family while spending his evenings risking life and limb, fighting crime throughout the city of New York. Honestly, I cannot say enough about him. Garfield is Spider-Man. The heroic character I grew up reading about every month in the pages of “The Amazing Spider-man,” “Spider-Man,” “The Spectacular Spider-Man” and so on – yeah, he’s that guy. The wise-cracking, conflicted, confused hero trying to live up to his Uncle Ben’s mantra of “with great power comes great responsibility.” 100 percent yes.

Now … take that enthusiasm, that positivity for Garfield and mix it with Emma Stone’s Gwen Stacy and you get some of the sweetest, most genuine, believable and electric chemistry two young performers have had on film in quite a long time. To be honest, I wasn’t a big fan of the relationship side bar from the first film. Teen angst just isn’t my cup of tea. But here … Here we get two people, two lovers who seemingly seriously care for one another with drama, that while rooted in comic book ridiculousness seems real. Seems important. Seems like something I could relate to. Other superhero films take note – this is how you do relationship building. This is how you get some pulpy, emotional responses from your two lead characters. This is how you raise the bar.

And then, then you throw in Sally Field’s Aunt May. Yes please! Peter and Gwen, May and Peter. Yes, yes and more yes. Excellent.

Yet, and sadly, they were not the only part of this film that we have to consider. Unfortunately, nearly every part of the rest of the film never matches their greatness and thus, what could have been the epic hero adventure/human interest combo, falls to average because of two very strong, very important, near fatal flaws – the villains and the story.

Let’s continue with more of the good though:
I’ve already gone a little in depth about Garfield and Stone, as well as a little about Field, however, this film would not be a superhero film without action and boy does this film rev it up. One of my main criticisms from the first “Amazing” film, this movie does an excellent job showcasing Spider-man’s abilities, intelligence and overall badassedness (if that is even a word.) “The Amazing Spider-man 2,” in my opinion, is the best representation of Spider-man we have every received on film. This is true for both masked and unmasked. While the special effects do at times get a little muddy, overall the fight scenes are handled extremely well with big choreographed effects that keep you engrossed and wanting more.

At the same time, while I think the character overall was mishandled, Electro’s effects are perfect, big-budget, summer movie eye candy. Honestly, I was skeptical when I saw early make-up photos releases on fan sites. However, I think that, as a character with these powers, he is wonderful to look at and the fight scenes between he and Spidey are a ton of fun.

Now … let’s talk about the bad:
The villains. Horrible. Laughably represented poorly throughout most of the film with little or no motivation, the villains are nothing more than retreads of other bad villains. Sadly, the relationship between Dane DeHaan’s Harry Osbourne and Jaime Foxx’s Electro is the exact same as Topher Grace’s Venom and Thomas Haden Church’s Sandman from the excruciatingly disappointing “Spider-Man 3” with the action culminating nearly beat for beat in the exact same way as that film did. Ridiculous. There are nine writing credits on this film. Nine. Nine people allowed director Marc Webb to remake the third act of “Spider-Man 3” and all of them are still getting a paycheck. Again I say ridiculous.

But let’s back up. Fox’s character, Max Dillon, is nothing more than a combination of Halle Berry’s Patience Phillips from “Catwoman” and Jim Carrey’s Dr. Edward Nygma from “Batman Forever.” Two films not remembered for their extraordinary character development. Dillon’s character score and home even resemble the Riddler’s from “Batman Forever.” Stereotypical and left to just be a sidebar, if allowed, Fox could have been awesome. When his powers fully come into play, Fox delivers his lines with confidence and menace that is fantastic to watch – however, with poor dialogue and no motivation, I found myself asking, “what, why?” Yes he’s obsessed, and yes he is conflicted with social issues, but that does not equal “kill everyone” crazy. As a character, he is treated like nothing more than Frankenstein’s monster and thus never given the proper time to develop or be as good as he could have been.

Along with that, Harry Osbourne. Nothing more than a spoiled brat with a medical condition. There are glimpses of good character development, but in the end, just like his relationship with Electro, it seems his character traits were lifted straight from Tobey Maguire’s emo Peter from “Spider-Man 3.” Couple that with his “transformation” into the Green Goblin and you just shake your head and ask “why?”

I won’t even get into the silliness that was Paul Giamatti’s Aleksei Sytsevich … a.k.a. the Rhino.

Of course, everything is based on the story, and centrally, you have this extremely heart-warming relationship between Peter and Gwen, but all of that is diverted, several times throughout this film (and the last) to focus on this stupid conspiracy that involves Peter’s dead parents and Oscorp. Nobody cares. It sidetracks all the good stuff in the film so much that it completely negates one of the finest scenes in the film that involves Peter, Aunt May and a ton of emotion. Is this a super hero film? Yes it is. Should there be some ridiculousness? Possibly, but when you compare the excellent work that three cast members are putting in as well as the larger than life action that the special effects team is developing, we have to be allowed to expect more from the stories that are being told. For me, this film’s overall story arc feels forced and recycled from past, unsuccessful films.

Overall:
With everything I’ve stated, this film is still entertaining. I don’t think it’s fair to compare this movie and “Captain America: The Winter Soldier” since, while they are both superhero stories, they are very different takes on film genres – I will say that “The Amazing Spider-Man 2” is far better than it’s predecessor “The Amazing Spider-Man.” Held firmly together by it’s two leads, I was 100 percent engrossed by their relationship. At the same time, the action and special effects kept me engaged and will keep audiences shoving delicious, buttery popped balls of corn into their mouths all summer long. However, all of that goodness is unbalanced with silly villain characterization and an inadequate story arc that never allows other characters to truly develop or be as good as they could be.

This film will make a lot of money this summer season. That much is clear. It is a perfect distraction for adults and kids (of a certain age) to enjoy, however, like other less than average recent releases like “Divergent,” it is clear that audiences need more from their heroes and while Spider-Man can always draw a crowd, if he has nothing to say or do, the crowd will quickly move on … which at the end of this month includes a team of mutant super heroes and a giant lizard from the East.