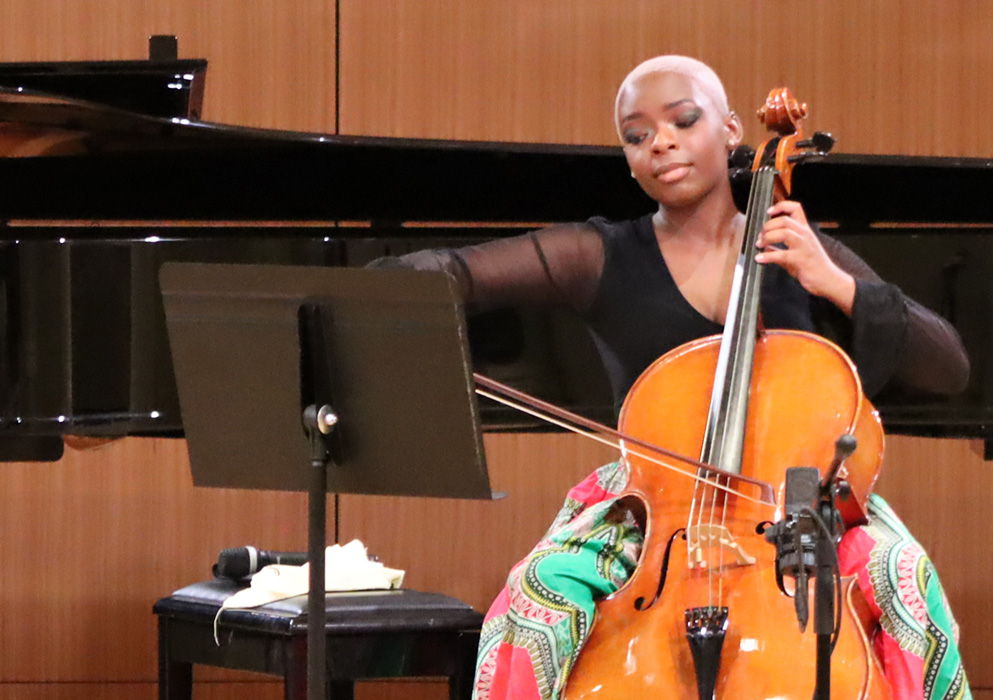 Mstislav Rostropovich once said, “When I started learning the cello, I fell in love with the instrument because it seemed like a voice — my voice.”

It’s the voice-like characteristic of the cello that makes it one of the most heart-melting of instruments. Over the years, the Harriman-Jewell Series has presented some of the world’s greatest cellists in Kansas City, from legends like Rostropovich to rising stars like the young American Ifetayo Ali-Landing.

Clark Morris, executive and artistic director of the Harriman-Jewell Series, notes that while piano and violin recitals are more common, the cello also makes a commanding recital instrument.

“There’s such a warmth and beauty that comes from the cello, particularly when it’s in the skilled hands of amazing cellists like we’ve been able to bring,” Morris said. “It doesn’t need an orchestra backing it up to be appreciated. In some ways, stripping it down to a recital with just a piano, or sometimes even just a solo cello, you have an even greater appreciation for the beauty that comes from that instrument.”

“Richard said that it was almost as if the fever propelled him — it was a fiery performance and the audience went crazy for it,” Morris said.

Yo-Yo Ma, perhaps the world’s best-known cellist, has made 10 appearances on the Harriman-Jewell Series. Ma is one of those unique classical performers who is able to reach audiences beyond the world of classical music.

“I would say that he is unique among humans,” Morris said. “There are very few people like him during your lifetime. He has a charismatic personality, and that flows into his playing. You just feel honored to be in the same room with him.”

Ma is also well known for his acts of kindness and generosity. Morris recalled one such moment.

“After maybe the fifth or sixth time we presented Yo-Yo Ma, we arranged a session with children from a school for the blind,” Morris said. “He let them touch his cello while he played so they could get a sensory appreciation for his playing. He was just so warm and loving, as though his only purpose for coming to Kansas City was to share music with these children. And he insisted that we not take pictures or have any publicity about it. I’m sure there are a thousand stories like that about Yo-Yo Ma.”

The Harriman-Jewell Series continues to nurture new generations of cello artists, such as 18-year-old Ifetayo Ali-Landing, who performed in October for the Series’ first livestream concert.

“It was a great success,” Morris said. “And she was the right artist to do it. Ifetayo is a beautiful musician and her personality is magnetic. That really comes across in her playing. Being able to see her live was stunning. Combined with the question-and-answer session, people were able to get a sense of the depth of her personality and how fun she is.” Go to hjseries.org to watch the full concert by cellist Ifetayo Ali-Landing and pianist Evangelos Spanos.

Another rising cello star is Sheku Kanneh-Mason. Mason won the 2016 BBC Young Musician award and also played at the royal wedding of Prince Harry and Meghan Markle in 2018. Sheku and his sister, pianist Isata Kanneh-Mason, were originally scheduled to perform on the Harriman-Jewell Series in December 2020 but were forced to cancel because of a snowstorm.

“That was crazy,” Morris said. “He literally has millions of people following him online, and he’s become a huge sensation, so we had a lot of interest in that concert. The great thing is we’re bringing him and his sister back in 2022. With Sheku’s enthusiastic audiences, it’s going to be fun.”

For more information about the Harriman-Jewell Series and its upcoming performances, call 816-415-5025 or visit hjseries.org.