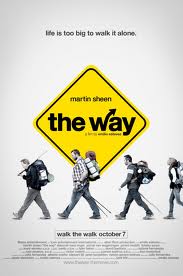 The Way is about how we can all make changes in our lives with four main characters that all have different reasons for making this multi-century 700- kilometer Christian pilgrimage on the Camino de Santiago. It’s about the relationship between a father and his son, a woman who wants to quit smoking, a man suffering from writer’s block and an overweight man who desperately wants to lose weight, but eats his way through Spanish villages and over lofty mountain paths. Each is propelled by their own unique imperfections, to seek a better way and finish at the end of their pilgrimage somehow enlightened.

Emilio is a genius storyteller that holds your attention from the beginning until the end of this film. The cinematography is breathtaking and the first ever footage inside the Cathedral of Santiago de Compostela (Saint James) in Galicia, Spain also known as the Way of St. James, is unforgettable. The Way is a true inspiration that gives each of us pause to ask if we’re doing all that we can, here and now.

If you didn’t read my personal interviews in September in Art-Seen on KC Studio’s website with Emilio, Martin and David, I would encourage you to do so HERE. It sheds a lot of light on the intent and over-arching message as to why Emilio wrote The Way and why Emilio knows that this is the best film his father has been in since Apocalypse Now. Run as fast as you can to see this film, it’s everything they say it is and more. I will leave you with what Martin said to me, “Think about the journey.”