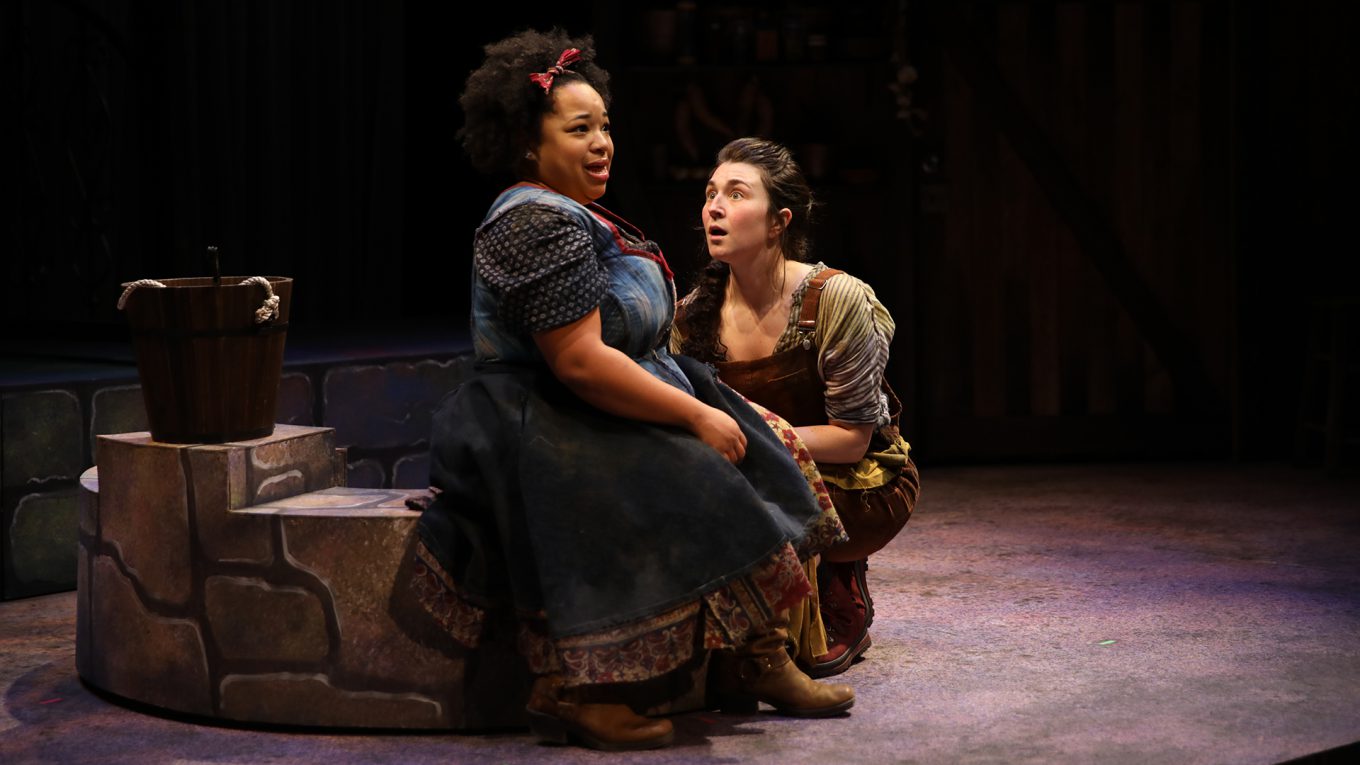 Since most art is meant to reflect life, it was always inevitable that much of the art produced during this crisis we’re all currently living through would be themed around pandemics, plagues, quarantines, and the like. Audiences’ hunger/tolerance for these sorts of works vary widely based on the individual—some of us find it cathartic while plenty of people are happy to have their art reflect a bit less of their actual pandemic life. Of course, that reaction also varies based on the material being presented.

“Our Black Death,” which is having its world premiere at the Unicorn, is a cute, if ultimately fairly unexceptional entry in the pandemic oeuvre. Set against a deliberately anachronistic backdrop of a medieval plague, centered on two women longing to be together and then grappling with what that desire means once it becomes reality, this play is an engaging bit of entertainment, so long as one doesn’t insist on thinking too hard about some of the deeper implications.

Bit and Frol are two peasants living at a time when peasants don’t live very long under the best of circumstances. And at the moment, there currently happens to be a plague ravaging their village, taking the lives of everyone around them, with no regard for class hierarchies. Frol’s husband is taken by the disease and Bit’s—well, Bit’s husband was likely going to get sick eventually and die just like everyone else, so Frol just sped things up a little.

Frol’s struggles with jealousy over Bit’s new friendship with a hyper-plague-phobic nobleman and her need to be the center (really the entirety) of Bit’s world are interwoven with a B-plot involving her friend, a witch, trying and failing to wrangle her crush into being her perfect man via a series of spells. The latter relationship is played for laughs but mirrors Frol’s own possessiveness and manipulative tendencies.

The first hour or so of Lindsay Carpenter’s 90-minute play is an intriguing set-up for a story with quite a lot of potential—especially when, in a play driven by fourth-wall-breaking monologues, the narrative begins to shift in terms of whose story it is that we’re watching. This quirky, irreverent love story wants to take on heavier ideas, like where the lines are drawn between love and obsession, between and jealousy and abuse. Those ideas, unfortunately, end up being too big for this particular show to know how to tackle.

Ultimately, Carpenter is unable to drive her story forward and the last third of the play ends up being a series of repetitive arguments, a bizarre duel, and a lack of any sort of real accountability for a number of characters who desperately need it.

The highlight of this show is, hands down, the stellar performances from its cast. Elise Poehling does a fine job anchoring the show as Frol and as Bit, Shon Ruffin has an innocence that teeters on pure naivety but ends up informing a much fuller character. As the unnamed “Nobleman,” Sam Cordes does the absolute most with a role that keeps him confined to a small corner of the stage. And Justin Barron is hilarious as the “Man” being manipulated by the Lovesick Lady’s (Manon Halliburton) string of spells, though his entire plotline could have benefitted from far more depth and a more satisfying resolution.

“Our Black Death” is not up to the weightier themes it sets out for itself, but as a brief installment in our current era of pandemic art, it at least attempts to depict darkness with a sense of levity, and that’s worth something.