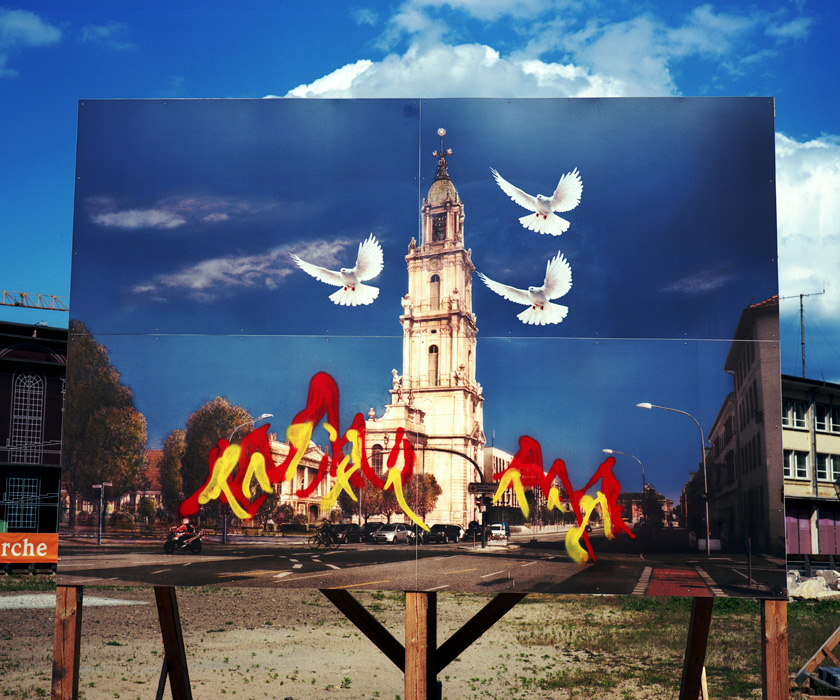 Unlike painting, drawing and other traditional forms of art, photography’s evolution is tied to its technology and its role in society outside of art. The overwhelming presence of screens in public and private spaces, the ubiquity of the cell phone camera and the rapid reproduction and distribution of images via the internet have altered people’s relationship with the image.

Today, the image is disposable yet permanent — easily dismissed on social media yet in-erasable from the internet at large. It shifts between being a pictorial record of a time or place and a type of colloquial language, where images are used to communicate opinions as well as identity. The influence of the meme — a unit of cultural meaning passed from person to person — has made the manipulation of the image accessible and commonplace. How are contemporary photographers affected by this cultural condition of the image? And, in what ways are they challenging the medium of photography within the contemporary arts landscape?

For the five Kansas City-based artists whose work is reproduced in these pages, photography is a mode of consciousness, a process, a way of experiencing and translating the world.

Patricia Bordallo Dibildox transforms material, such as bubble wrap and velvet, by pushing the limits of digital photography, experimenting with scanners, screens and camera phones. She intentionally pairs textured materials with images or text to emphasize the fluidity in language and communication, playing with semiotics and perception through a feminist lens. At times, Bordallo Dibildox makes the photograph into an object through printing on utilitarian materials such as vinyl, acknowledging the role photography occupies in daily life.

Similarly, Brandon Forrest Frederick finds the beauty, the humor and the absurd in the everyday, and emphasizes people’s relationships with objects. He marries material to image, and reinterprets the photograph into an object, such as “Always Support From The Bottom” (2017), a printed high-resolution image of the bottom of a tray on fabric that Frederick crafted into a seemingly functional object, a hammock. Frederick creates images based on objects and objects based on images, in hopes of slowing down the viewer into a contemplative and reflective state that asks the viewer to look closer and more critically.

In “The World Outside and The Pictures in my Head” (2016), Judith G. Levy extracts scenes from noir and World War II films, merging multiple images into new, seamlessly composite photographs that articulate a personal, queer gaze. Using her camera phone, Levy takes photographs of these films playing through a screen, then carefully blends them together digitally and prints them on archival paper. Through this iterative process, the artist jumps from screen to screen to screen, and produces pristine printed objects that will survive beyond their digital counterpart. Levy not only confronts the heteronormative lens of media, but also proposes the permanence of the queer experience while exploring the influence of these films during her childhood and adolescence.

Silvia Beatriz Abisaab investigates the visibility of People of Color in post-9/11 America by capturing their essence with dignity, compassion and a sharp compositional lens. She works intimately with her subjects and uses her lens to create sincere and empowering portraitures. In “Nic Ortega” (2016) from the “Latinxs in KCMO series,” Abisaab obtains an innocuous pose of her subject’s arms, covered in vibrant tattoos, omitting their face from the photograph. Her thoughtful consideration of color and framing focus on the implied history and experience of this individual, and redefine beauty and strength through the lens of resilience.

William Toney documents the world around him and memorializes the everyday objects associated with his personal experience as an African American male. He photographs and collects found objects, staging still lifes that communicate a cultural narrative to be discovered and dissected by the viewer. His shrine-like compositions embody the power and vulnerability of the Black experience, and through color, emphasize the joy found in the mundane. Toney pinpoints the inherently human characteristics and idiosyncrasies found in the spaces we inhabit and objects we interact with, identifying and honoring shared experiences and narratives.

Lynnette Miranda is a Latinx curator, organizer and writer from Miami, Fla., and is currently the 2016-2017 Curator in Residence at Charlotte Street Foundation. Previously, she was the Summit Coordinator at Creative Time, where she worked on “The Creative Time Summit: The Curriculum” at the Venice Biennale in 2015.