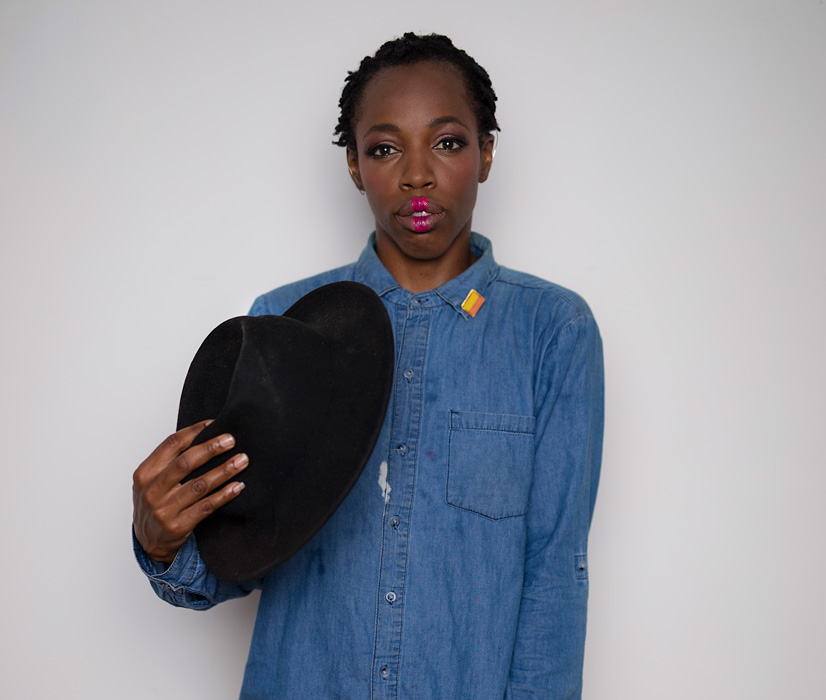 If you have seen Cat Mahari perform, you don’t forget. True to her name, she moves with a fierce feline swagger. Her presence in a room can be equivalent to a mic drop. Fearless? Yes. Challenging? Definitely. Mahari is a battle-tested warrior. When she roars her truth you will pay attention. Her confidence is grounded in lived, embodied experience and intense study. It comes through her work as “centering blackness.” Mahari’s practice-as-research process reclaims agency through African and African-American social, political and cultural forms.

Mahari’s performative, multi-media work asks big, difficult questions about human violence and injustice while seeking out creative, critical responses. She takes two to three years to conduct research, discover connections across time, across cultures, across artistic media, but her work remains rooted in the experience of living within blackness. When artists say, “my work speaks for itself,” it can often be a cop-out to communicating with the audience. Mahari’s community-facing, collaborative performance works literally speak for themselves. They also might invite you to dance, have a snack or punch you in the gut — in a good way.

Earlier this year Mahari received a Charlotte Street Generative Performing Artist Award as well as a Mid-America Arts Alliance Artistic Innovations grant. She plowed her resources right into one of her new projects, 31st&Brklyn, a new space on Kansas City’s east side dedicated to cultivating community and performance art by artists of color.

Under Mahari’s direction, 31st&Brklyn announced six associate artists (herself included) based in Kansas City, St. Louis and New Orleans, who are developing two-year projects. Mahari refers to their space as a “quilombo,” a term from Brazil that means an independent settlement by people of African origin, historically, escaped slaves, as a means of active resistance against colonial slavery.

From dancer to “choreopolitical performance artist”

Mahari is cagey about her origins. She claims not to have spoken until she was six. She left home at the tender age of 14 to create herself. An autodidact in the extreme, she taught herself to read, and to play the piano and trumpet. Her dance style is as mercurial as it is seemingly effortless.

Mahari has moved through practically every sphere of the dance world, from street dance crews to ballet, modern and contemporary dance companies. Not to mention her years of boxing and tai chi training. Her ability to fluidly combine dance genres as both performer and choreographer indicates how deeply she has absorbed their histories and techniques of movement. Eventually Mahari brought her talents to Kansas City to attend the Conservatory of Music and Dance at UMKC, earning her B.F.A. in dance performance.

After graduation, new opportunities beckoned: study at the Merce Cunningham Dance Company in New York, an international scholarship to London, professional training with Ballet Black at the Royal Opera House, and a Master’s degree program at the Royal Central School of Speech and Drama in Performance, Practice, and Research. There, she was influenced by the theories of unorthodox philosopher Slavoj Žižek, on confronting the problem of violence and what to do about it. Also inspired by the work of William Pope.L, she emerged as a full-blown “choreopolitical performance artist” with her solo work, “Violent/Break, Vol I, Violence in a Contemporary Choreographic Practice.”

Mahari premiered “Violent/Break, Vol I” at London’s Brink Festival and went on to perform the work in Romania and Canada. Over the course of several rounds, punctuated by the clang-clang-clang of a boxing bell, Mahari bobs, weaves and punches through a theatrical performance monologue with measured doses of rage, humor and autobiography. Between dance breaks and video clips she fumes with frustration over the violence of Eurocentric frameworks, shares glimpses of family relations, and laughs at the down-to-earth realities of rent, taxes, health care and education.

Near the end of the performance, Mahari transitions from a hip hop dance break to channeling her inner Nina Simone — closing with an emotional rendition of the hymn “Amazing Grace.” Yes, she can sing too, and has recorded a couple of EPs in Europe. As a response to the constant violence of visible and invisible racism, Mahari’s performance found its voice, its movement, in the social, political and cultural construction of blackness, a sovereign space of communication.

Back in Kansas City, by way of New York, Chicago and St. Louis, Mahari has continued her research at 31st&Brklyn. It was there that she co-created “The Floor,” what Mahari called her very first immersive multi-media piece. Collaborating with music, theater and visual artists, they traced post-World War I black migration through dance, storytelling and food sharing. In a community-based “steppers night,” Mahari, along with Rasheedat Badejo, Aaron Sutton and Eric Person, led a celebration of African American two-step partner dancing, which she considers an avant-garde discipline. Urban centers, including Kansas City, Detroit, Houston, Chicago, St. Louis and Philadelphia, each developed their own unique stepping styles. This work was designed to travel to these cities to engage local traditions and generate new experiences.

Based in the African form of call and response, “The Floor” summoned oral histories, folkways and lifeways of African American people into an immersive transmedia experience. By calling local participants to the dance floor they created a social space for shared culture and knowledge, a work to counter what Mahari called “an abyss of ignorance” about the evolution and transmission of Black culture in America. Mahari’s floor also suggests the lowermost position, the ground, the supporting surface, an activated common space, that is to say, where the action is.

Seeking a place of shared humanity

Two years in the making, “B-BAM! Expectations of Violence/Rites Due Spring” is another recent collaboration key to understanding Mahari’s work. During her second stint in the Charlotte Street Foundation’s Urban Culture Project Studio Residency Program, she worked with jazz trumpeter and bandleader Hermon Mehari (no relation) to collectively develop choreography, music and multi-media for a performance inspired by the synchronicity of two historical anniversaries: 50 years since the March on Washington for Jobs and Freedom, and 100 years since Igor Stravinsky’s riotous Paris premiere of his ballet “The Rite of Spring.”

What the two events had in common was their assertion of human rights, artistic expression, and the (false) expectation that there would be violence. Mahari and collaborators brought this down to the local level, asking how violence and the threats of it, in all its forms, related to the lived experience of blackness in Kansas City specifically. They tapped into the Black Archives of Mid-America and the Marr Sound Archives at UMKC for historically relevant materials, balanced with current flashpoints of racial violence and the artist’s own experiences.

For the performance, the space was structured to mock corporate diversity trainings. The audience was seated at tables with workbooks, facing two large screens. It was performance/theater designed as participatory workshop. Poet Glenn North gave an opening keynote about the value of the archive, and the importance of black history in the context of current racial violence; what followed was a 45-minute provocation.

Mahari choreographed and performed several dance segments with three male dancers from the Paseo Academy. They moved to the compositions of Hermon Mehari’s jazz quartet, by turns searing and solemn. At one moment they unleashed a primal scream, in another they ground down into writhing pain. They confronted the audience, interrogated them and physically invaded their space with dancers planking on their tables.

As the intensity level of the performance increased, the projection screens shifted from scenes of natural degradation into media clips superimposed with Eric Garner’s tragic last words, “I Can’t Breathe,” as he was killed by a police officer. Mahari delivered a monologue that addressed the reality of racism followed by an extraordinary floorwork breaking solo. “This is not a diatribe! This is not a hate mongering session! This is a period of centering blackness!” she exclaimed.

As in previous works, she pushed to the edge and then brought it back to common denominators, “I eat food, pay rent, just like you.” The remainder of the “B-BAM!” performance afforded equal time for wide-ranging audience questions about artistic process, police relations, personal accountability and the persistence of racism in Kansas City. Engagement with the audience points to the deeper level that Mahari seeks in her work, a place of shared humanity above the divisive thought forms of race, language and power.

What is the transcendental approach to violence? It’s the profound question Mahari explores in her latest work, “Violent/Break, Vol II.” As the next installment in her “solo mixtape series,” Mahari integrates the improvisational street dance moves of krump with the oldest form of tai chi, which she practices, one that translates to “ultimate supreme pugilism.” She and her Associate Artists at 31st&Brklyn presented the four Afrofuturistic performances Oct. 26 through 28, 2017, as a visionary antidote to the current climate of seemingly endless racial conflict.

Though her boundary-pushing work is passionately centered in the reimagination of blackness, Mahari is a humanist tuned into the fragility and suffering of human life. If social lives are constructed (unjustly), her works show us that they can be deconstructed, and then reconstructed through the liberated potential of collaborative performance art. Recently, while practicing tai chi, Mahari confessed to a momentary breakthrough, a fleeting realization of self-love. She’s not there yet, and isn’t sure what it means, but maybe in the next piece she’ll find out.