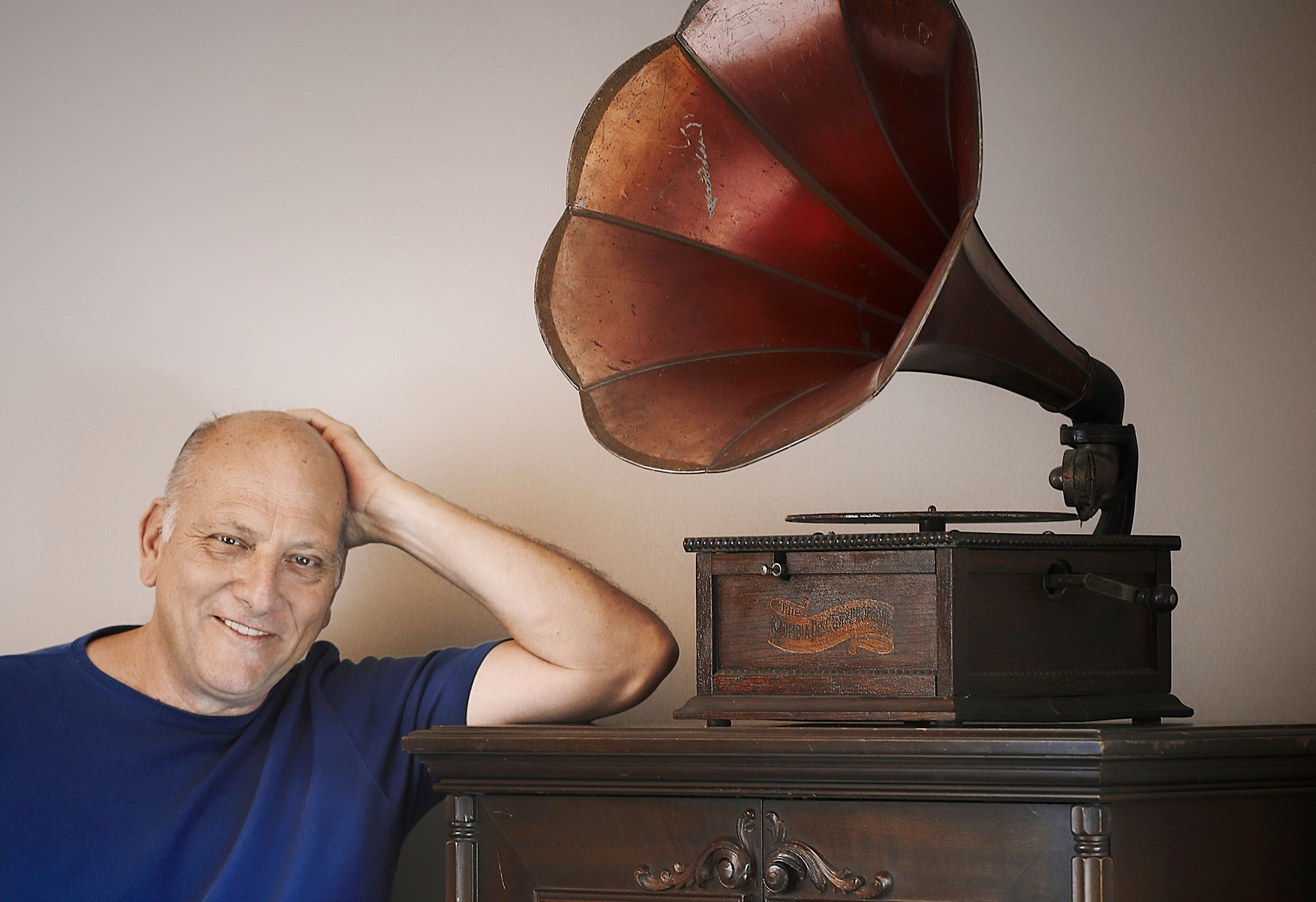 The Author, Educator and Host of KCUR’s Popular “The Fish Fry” Program is a Kansas City Institution in his Own Right

Chuck Haddix loves music. And to judge by the recordings he showcases on his long-running radio program, “The Fish Fry,” he’s clearly well-acquainted with a vast range of sounds along the American musical spectrum — from the haunting blues of Howlin’ Wolf to the fiery bebop of Charlie Parker. And he communicates that enthusiasm with verve.

So, it’s no wonder that the show has earned a loyal and passionate following. On the KCUR airwaves for more than 30 years, Haddix’s “Fish Fry” is as essential to Kansas City culture as fountains, barbecue and jazz.

The show has achieved success, Haddix said recently, through its ability to challenge listeners without losing them.

“I always say that I feature the finest in blues, soul, rhythm ‘n’ blues, jumpin’ jive and zydeco,” he said. “But it’s much broader than that. I’ll feature swing music and field hollers. The common denominator is American music. That’s what I’m all about.”

Which raises the question: With such a rich reservoir of music available to him, how does Haddix decide what to include in a typical “Fish Fry” program?

“It’s all intuitive,” he said. “Every other set, I lead with a new release, and then I’ll play something that I haven’t played for a long time.”

Haddix also keeps busy as director of the Marr Sound Archives, which is housed in the Miller Nichols Library at the University of Missouri-Kansas City and boasts more than 350,000 historic recordings; as an instructor in local jazz history at the Kansas City Art Institute; and as an author whose books include “Kansas City Jazz: From Ragtime to Bebop — A History” (co-written with Frank Driggs) and “Bird: The Life and Music of Charlie Parker.”

But the “Fish Fry” — described on the KCUR website as “a public radio party in your living room” — is arguably his signature achievement. From 8 p.m. to midnight every Friday and Saturday, the program allows listeners to take refuge from increasingly ephemeral pop music and partake of the indelible glories of Americana.

The party got started in 1985, a year after Haddix (who goes by the on-air moniker “Chuck Haddock”) joined the staff of KCUR as a jazz producer.

“I worked in the record business for many years, but there really wasn’t that much of an opportunity to get ahead, and I’ve always loved radio,” Haddix said. “And I wanted to make a parallel career move.”

At first, he wasn’t exactly what KCUR was looking for. The station had an opening — but for someone with a background in classical music.

“That’s not my bag,” he said. Eventually, a slot became available for a jazz producer “three nights a week,” and Haddix signed on.

“I started working for them, doing jazz, in October of 1984,” Haddix said. But percolating in his mind was an idea for a program not limited to just one musical genre.

“There are a lot of jazz factions out there,” he said. “The traditional people don’t want to hear any modern stuff, and I kind of felt like I was being boxed in — particularly by a couple of people who worked at the station. I wanted to break out of that and do something different, and really mix it up.

“So, I put a pitch in to the program director at that time, to do the Fish Fry. I put together a tape — with a little zydeco on it, classic soul, and R&B — and she really liked it. So, they carved out a spot for me on the schedule, which was midnight on Saturday nights.”

“Fish Fry” proved to be so popular, Haddix said, that before long its hours began to be extended and it was broadcast on both Friday and Saturday nights.

But as pleased as Haddix was that the musically eclectic “Fish Fry” had caught on with listeners, the work involved proved to be demanding.

“It’s been a learning process for me,” he said. “Programming so much music, you really have to spend time preparing.” Putting the show together “takes about three-and-a-half to four hours.” Haddix also had to find his way into the role of radio-show host.

“When they hired me, they didn’t really train me — they just kind of threw me in,” he said. “So, I had to learn how to broadcast, and how to do radio.

“In those days, Walt Bodine” — longtime host of a popular KCUR talk show, who died in 2013 — “was on at night, so I would engineer his program. I really learned how to broadcast from Walt Bodine, and how to make people feel welcome. Just sit down and say, ‘Hey, come on in.’”

But why did Haddix decide to call the show “Fish Fry,” which might lead uninitiated listeners to expect cooking lessons?

“I was originally going to call it ‘The Barbecue Hour,’” he said. But he changed his mind when he happened to hear “Saturday Night Fish Fry,” saxophonist Louis Jordan’s jump-blues ode to partying the night away.

In addressing the life and work of another pioneering saxman — Charlie Parker, who was born in Kansas City, Kansas, and has become a bigger-than-life figure — Haddix said that one of the things he set out to do in his book was to stick to the facts. Publishers Weekly praised “Bird: The Life and Music of Charlie Parker” for its “valuable sense of the cross-pollination that occurred in jazz during the ’40s and ’50s, as players brought new musical ideas from coast to coast, or even just block to block.”

The 2013 biography garnered reviews alongside another work that sought to examine Parker and his legacy, Stanley Crouch’s “Kansas City Lightning: The Rise and Times of Charlie Parker.” Through the decades, Parker — who was only 34 when he died in 1955 — has been a difficult artist to pin down.

“The thing about writing about Charlie Parker,” Haddix said, “is that there are so many myths surrounding the man that you have to strip that away. For one thing, I didn’t rely on previous biographies — I approached the book with fresh eyes.”

Magazines and interviews went a long way toward providing insight into Parker’s life as an artist, he said.

“I went through all the ‘Downbeats’ and ‘Metronomes’ I could get my hands on. And I interviewed (bandleader) Oliver Todd, (pianist) Jay McShann and (trumpeter) Step-Buddy Anderson, and others who knew (Parker). It was a real challenging project, but I’m happy with the way it turned out.”

Haddix recalls getting into writing while working at Westport’s much-missed Penny Lane record store in the 1980s.

“We started a little newsletter that we called the Penny Pitch,” he said — which evolved into the weekly ‘Pitch’ alternative newspaper. “It had a jazz column, and you learn to write by writing. When I first started out, I wanted to write so badly — and I did. I look at some of those columns, and I’m like, ‘Oh, man. This is terrible.’”

Although Haddix continues to write, it’s as host of his “Fish Fry” that he’s maintained the highest profile. Indeed, the show has brought him a fair amount of celebrity. His face may not necessarily be familiar — he is, after all, on the radio — but fans invariably know his voice.

“You form a very intimate relationship with your listeners,” he said. “Plus, a lot of the music I play is love songs — and positive songs, rather than ‘I’m gonna murder my baby.’ I’ll play songs about cars, or about trains. Taking the thematic approach gives it a deeper meaning than just going in there playing records.”