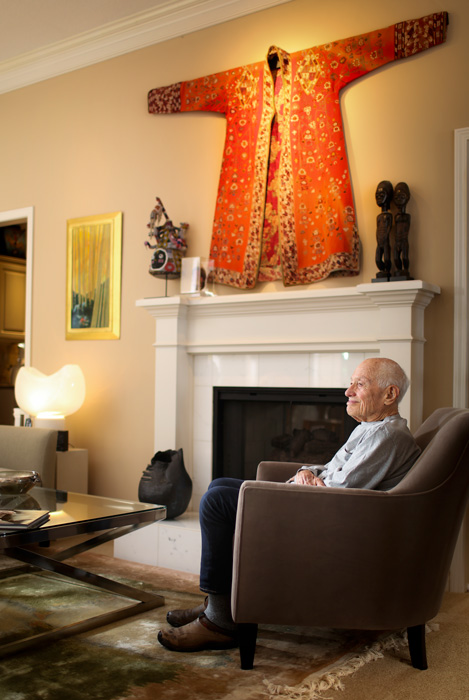 World War II pilot, scuba diver, businessman, photographer, inventor, ceramicist and glass artist. Over a life spanning 90 years, Lee Lyon has been all of these things and more.  He is also the owner of wondrous works from around the globe and a donor of masterworks to the Nelson-Atkins Museum of Art.

But, he is not, he says, a collector.

“Collector is not a good word for me,” Lyon said during an interview at his Overland Park home surrounded by African sculptures, Indonesian textiles, Haitian paintings, and modern and contemporary works by artists including Milton Avery, Dale Chihuly, Helen Frankenthaler and the Russian-born Taos painter, Leon Gaspard.

They are pieces amassed over a lifetime with his late wife, Joanne, who opened one of Aspen, Colorado’s first art galleries. The couple moved there in 1978 after Lyon retired from his family’s cattle-hide processing business at age 54. He turned 91 this year.

“I’m not a collector,” Lyon reiterated, to the bemusement of his son, artist Mike Lyon, who joined him for the interview. “We just began to buy things we liked to hang in the house.”

What sparked your interest in art?

Lee:  In college my roommate took me to the Museum of Modern Art. I’d never seen anything art-wise before. Before I left I bought a print of van Gogh’s Starry Night. I took one art class that introduced me to the painting Guernica, then on display at Harvard’s Fogg Museum.  From then on, an interest in art was always in my head.

Your degree was in economics. When did you start making art?

Lee: I did a lot of photographs before I got married. After I sold my business and we moved to Aspen, I got involved in clay, and then glass. My wife carried glass artists at her gallery and she called Dale Chihuly and got him to let me come up to his Pilchuck Glass School in Washington State. I worked in glass for 15 years or so, making doors and windows and furniture. I built my own glass studio, Spiro Lyon Glass, in Aspen, and hired an assistant, Jacqueline Spiro-Balderson, who took over the business when I returned to KC in 2013.

And when did you start buying art?

Lee: We got involved in pre-Columbian textiles as stuff to have in the house that we liked. We also bought American Indian textiles and beadwork in the late ‘60s and early ‘70s, before they went up in price. Joanne and I were able to travel all over the world— Japan, China, Indonesia, Australia, Europe, Scandinavia— buying work for the gallery.

Tell me about some of the textiles.

Lee:  The long horizontal piece over the bar is called Rites of Passage.  It depicts an Indonesian wedding ceremony and the move from being single to being married. I bought it at an antique shop, and when I opened it up, it was caked with mud on the back. I laid it on the deck and turned the hose on it!  I bought the embroidered coat over the mantle at an Asian art sale in San Francisco. It’s an Uzbek tribes women’s coat, made around 1860.

Mike, is any of your work on display here?

Mike: There’s a big pen and ink drawing, 16 views of Peregrine Honig, over the bed, and a couple of my self-portraits also hang in the bedroom. That’s my dad’s glass sculpture in front of the window, next to a piece by Bertil Vallien, the Swedish glass artist who was the art director of Cosa Boda. My mom was also an artist. She went to the Kansas City Art Institute and was a student of Dale Eldred and Wilbur Niewald.

[block pos=”right”]”The Nelson-Atkins Museum of Art has just accepted a gift of 20-plus American Indian bags that used to hang in our living room in Aspen. They’re interesting to me because they’re asymmetrical in the treatment of color and design.”
—Lee Lyon[/block]

I love the colorful display in the dining room with the big Helen Frankenthaler print and the Haitian painting. And I can’t take my eyes off that expressionist sculpture of the twisting figure.

Lee: The Haitian painting is by Marilene Phipps, a leading artist who also won awards for her poetry. Joanne represented her at the gallery; my interest is in the colors. The painted wood sculpture is by German artist Hans Scheib. He’s having a show in New York and we’re close friends. He’s flying in to see me.

Lee: That’s a Yoruba mask on the mantle, and the pair African figures across from it were made by a Baule artist.

I gave the Nelson-Atkins a lot of the Native American work, including a shirt and leggings worn by Chief Moses and a Southeastern men’s bag. The museum has just accepted a gift of 20-plus beaded bags dating from 1790-1835 that used to hang on a huge wall in our living room in Aspen. They’re interesting to me because they’re asymmetrical in the treatment of color and design.

Mike: The Nelson now has the largest collection of southeastern bags in the country. I took two van loads from Aspen to the Nelson. We didn’t want to ship them. Dad has also just given the Nelson a book. It’s the only time in the last 10 years he literally hopped from foot to foot.

Lee: I saw it on the Internet and loved it. It’s an illuminated book of the Four Gospels dating to c. 1670 by an Armenian artist, Mesrop of Xizan, and it’s totally different from the books of hours done in France and Germany in the late 1400s and 1500s. The Armenian style is more Byzantine.

I bought it to give to the Nelson on the condition that it would first go to England for a show at the Bodleian Library, but the Bodleian gave up the rights to show it when they learned that the cost would be exorbitant to get it over there and back.  When I bought it, the dealer shipped it to me FedEx in a cardboard box, but once it was given to the Nelson, it would have to be hand carried, and they’d have to buy it a seat!