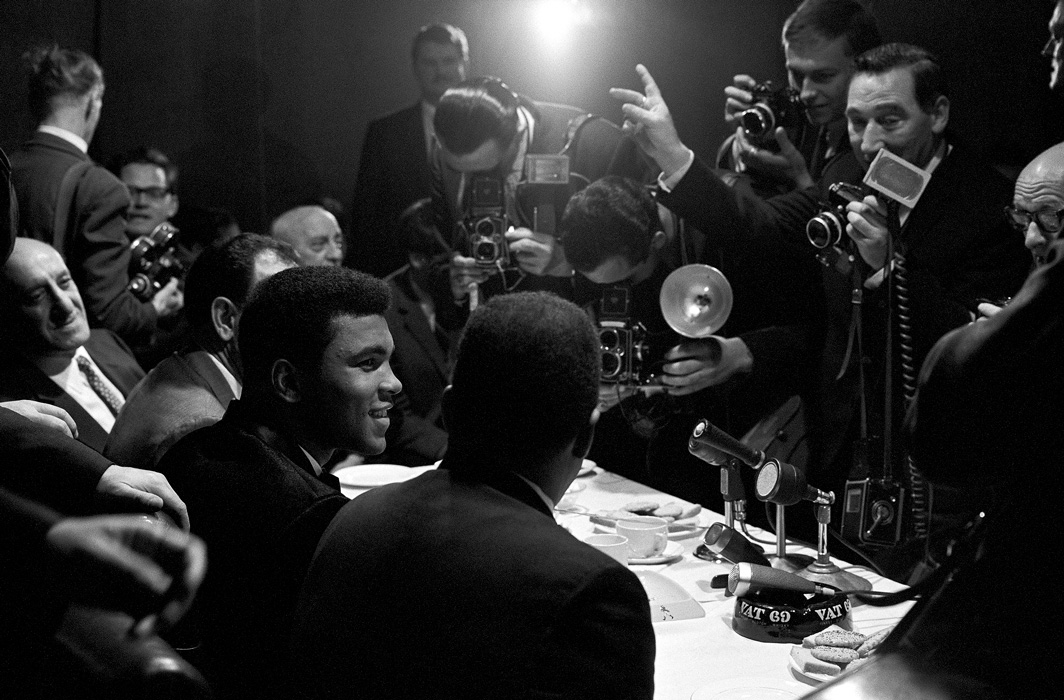 “Already a brilliant fighter, there was hope that he might become a champion everyone could look up to . . . From where I watched and listened, it all seemed so worthwhile.”

When Gordon Parks met Muhammad Ali in May 1966 on assignment for Life magazine, the 53-year-old photographer, writer, composer and film director was at the height of his career. Though working on contract for the magazine by this time, he had served for over a decade as the only black staff photographer at the renowned picture weekly. His poignant photo essays and fashion and entertainment features had made him a familiar name for Life’s vast middle-class readership. Parks had also found success as an author. The Learning Tree (1963), a coming-of-age novel based on his own life experiences growing up in Fort Scott, Kansas, was published to great acclaim, as was his first memoir, A Choice of Weapons (1966). Raised in a poor but loving family, and having faced a lifetime of bigotry, Parks — “born with the stubborn need to be somebody” — had certainly attained his goal.

The 24-year-old heavyweight champion Muhammad Ali, by contrast, found himself mired in controversy. Precocious and determined, he had risen through the ranks of amateur boxing in his hometown of Louisville, Kentucky, eventually winning a gold medal in Rome at the 1960 Summer Olympics. On Feb. 23, 1964, just shy of his fourth year as a professional boxer, Ali (then still known as Cassius Clay) defeated Sonny Liston in a stunning upset to become heavyweight champion. Soon after, he changed his name to Muhammad Ali, and publically proclaimed his affiliation with the Nation of Islam, a Muslim organization that denounced integration and promoted black separatism. As Parks himself observed of the troubled athlete, “his image was in tatters . . . He [had become] in the public eye, not just a loud-mouthed kid but a ‘shameless traitor.’”

A ruminative essay written by Parks and titled “The Redemption of the Champion” appeared in the Sept. 9, 1966 issue of Life, illustrated with three of the 850 exposures he took for the feature. His essay presents Ali in a sympathetic light, highlighting his charisma and humor while earnestly addressing his controversial political and religious views. The article apparently hit its mark, prompting several readers to reconsider their negative opinion of the brash young athlete.

Parks and Ali were reunited for another Life feature in the fall of 1970. A great deal had occurred in Ali’s life and career since their first meeting. After refusing induction into the U.S. Army, Ali was stripped of his title in 1967 and effectively banned from professional boxing in the United States. Convicted of draft evasion, he entered a prolonged legal battle to defend his status as a conscientious objector. During these three-and-a-half years, Ali toured across the country, speaking out against racism on college campuses and in community centers. By the end of the 1960s, antiwar sentiment was widespread, and many Americans came to see Ali as a prescient, courageous dissenter. With his conviction soon to be overturned in the Supreme Court, Ali resumed training. Parks visited him in Miami as he trained for an upcoming fight against Jerry Quarry in Atlanta. Parks’ assertive color portrait of Ali appeared on the cover of Life’s Oct. 23, 1970 issue, paired with the headline “Look out — he’s back.”

These two features — the first, published at the height of controversy surrounding “the champ,” and the second as Ali prepared for his comeback — frame a fascinating moment in the fighter’s early career. With an astute awareness of the persuasive sway of “the press” on public opinion, Parks used his talents and the vast and influential platform of Life magazine to present a nuanced and sympathetic portrait of Ali as athlete, private man and controversial cultural icon during this pivotal period.

Gordon Parks X Muhammad Ali: The Image of a Champion 1966 | 1970 celebrates the meeting of these two enormously talented and influential Americans, whose remarkable achievements went well beyond the pages of a magazine and a boxing ring to reshape the annals of history. The exhibition will be on view at The Nelson-Atkins Museum of Art from Feb. 14 through July 5, 2020, and features approximately 55 photographs from these two assignments, the majority of which were never originally published.

This exhibition is organized by The Nelson-Atkins Museum of Art in collaboration with The Gordon Parks Foundation. In Kansas City, the exhibition is supported by the Hall Family Foundation and Elizabeth and James E. C. Tinsman.