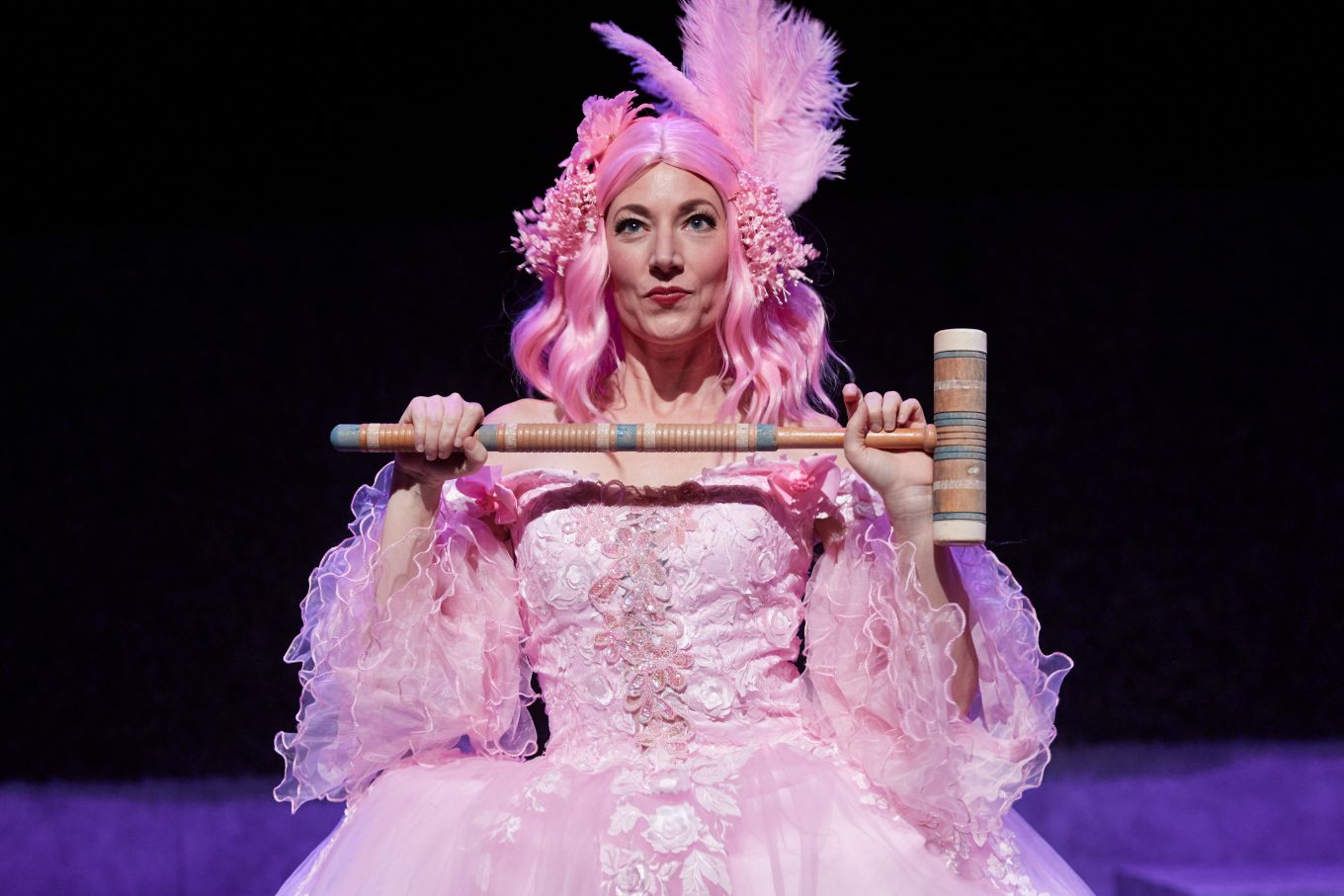 Christina Schafer in “The Pests” (Brian Paulette, courtesy of KCAT)

It is an unfortunate truth that a large percentage of the population continues to write classical theater off as being inaccessible or uninteresting. A lot of people have this sort of avoidance to everything from Oscar Wilde to the Greeks but it seems especially tragic for a playwright like Molière who, for one thing, doesn’t have his work produced on the same scale as, say, Shakespeare and therefore has less opportunity to prove his accessibility. But it’s also an unfortunate stigma because Molière’s plays are, above possibly all else, fun.

Molière’s work is fun and funny and musical in its nature. It’s also catty—delightfully vicious, really—and entirely relatable. It’s a shame that so many people today will not know that because of preconceived ideas of stuffiness and inaccessible language. For those people, consider Kansas City Actors Theatre’s production of The Pests a wonderful entry point into the whimsical and completely approachable world of Molière.

The story centers on Éraste, who is in love with Orphise but cannot meet with her due to a seemingly unending series of acquaintances passing by and demanding his attention. The play itself is less a progressive narrative than it is a character (and a societal) study, which is well aided by its approximately 70-minute runtime and director Matt Schwader’s relentless pacing. The play drives with such forceful energy that the moments when that pacing slips and a lull causes that energy to drop are jarring, but they are also rare.

Molière’s “Les Fâcheux” is most commonly translated as “The Bores,” but “pests” truly does seem to be a more appropriate moniker for the characters we meet in this play. Each character bursting through the scene annoys Éraste in a different way, unique to their archetype. And while those archetypes might be from 17th Century French court, the feelings of annoyance they evoke are, for the most part, all too relatable.

KCAT’s production leans in hard to an intentionally anachronistic aesthetic. This sort of doublet-meets-pop stylizing isn’t new, but it’s often implemented in the form of sporadic, half-baked design elements. That’s far from the case here. Georgianna Londré Buchanan’s costume design is a seamless mash-up of traditional elements with sparkles and sneakers—not applied haphazardly, but tailored specifically to each character with incisive thoughtfulness.

Molière’s original script was a comédie-ballet, with musical numbers woven throughout the production. Here, choreographer Ron Megee mixes courtly moves with voguing, set to modern artists like Todrick Hall and Bitch & Animal. The effect could easily be clumsy telegraphing at modernity but that’s not the impression—it’s genuinely fun and injects the play with bursts of clever playfulness.

KCAT’s slogan is “Great actors. Smart plays” and this is definitely that. It’s also a nice achievement for Kansas City’s cultural scene, as the production is of a brand new translation by Dr. Felicia Londré, a Curator’s Distinguished Professor Emerita of UMKC.

Dr. Londré’s translation highlights the show’s whimsy and the cast does an impressive job of handling Molière’s language. Written in rhyming couplets, it can be easy for an actor to let the language overwhelm them, and to have it all end up sounding like a grade-school poetry recital. In general, this cast wrangles the text well, not just making it easily intelligible but really utilizing the poetry to enhance their characters. There are some standouts—Chioma Anyanwu and Christina Schafer as a pair of friends debating the best qualities in a lover and Jan Rogge as Orphise’s overbearing guardian deserve special praise here, but the cast is stacked with talent adept at navigating this sort of language.

This production of “The Pests” is part of KCMOlière, a multi-year-long celebration of Molière’s works, French culture, and Missouri history, leading up to the playwright’s 400th birthday this month.