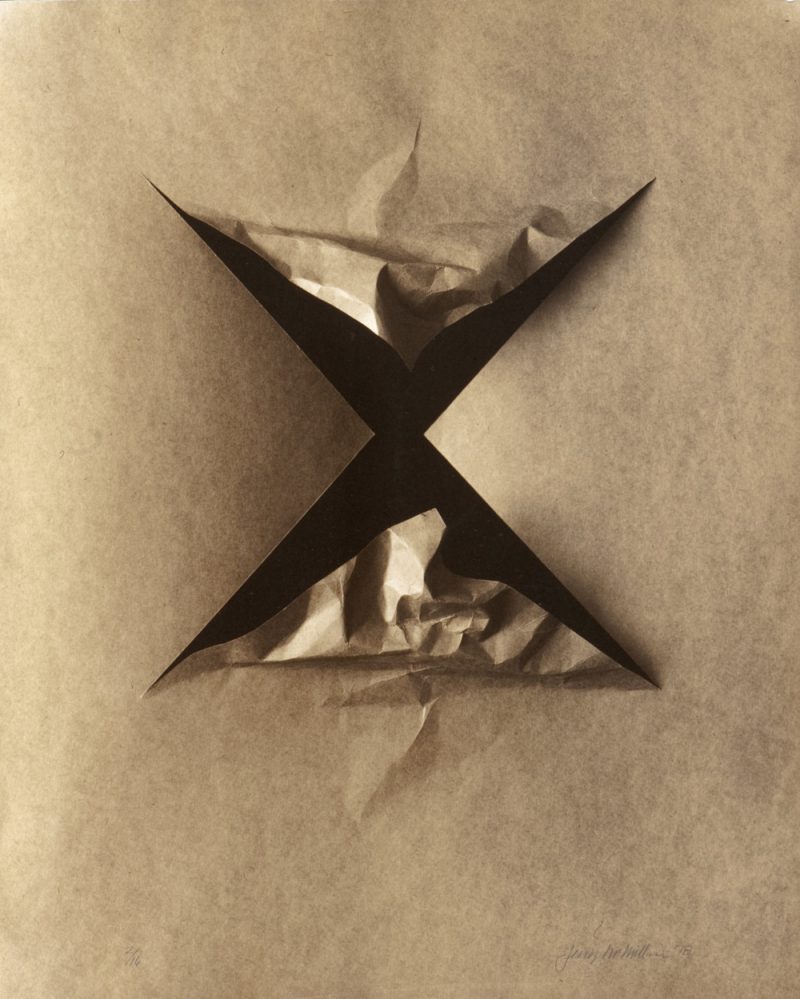 The myriad of images we absorb every day — viewed online as news and entertainment or through social media platforms — are often far from faithful depictions of the world we inhabit. Digital manipulation software facilitates image enhancement and alteration on a scale unprecedented since photography’s invention in 1839. We remain both highly skeptical of and surprisingly vulnerable to the truth claims photographs make when conveying information. Does the old adage, “seeing is believing” hold any legitimacy in our current cultural and political climate? Do photographs accurately convey visual truths? Or do they merely present illusions?

The 25 artists featured in our current exhibition, Art of Illusion: Photography and Perceptual Play, explore these questions in a refreshingly old-fashioned manner, working almost exclusively without darkroom trickery or digital editing tools. Instead, they play with the magic of camera optics and implement clever, conceptual conceits to question the ways we interpret and understand subjects through photographic representations.

The majority of the works date from the 1970s to the present, and include key early practitioners from this period, such as Tom Barrow, John Divola, Kenneth Josephson, Zeke Berman, Jerry McMillan, Marcia Resnick, Abe Morell, Graham Howe and John Pfahl (to whom the exhibition is dedicated). This generation of photographers challenged certain modernist strains that dictated the way photographs “should” be framed, printed, and presented, with as little indication of the photographer’s presence as possible. By contrast, these artists made a point of revealing the artist’s hand, pointing out that all photographs are subjective constructions.

One group of works, by the artist Jerry McMillan, appears so similar to the original subject matter that it becomes almost impossible to distinguish between the photographs and the things they record. McMillan began by creating brown paper models, carving simple geometric shapes, crumpling the edges and lighting the works to create dimensionality. He then photographed the cut-outs and toned the prints to emulate the brown color of the original material. The final prints appear as near-exact replicas, though they are actually multi-layered photographic transformations.

Recent works by a younger generation of artists, including Lilly McElroy, Rodrigo Valenzuela and Liat Elbling, extend these explorations to the present day, merging ideas gleaned from performance, video, sculpture and painting to craft illusionistic and politically inflected spaces. McElroy, an artist based in Lawrence, Kansas, inserts herself into dramatic sunsets in her series I Control the Sun, using forced perspective to make it appear as though she contains the sun in the palm of her hand. Though the work is playful, poking fun at our penchant for repeatedly photographing such cliched subjects, the artist also strikes a serious tone, hinting at the hubris of humans who attempt to control forces far greater than ourselves.

Internationally recognized contemporary figures such as Thomas Demand and Hiroshi Sugimoto use photography to probe the nature of reality and representation, prompting us to reexamine the faith we place in photographs as evidence and history. In the work Daily #25 for example, Demand photographs a paper model featuring constructed artificial cheese slices, which was itself based upon a mundane image he took on his camera phone. Demand here calls into question the significance of such imagery — pictures that grab our attention on social media but soon fade from memory — as historically important records of our current cultural moment. Other artists, including Michael Bishop, Ruth Thorne-Thomsen, Vik Muniz and the Swiss duo of Cortis & Sonderegger, look to iconic works form the history of photography itself as inspiration. Both Muniz and Cortis & Sonderegger recreate Dr. Harold Edgerton’s iconic, high speed image of a milk drop as it splashes into a liquid pool to create a “milk drop coronet.” Where Muniz rendered his version in chocolate syrup, Cortis & Sonderegger recast the image in three dimensions, photographing their studio model in situ and making no effort to hide their trickery. Collectively, these recreations call our attention to the fabricated nature of photographs as well as the trust we place in scientific images, like Edgerton’s, which record phenomenon we are unable to see with the unaided human eye.

All of the artists included in Art of Illusion take the viewer’s position into consideration as an integral component of the work itself. This approach makes for a highly engaging and enjoyable experience, as viewers are invited to decipher visual puzzles or contemplate the philosophical ideas that underscore these photographs. Whether creating optical illusions or calling attention to the constructed nature of photographs, these artists invite us to contemplate the many ways that photography shapes and challenges our perceptions.