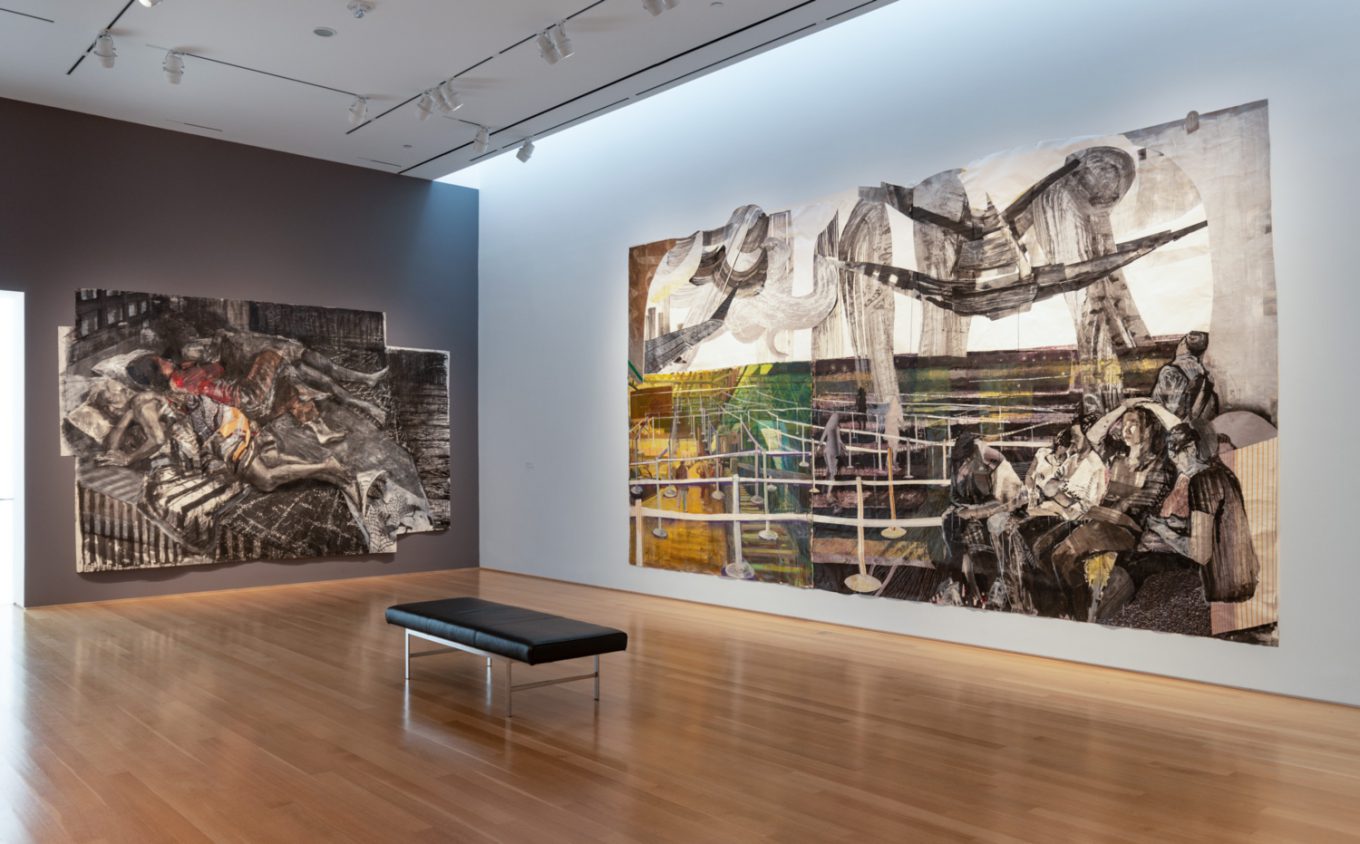 Installations in three distinct Nerman Museum spaces evoke the domestic and the public spheres; scale and placement of the sculptures and paintings propose unique museum experiences, each subverting the modern “white cube” architecture. These are excerpts from interviews conducted with the artists.

When you received the award in 2020, what were you initially planning for your exhibition?

KL Initially when I was thinking about the exhibit, I had started on a painting that was a crowded airport scene, crowds at LAX, remembering my grandma and I arriving at the airport, greeted by family members already here in the United States . . . if you look really carefully you can probably notice a few more figures in there, but it’s mostly obscured by this image on the surface. And it is an image of my grandma . . . my mom and my grandma live in Taiwan. So a lot of our connection in the last year and a half is through FaceTime . . . that image specifically was a snapshot of my grandma in a subway station in Taiwan. So, it’s just this really interesting collapse, like this crowd scene to this really empty, very solo or solitude type of image.

g This space was really a response, talking about the pandemic and everyone’s experience. I feel like this show was also a response to my experiences during that “hermit” and alone time with myself . . . I knew I wanted this space to be green; that’s something that I knew from just thinking about ideas in 2020 . . . then I added the wall addition, because I knew I wanted to separate this space and have it feel like two spaces . . . something that I’ve been thinking about a lot is like altar spaces within my installation work, especially within gallery and museum settings, and so dividing that room just presented the opportunity of having these two altars that spoke to one another.

Cory, what does it mean to you to have your artwork visible when people are approaching the museum building?

CI The architecture of the space definitely stands out, those huge windows and those tall ceilings in the atrium, and then I’ve always really liked that staircase and geometry . . . I wanted to pull in that stairway because it’s always been a really interesting architectural space . . . the whole campus is built on a grid, and then you get to the museum, and that stairway is where part of it jets off at this odd angle.

How do you feel about your ribbon work Linear Spaces (blue) serving as a portal?

CI I’ve never installed those pieces in this way before where it’s not optional . . . so installing them in this way is a really different way of activating the space, because I guess people could go up the stairs and go around, but it really is saying like, “you have to pass through this,” which I think is kind of interesting.

glyneisha, how important are the walls when it comes to physical and temporal boundaries in your work?

g For the plant shadows that’s definitely a matter of scale, but also a gesture of taking over this space. I really like to command the space as mine, and my people’s, and so I take those shadows, up to the wall, and have a moment of forcing the viewer to raise and lift their head and look in the shadows in the cracks in the edges; I think that’s also about being seen.

Kathy, the large scale of the figures in your work might make visitors feel like they are participants. How do you feel about these imagined relationships?

KL Part of my hope is like, standing in front of these pieces, it does feel enveloping, right? Like I feel you’re kind of absorbed into the space like you’re part of the space, especially in relevance to the In Between the Lines piece and also the Liu Nian piece. I want you to feel that you’re existing in part of that space. I do feel like that piece Without with my grandma, my mom, my father . . . that is probably the most intimate piece of the three. It’s like an interior space, even though it is monumental size, but it is an intimate space, and in many of my pieces I think about relationships, of myself to my family.

Cory and glyneisha, what conversation do you imagine your works having together?

CI They’re all separate pieces, but I wanted them to operate as one kind of environment, or one space, and I’m also really interested in the blurriness between what the work is and what the space is. And oftentimes my installations are pointing it at things in spaces that you’re not supposed to look at, with the ribbon pieces with Linear Spaces, the points where they attach are not at the normal hanging height.

g For me, home is through color and through these very specific objects. Some of the objects in the jars were family artifacts. The masks were masks that I grew up seeing in my mom’s home. And so that sense of safety and belonging is something that fuels the show from the very beginning, but the other components were inspired by “everything goes” like everything is in conversation to each other within my installs, I would say.