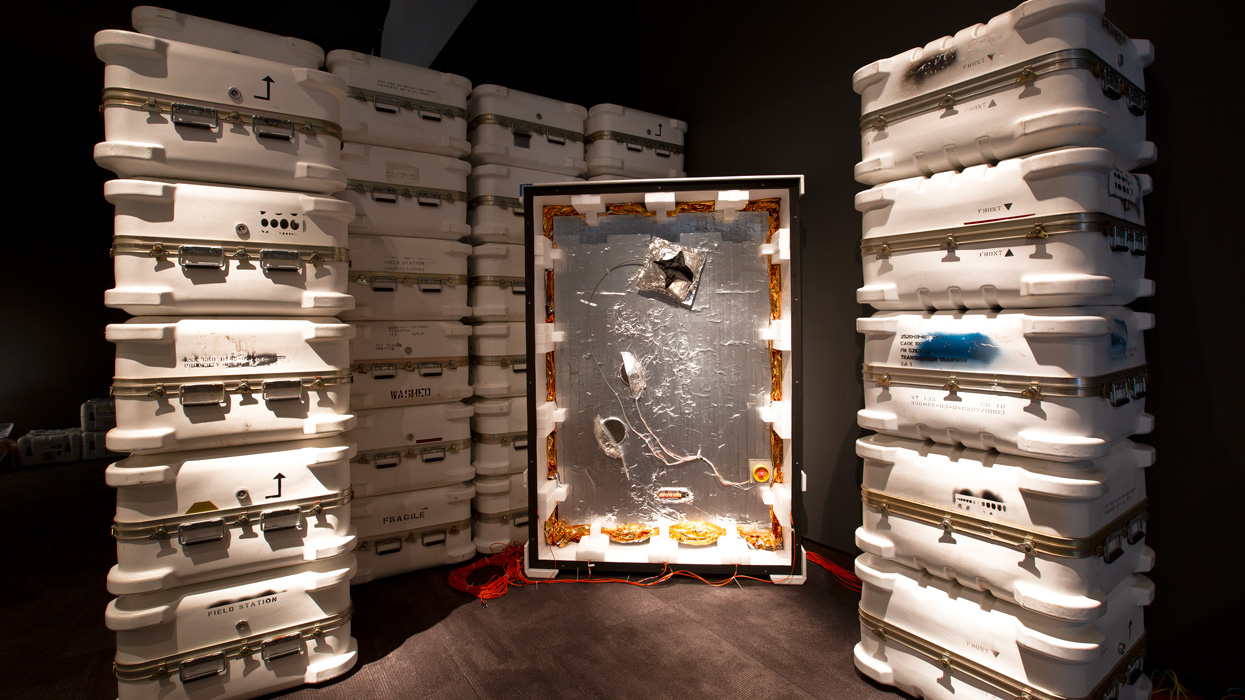 “Field Station 4” “is designed as a place to detach from the outer world, to tune out, or in, to contemplate the nature of information, reality, the other, the future,” says artist Charles Lindsay. Lindsay’s immersive installation, now on view at the Beach Museum of Art in Manhattan, Kansas, features repurposed equipment cases from the Iraq and Afghanistan wars. (photo by Charles Lindsay)

Artists have engaged technology to aid and enhance their creations at least since the Renaissance and possibly as early as prehistoric times. Consider, for example, David Hockney’s book “Secret Knowledge: Rediscovering the Lost Techniques of the Old Masters” or Penn & Teller’s documentary “Tim’s Vermeer.” Both make a compelling case that the camera obscura, a comparatively simple optical device, was a revolutionary technological breakthrough for artists’ capacity to render images with great accuracy and linear perspective.

Now that we are marching with reckless abandon toward the high-tech crisis point known as The Singularity, contemporary artists appear to comfortably employ all manner of technology as both artistic tool and subject of contemplation. A cross section of current exhibitions in our region shows an inventive array of art-meets-tech explorations laced with unsettling consequences.

Lindsay, a former exploration geologist and photojournalist who lived for a while with a shaman in Tibet and did research at NASA Ames, brings a broad range of experience and knowledge to his “Field Station,” including his current work at the Search for Extraterrestrial Intelligence Institute in Mountainview, California.

One can hear the eerie soundtrack gurgling from the Field Station as it draws the visitor into a cluttered, darkened space. Enclosed by dozens of white stacked equipment cases marked with unsettling stencils like “ALL FLUID DRAINED,” and thick bundles of colored cables snaking through the space, it feels like entering an abandoned space station in which the scientific research has taken on a strange sentient twist.

One of the cases is splayed open to reveal a small bronze sculpture of a fierce Buddhistic deity wired up to a circuit board with an emergency off button. A small video screen shows two metallic balloons anchored to a large rock in a mountainous landscape. Is this science fiction or just weird science? Both would apply, and the visitor, as the only human presence in the space, is left to ponder just what scientific paradigm has been discovered here.

Lindsay provides a clue in two adjacent works that feature the ancient and medically important horseshoe crab, one of the oldest species to continuously inhabit our planet.

In a case resembling a fish tank, several gilded crabs with their distinctive helmet shapes are illuminated from below with erratic flashes of bluish light suggesting a communicative capacity. An underwater soundtrack clicks and pops like a pod of intelligent cetaceans from a small speaker. Buddhist iconography appears again in the form of a painted wooden panel inside the case. Can marine organisms be Buddhist too?

Clad in aluminum tape, the horseshoe crabs become slithering cyborgs in another large storage case in which they are halved to reveal their hybrid technological undercarriage. They are tethered to an emergency shut off button and a whizzing 12-digit LED countdown clock with a mysterious ravioli-like form bursting its carbonaceous guts.

At the back of the installation, one discovers the source of the sci-fi sound effects. A transparent canister, connected by hoses rising to the rafters, holds chunks of fluorescent minerals that sound like they’ve come from deep Earth or deep space. Towers of stacked equipment cases add to the claustrophobic atmosphere and the mystery of the seemingly abandoned Field Station.

Outside the main exhibition space, another bizarre object defuses the tension with a bit of levity. “Early Tibetan Computer,” a clunky old desktop computer outfitted with yak horns, provides another clue to the artist’s interdisciplinary intent. Charles Lindsay’s “Field Station 4” points to an expanded consciousness where science and shamanism, inquiry and imagination, intersect in the fluid boundaries of contemporary art.

A Tech Trio at the Ulrich

A trio of solo exhibitions at the Ulrich Museum of Art in Wichita, Kansas, addresses parallel artistic responses to the increasingly insidious relationship between humans and our technological creations.

Things that seemed outlandish almost a century ago, such as Betty Boop’s wacky, lifelike machines, have now come to pass in the form of Internet-connected doorbells, drones and dolls. Beloff’s related film, “The Cognitive Era,” mimics a slick corporate animation and lays bare the frightening economic motive behind the so-called Internet of Things: nothing short of complete domination of the biological sphere from cradle to grave. Surely that’s a fair price to pay for consumer convenience. Right, Alexa?

On a somewhat lighter note, Beloff plays with the now ubiquitous emojis that standardize our emotional responses into reductive digital icons. In a triptych of large panels, she presents uniform grids of expressive facial drawings. One panel calls to mind Charles Darwin’s pioneering scientific investigations into human and animal emotions as registered by minute variations in facial musculature. In another, she plays with the origins of several familiar emojis by exaggerating the features and restoring the nuances inherent in the human face.

Beloff extends this study in the projected video “Future Emoji” with real human faces masked into the circular format of the emoji with their corresponding color tints. Her rehumanization of the form reminds us that much emotional experience is lost in translation to digital platforms. However, the larger implication in the work is that through our voluntary interaction with the AI behemoth, we are teaching it how to emotionally manipulate us into predictable behavior — monetized for life and beyond.

Drawn from the Ulrich Museum’s permanent collection, “Lee Adler: A Mad Man Amid the Machines,” includes “Reclining Figure II” (1974), reflecting the artist’s preoccupation half a century ago with a society in technological ascent. (Ulrich Museum of Art)

Curated from the Ulrich’s permanent collection, “Lee Adler: A Mad Man Amid the Machines” brings to light a little known painter and printmaker active in the 1960s and ’70s. Lee Adler (1926-2003), a native of Brooklyn, worked on Madison Avenue in the advertising industry before honing his skills as a graphic artist preoccupied with a society in technological ascent. His flat, hard-edged machine forms, rendered in the bright color schemes of Pop art, coincided with the development of cybernetics and systems art. Adler’s work retains a surprising conceptual relevance 50 years later — the convergent evolution of technological humans a.k.a. cyborgs interacting with ever more humanistic robots. How long before we can no longer recognize the difference?

One of the many consequences of the Digital Revolution has been the irreversible transformation of the photographic medium from a chemical process of image making to an electronic one. In the process, our relationship to the photographic image has destabilized from one of reliable representation to unprecedented manipulation. Photoshop and Instagram filters are commonplace, but now we face “deepfake” videos and de-aging movie actors that point to a breakdown of trust in the image itself.

That crisis in the medium becomes an opening for artists like A.P. Vague who exploit the tools of manipulation to discover the layered potentials of digital image making. Vague’s exhibition of “Digital Palimpsests” comprises giclée prints and moving image works that range from painterly to geometric abstraction with ghostly traces of representation. Sometimes referred to as glitch art, Vague’s work celebrates the open-ended process of liberating images from their original matrix.