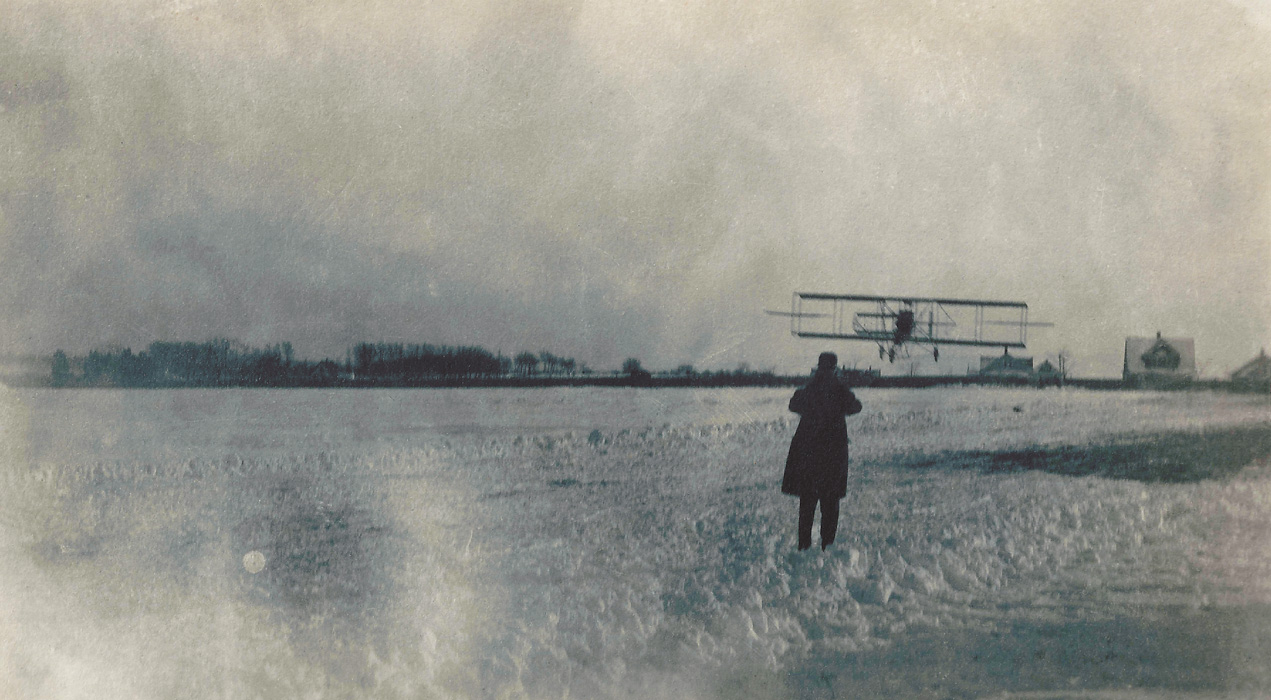 Six years after Orville and Wilbur Wright had taken to the air outside the tiny coastal fishing village of Kitty Hawk, N.C., eager spectators ventured out to a field near 79th and Floyd streets in what’s now Overland Park for their own first look at a heavier-than-air flying machine. It was a cold Christmas Eve 1909.

Pilot Charles K. Hamilton — just beginning to build a daredevil reputation as the “crazy man of the air” — was in the Kansas City area for a series of aerial demonstrations. This was to be a quick test flight. Workers cleared a path through some four inches of snow, the Curtiss biplane was wheeled into place, and its motor fired. Hamilton shouted, “let ’er go!”

The plane raced downhill and caught air, flying a short distance before its tail dipped and hit a tall fence post. Hamilton nonetheless landed safely. On Dec. 26, with hundreds looking on, he took off again and narrowly missed telephone lines and a house. A day later, while performing a figure eight, he clipped a wing on a haystack and abruptly set down.

An undaunted Hamilton made several more flights before moving on to California for an air meet in January. Behind him, a new era dawned in Kansas City.

As its latest chapter unfolds, and construction of a new $1.5 billion, single-terminal iteration of Kansas City International Airport moves toward completion in March 2023, a new exhibit at the Kansas City Public Library charts the rich history of air travel in the city and surrounding area. ‘Nearest by Air to Everywhere’: A Tour of Kansas City’s Aviation History was to open on the fifth floor of the downtown Central Library in May, awaiting the Library’s return to full operations in the wake of the COVID-19 pandemic.

It will remain on display for nearly two years, through the opening of the new KCI.

“I really think it provides, if not a comprehensive history, a concise history of aviation in Kansas City,” says Jeremy Drouin, manager of the Library’s Missouri Valley Special Collections and co-curator of the exhibit with Exhibits Director Anne Ducey.

“To be honest,” Drouin says, “even though I work in the history room of the Library and was aware that Kansas City had a deep aviation history, that TWA was headquartered here, I never thought of it as a U.S. hub for air travel. But when I took a deep dive . . . I found out that in the 1920s and ’30s, looking at commercial aviation, manufacturing, flight schools and the number of aviators who set roots in Kansas City, it really was the hub. And it made sense.”

The city sits, after all, in the middle of the American map, with no surrounding mountains to complicate flight paths. It already had been a hub of transportation by water, by overland trail (the Santa Fe) and by rail.

Civic visionaries including Lou Holland, president of the Kansas City Chamber of Commerce in the mid-1920s, saw the possibilities in the sky and seized on them, promoting the city as “nearest by air to everywhere.” Then came a succession of airports. A cross-country airmail stop. Flying schools and a B-25 bomber plant during World War II. The successful pursuit of a hometown airline, TWA.

“Personally,” says the Library’s Ducey, “I think the story of early aviation is fascinating and very romantic. This exhibit will be particularly interesting for visitors in light of the new airport. I think they’ll appreciate even more the beginnings of aviation here and how far it’s come.”

Chock-full of vintage photos and other images, the winding lobby exhibit actually starts its timeline more than 40 years before Hamilton’s historic series of flights. On July 4, 1868, a crowd of 8,000 spilled onto rooftops and other high vantage points to view the first manned hot air balloon ascension in the city — a scene right out of Oz.

Piloted by famed aeronaut John H. Steiner, the balloon climbed nearly 10,000 feet, caught a northwesterly current, and floated eight miles to a landing on a farm near Parkville. Steiner later wrote glowingly of the magnificent landscape beneath him: the Missouri and Kaw rivers “shining bright as a mirror through the blue ether,” the “mingling of the forests and emerald valleys, fields of golden grain and waving corn . . . a picture of vast proportions, and richness of coloring, that few mortals ever enjoy.”

The Library exhibit draws heavily from vintage photos and other images in its special collections. Drouin and Ducey also pulled in material from the Kansas City Museum, the Jackson County and Overland Park historical societies and other cultural partners.

The exhibit is the first to open in the Central Library since the pandemic struck in March 2020. Ducey also is plotting the reopening of two formal galleries on its first floor and mezzanine level.

“Libraries are so much more than book repositories,” she says. “We take great pride in being a cultural and educational center. The exhibits we normally have, and will again, allow people who might not make a special trip to see an art or history exhibit to experience something new and perhaps come away feeling enriched.”

The sky’s the limit.