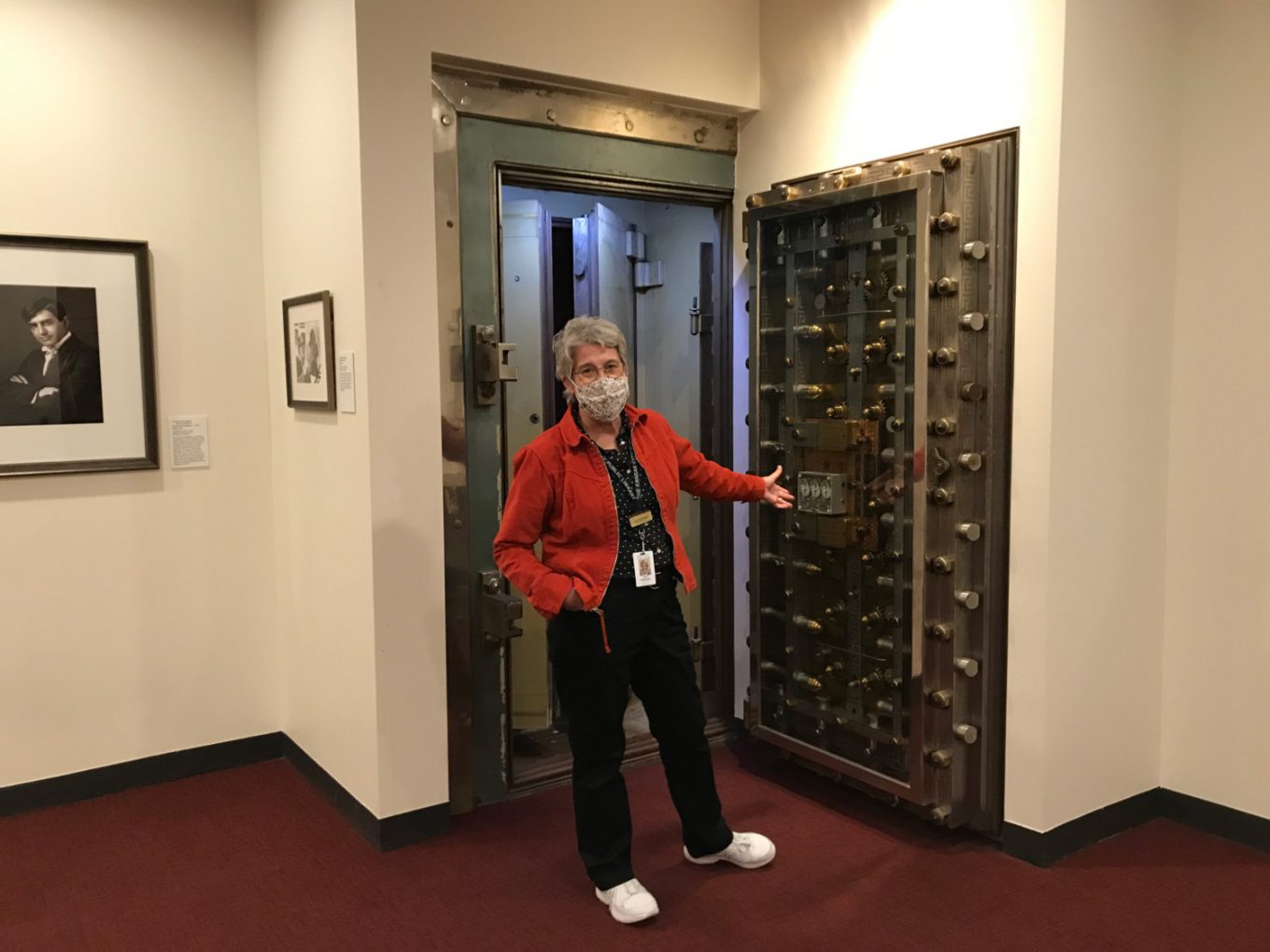 Clare Hollander with the vault door that’s on display but doesn’t go to anything.

Ninety-eight years apart, almost to the day, the marble-columned building at 14 W. 10th Street in Kansas City, Missouri, hosted grand openings. The first was the First National Bank ribbon cutting on April 15, 1906. The second was on April 12, 2004, when doors opened to patrons of what is now the Kansas City Public Library’s Central Library.

The building saw a lot in the years between its openings: near-wild west banking practices, Tom Pendergast-era gangsters, Prohibition police dodging — a bullet hole in a south-facing window on the third floor is a lasting scar of one of these eras.

Because of its rich past, rich lore is also a part of the building’s fabric. Stories about tunnels are a favorite, but just as they’re hidden from sight by the roads, the truth about them is similarly obscured by time.

For roughly 15 years, Library staff members, including Hollander, have offered tours, mostly to school groups, of the building’s nooks and crannies. But lore remains the operative word in any interaction about the space; it’s difficult or impossible to separate fact from fiction — even in a well catalogued library.

Teresa Bolton, the Central Library’s director of operations, explains that the bank’s early days were prior to the existence of the Federal Reserve, so the bank had to print its own money. Moving large sums from place to place was risky, thus the need for a safe transport route.

“This was the financial district at the time,” Bolton says, “so they wouldn’t be taking carloads of money from the bank; they’d go under the streets through the tunnels.”

But where the tunnels ran and how anyone accessed them is harder to say.

The smooth dark wood paneling of a first-floor boardroom is interrupted by the seams of a door — it doesn’t open, but the pry marks opposite the hidden hinge are evidence of just how curious people have been about what’s behind it.

Maybe the door opened to a stairwell, which led to the tunnel.

Another thought is that the panel hid the bank executives’ bootleg liquor stash and not a staircase at all.

But Dean Galloway, a retired library project manager, says to forget about secret tunnel entrances and the hidden bootleg altogether.

He says the tunnels were only made of “large bricks, about the size of a cinderblock. Quit fantasizing about these movies; tunnels are not elaborate and well kept,” Galloway says.

But it’s true that tunnels did run from one bank to the next, and that beneath the sidewalk around the perimeter of the Central Library is an underground storage area considered to be part of the underground system.

He also points out that, as far as he knows, the most fascinating features — also the stuff of movie fantasies, like bootleg storage panels — were likely eliminated in the 1964 renovation, when the building was still a bank.

Something he finds interesting, though, is that before the Library moved into the building, it had to decide what to do with 18 vaults. Engineers removed 16 of them, but kept most of the ornate doors, like the two on what’s now called the “vault level” where the theater is.

One of the remaining vaults is a storage room, and the other is home to the Stanley H. Durwood Film Vault minitheater, a 20-by-30-foot movie theater that seats 28. The theater door — which remains open — dates to a 1926 bank addition and weighs an estimated 35 to 40 tons.

Also on that level is a vault door that’s simply a display so that patrons can see the intricacies of the door’s machinations.

Hollander says that one of the best parts of telling library tales to groups is seeing people realize that the library isn’t “some magical special place. This is our place. You get to be here any dang time you want and can take whatever you want.”

All photos by Anne Kniggendorf