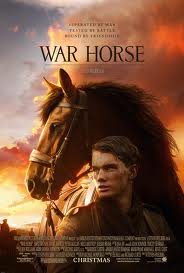 Releasing on Christmas Day, “War Horse” is the tale of a beautiful stallion from his birth to his time spent in World War I.  Directed by Steven Spielberg, the film is based upon a children’s novel of the same name, which was also developed into a play.

We begin our two and a half hour journey in England where Albert (played by Jeremy Irving in his first major film role) witnesses the birth of a neighboring horse. There is not much dialogue as Spielberg builds up the early stages of the boy and the young colt through his camera work. The young stallion soon goes to auction where Albert’s father, Ted (played by Pete Mullan), outbids his own landlord for ownership of the steed. The catch is that Ted doesn’t need a stallion; he needs a workhorse to plow his field. Being in a tight financial situation with his landlord, Ted realizes his egotistical folly. Soon, it is young Albert that takes the reigns, literally, and trains his new horse, Joey, to plow the field.

As in life, all of Albert’s hard work doesn’t necessarily pay off and Ted eventually sells Joey to the British Army since the country is being drawn into WWI. Joey becomes property of Captain Nicholls (played by Tom Hiddleston) who trains Joey to be a War Horse with the army. We are introduced to our first taste of war from the horses’ point of view. We witness the strategy and the importance of the horse during WWI. 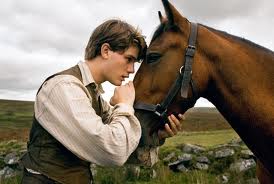 After a while, we are reminded that Albert still wants his horse back, in fact he has found his way to the front lines of the trench warfare in France. While on the other side of “no man’s land” is his old friend, Joey, who has made a daring horse versus war tank escape. Joey becomes entangled in barbed wire. An English and a German troop work together to free Joey from his predicament. This was one of the only emotionally moving scenes in the film, two enemies working together to free a horse then retreat to their trenches knowing that they will be meeting again under more hostile circumstances.

Should you see this movie?  If you are a horse lover or interested in WWI, then yes. As always Spielberg does a great job telling a story and also pulling his audience into battle. Some of the war scenes were reminiscent the opening scenes of “Saving Private Ryan.”  However, much of film felt flat, there were not a lot of tearjerker moments. With Albert being out of the picture so long, it was difficult to feel much for the reunion with his best friend