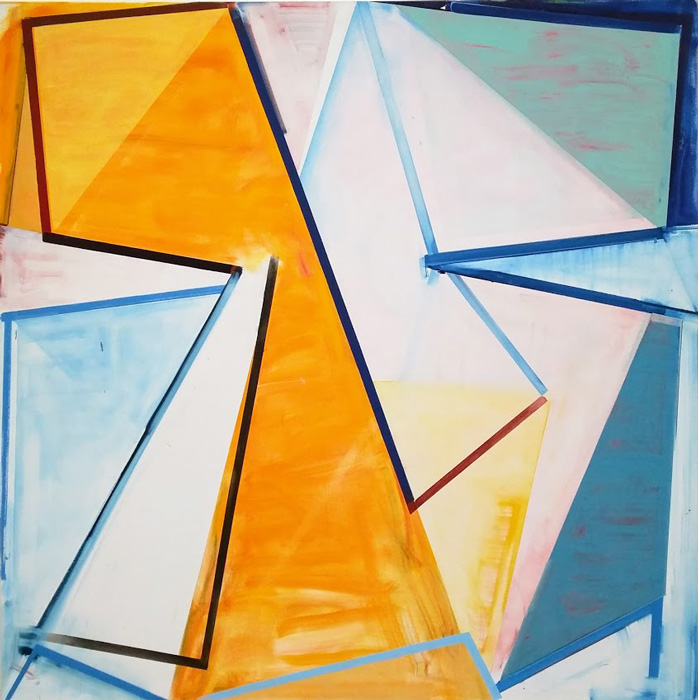 When Warren Rosser settled into his enviable Crossroads studio he made sure to get the lighting just right. For a seasoned painter exploring color relationships in depth, the results have been transformative.  “Loitering with Intent,” his first solo exhibition at Haw Contemporary, features more than a dozen new paintings by a masterful abstract colorist at the top of his game.

Rosser’s surprising point of departure for his new body of work is a large sculptural construction of irregular plywood cutouts tightly skinned in contrasting fabrics of cheerful plaids, bold stripes and delicate patterns. Titled “Ready to Wear,” the assemblage of layered curves and folded corners juts out onto the gallery floor in satellite pieces like a fashionably dressed escapee from Kurt Schwitters’ Merzbau.

He made this work almost a decade ago as an experiment in painting without paint, pushing his polygonal forms outward from two to three dimensions. Though it wasn’t particularly well received at the time, something new was unfolding.

In the first of three galleries one can trace the through line from Rosser’s fabric construction to his practically perfect 2015 work “In the Blue.” One gets the feeling that oil painting was no longer a sufficient medium to contain the pyramidal forms that extend organically off the flat picture plane into a dynamic three-dimensional wooden appendage.

In “Custom Fit” the origami-like composition folds and unfolds from the canvas into another constructed pendant. Only this time the application of paint is noticeably thinner, the colors are muddier and less harmonious but the architectural scaffolding remains robust.

Around the corner in the middle gallery Rosser’s work returns to the rectangle but the stacked geometric planes of color are more loosely painted. His use of a rag instead of a brush leaves behind ghosts of under painting. In works like “Site Markers” strong diagonal lines fracture the foreground suggesting multi-directional movement. Between the complex folds ethereal spaces hover in the background.

Rosser has always been a disciplined painter accustomed to creating bodies of work in a methodical, linear progression. These days, in his clean, well-lighted space he’s “Loitering with Intent” as the exhibition title suggests. But make no mistake; he is an artist engaged in profound play.

One can see this in the largest gallery where eight large canvases reveal lighter, brighter, messier veils of color. The polygon shapes are decompressed in the picture space and the artist’s gestures are plainly visible in swipes of pale greens, warm yellows, and orangey reds that exude a spring like air. Rarely seen curved lines make an appearance in “Conjunction,” giving one the sense that Rosser is letting his hair down, allowing the work to run ahead of him a bit. No worries, he’ll catch up with it. Sometimes it’s better not to know where it’s leading.

The practice of “painting” with textiles continues upstairs with exquisite work by Debra Smith produced for her recent exhibition at the Daum Museum in Sedalia. She has developed a sophisticated language of geometric abstraction using a restrained palette of found vintage textiles, usually kimonos, pieced together over translucent layers of creamy silk.

Her larger works are particularly striking with powerful compositions that project toward the viewer, as in “silence is unclear 1.” Simple rectangular shapes with dazzling surface patterns make for compelling spatial relationships in “Looking Forward,” while the soaring curves in “Transition of Two #1” envelop a stripy silk collage that revels in its flatness.

One must get close to the work to even detect the fine stitching and layering of subtle textures involved in Smith’s process. However, the artist’s intrinsic understanding of her found materials and their ingrained histories are evident. One might be looking at a piece of that tie you bought your dad umpteen Christmases ago.

Whether one has a passion for minutiae or not, Samara Umbral’s exhibition of eleven miniature paintings demonstrates her skillful capacity to create vivid works in a tiny, two-inch space. Equally adept with oil, watercolor and encaustic she is partial to the female form in casual snapshot portraits like “Jess,” “Mimi,” or “Christmas Morning 1991.”

While several of the paintings have a photorealistic quality, the illusion is as often disrupted by more painterly flourishes of impasto like the tracked up snow outside her “State Street Body Works.” Umbral’s versatility can be seen in the impressionist encaustic “Cans” and the moody watercolor “Landscape.” Her evocative images and fine details invite close looking and intimate contemplation.