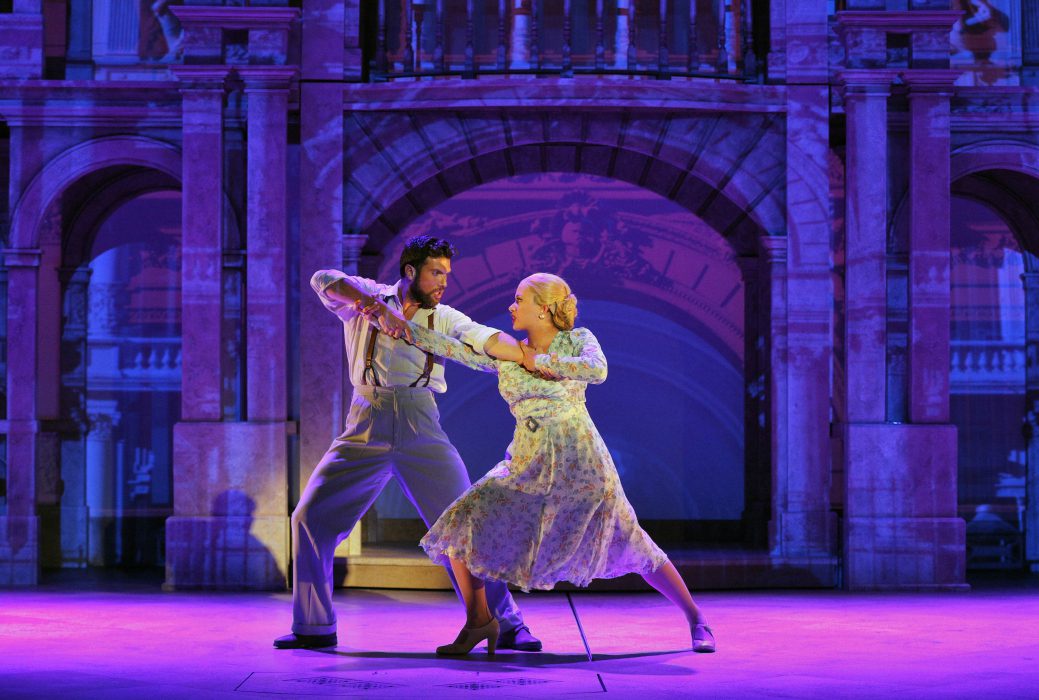 Kansas City Repertory  Theatre kicks off its 2016-17 season with a visually dazzling production of the musical Evita, a modern classic that benefits from the smartest lyrics Tim Rice ever wrote and one of Andrew Lloyd Webber’s most hummable scores.

Evita depicts a version of the rise and fall of Eva Peron, Argentina’s legendary first lady to populist president Juan Peron in the 1940s. After dipping a toe into the complicated history of World War II-era Argentine politics, one sees that this work follows the general arc of Eva’s life and career, even though it may not be strictly accurate in the details.

Eva’s story is that of a radio and movie actress who married a military officer on the way up and became an enormously popular advocate for the poor. As she used her influence to shape domestic policies (and fight for women’s suffrage), she earned the enmity of the upper classes and the military power structure. But the only thing that could stop her was failing health. Even as she entered physical decline she intended to run for vice president.

Rice presents the brutal game of politics as a version of show business. And politics as showbiz is something Americans know all about. Any show that opens with the line “Oh, what a circus, oh what a show,” invites obvious comparisons to the current presidential race, in which the standard-bearer for the GOP is, among other things, a reality TV star. And with his maligned opponent angling to become the first female president in American history, her commitment echoes in one of Evita’s lines late in the show: “Don’t you forget what I’ve been through and yet. I’m still standing.”

But the perceived relevance to current politics is fleeting. Evita is about a specific woman in a specific time and place. Mariand Torres plays the title role and quickly reveals herself to be a charismatic performer with a powerful voice — maybe too powerful. During the first act on opening night, Torres and her colleagues were inexplicably belting at top volume through most of of the numbers. And the pace felt so rushed that the audience had little time to reflect on Rice’s clever lyrics. An exception was the affecting “Another Suitcase in Another Hall,” in which Emily Shackelford, as Peron’s young mistress, creates a feeling of intimacy and quiet reflection.

Mauricio Martinez brings matinee-idol looks and a showman’s flair to Che in the Rep production Che is the narrator and Greek chorus who challenges Evita’s taste for wealth and power. He was explicitly meant to be revolutionary Che Guevara in the initial 1979 Broadway production, which made his from-the-grave reflections on the doomed Evita’s rise and fall both ironic and poignant. In this production Che becomes a sort of Everyman, as he did in the 1996 movie and in subsequent stage revivals. Turning him into a generalized interlocutor dulls the character and the show and muddles its meaning.

Even so, Martinez’s performance in Act 2 of one of the show’s liveliest numbers, “And the Money Kept Rolling In,” was a genuine show-stopper Friday night. And Torres handled the show’s bravura signature number, “Don’t Cry For Me, Argentina” with moments of strength and clear vulnerability.

Nick Duckart, who plays Juan Peron, has the least flashy of the three principal roles but he successfully capture’s the ambitious but cautious Peron’s fear of pushing for power too fast in the lyrically complex “A New Argentina,” a stirring anthem that closes Act 1.

The cast seemed to settle down after intermission and gave the material some breathing room, although two of the strongest numbers, “High Flying Adored” and “Rainbow High” lacked nuance — and would have benefitted from an even slower pace. These lyrics are meant to be savored.

Darrell Grand Moultrie’s inventive choreography repeatedly underscores the class divisions between the elites and the working class. And that’s what this play is about.

Evita is among the most challenging shows in musical theater. Some of Evita’s songs span two octaves and Rice’s libretto requires real actors. These characters are detailed, multi-layered and recognizably human. And even in a less-than-perfect production, the artistry in the writing triumphs. This show packs a punch.

The reason it does is because it brims with often sobering and sometimes comic philosophical observations, many of which focus on the temporary nature of existence. Governments come and governments go. Empires crumble into dust. As the ghost of Evita says: “So share my glory, so share my coffin.”

This material is powerful stuff. And it makes most of what Rice and Lloyd Webber have produced, either as a team or as individuals, taste like pablum.

Evita runs through Oct. 2 at the James C. Olson Performing Arts Center on UMKC campus. Call 816-235-2700 or go to www.kcrep.org. (Note: Mariand Torres will play the title role in Evita through Sept. 20. Jenny Ashman assumes the role for the remainder of the run.)