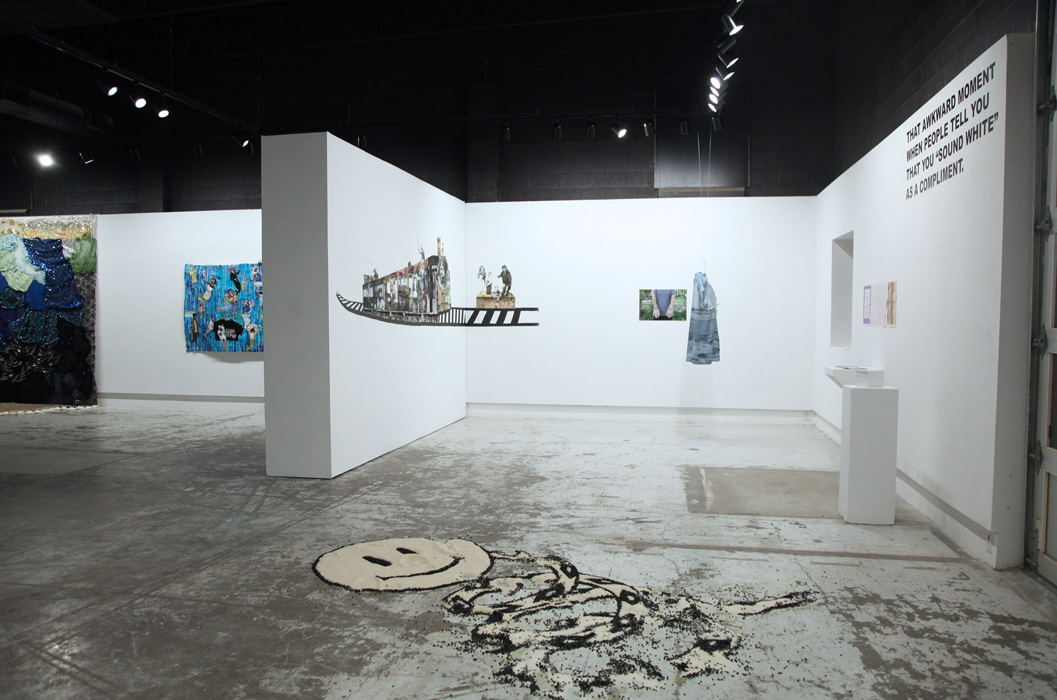 Debates about immigration and citizenship turned into ugly political football in the last election cycle. The truth of the matter, as seen in the exhibition “¿QUE PASA, USA?” is far more familiar, complex and colorful than the public discourse would suggest. Lynnette Miranda, the new curator-in-residence at the Charlotte Street Foundation mirthfully embraces the demographic browning of America by taking the pulse of eleven artists who complicate and expand what it means to be American and a person of color.

“¿QUE PASA, USA?” invokes the spirit of the first bilingual situation comedy of the same name. That groundbreaking ‘70s show found heart and humor in the push/pull of Cuban-American immigrant experiences. Miranda‘s curatorial vision cuts right to the entangled issues of identity, representation, race, and sexuality in a white dominant culture

For example, the exhibition reframes Latin American cultural influence by exhibiting several Latinx artists from across the country. What is Latinx? It’s an inclusive identifier that is neutral to gender, race, or sexual preference. The term marks an important 21st-century shift in the construction of Latin American identity. Bypassing the gender bias embedded in the Spanish language itself: Latino/Latina, it was necessary to create a third term to include queer and people of color who share familial or cultural ties to Latin America.

In Silvia Beatriz Abisaab’s color photograph a young woman with a backpack stops to gaze at a street mural. We can’t see her face as she casually engages the miraculous scene depicting the moment when Nuestra Señora de Guadalupe appeared almost 500 years ago. The iconic image of La Virgen is charged with religious devotion, idealized femininity, and has deep roots in Mexican culture. What could it mean to her, now?  The photograph announces a youthful perspective on fluid cultural symbols, yet the subject of the photograph is sporting some fresh kicks. She’s contemporary, she’s street, she’s folk, she’s Latinx.

Collage figures prominently among the artistic practices seen in the exhibition. Melissa Leandro achieves unusual pictorial compositions and embroidered textures in her abstract textile works. Jacquelyn Carmen Guerrero’s bedazzled backdrop for her fiber installation/performance space consists of dozens of sparkling garments sewn into an Afro-Caribbean crazy quilt. Damali Abrams the Glitter Priestess lives up to her namesake by playfully transforming images of black celebrities into Afrofuturist merfolk. Carlos Ortiz-Gallo uses mixed media, especially personal family photos, to communicate the journeys of an emigrant family in “Whitelash Cannonball.” Abisaab violently mutilates photographs in her video “As I Reflect I Cry” only to re-collage the parts in disturbing arrangements.

It’s impossible to miss the meticulously done floor drawings by Enzo Antonio Moscarella.  In “Don’t Tread on Me” the artist appropriates a potent symbol of the American Revolution, the irrepressible coiled snake of liberty, and remakes it across the gallery in black beans and white rice with three different emoji faces: happy, sad and neutral.

Several text-based works tap into the mundane microagressions that women in particular have to deal with. Michelle Lee’s “I Made a Friend Today “recounts the vulnerability of an immigrant woman navigating friendships with the opposite sex. Kayla Quan’s ‘zine, “U Ain’t That Special,” collects and illustrates several female testimonials of sexual harassment in direct response to the President-Elect’s scandalous caught-on-tape comments. Dominique Carella’s text installations speak to the intersection of colorism — the lighter the skin the better the treatment — and persistent stereotypes of Latin ethnicity and the female body. Telling someone they “sound white” is never, ever a compliment.

The smallest works in the exhibition turn out to have the biggest impact. Maya Grace Misra’s painted miniatures remind us of several dark incidents of American oppression, each satirically memorialized in a Forever postage stamp: the Tule Lake Japanese American internment camp, or the 1928 massacre of striking United Fruit Company workers in Colombia. Other stamp paintings pay tribute to resistance movements like the Black Panther party, or the American Indian occupation of Alcatraz. Misra even takes on the American flag with several multicultural revisions of the stars and bars.

While the exhibition appears to take a lighthearted approach, the veneer of humor thins quickly. Sobering narratives of intensely felt difference simmer just below the surface: we are American too with emotions, families, traditions and cultures. We are here to stay but we don’t feel like we belong. We speak your language but you don’t speak ours. It doesn’t feel safe here. White privilege is real and oppressive. We are surviving and thriving in spite of it.  Is this really a situation comedy?

¿QUE PASA, USA? is an assertive assemblage of diverse materials and lived experiences. It reminds us that American identity is a kind of collage and that our greatness is visible in our coat of many colors. Lynnette Miranda wants to keep the conversation going in several related public programs that aim to facilitate discussion and build community through the run of the exhibition.